It was clear, of course, that there was something evil going on in the old hotel: abductions, murders, shots in the night, all those things had to have some kind of hub, and the hub must be contained somewhere about that secretive place with its deserted corridors and rooms and its rattling shutters....It was as if something very dark and very strong were swirling about, and I knew of the threat of its presence but not where and how to avoid it.

To this day a sudden cold whipping in the wind will snatch my memory back in an instant to those mad days at A------, and I am once more walking cautiously along those cold dim corridors, ears alert to any sound behind me, eyes strained upon every shadow, or I am watching the flying shadows of the court from the eerie glass-walled passage outside my door, wondering if that flying shrub conceals a figure, or if this angle of the walls holds a too-substantial shadow--or peering across to the tiny lobby where I can see the cockatoo....

The mystery novels of Mignon Eberhart (1899-1996) fall, in my view, into three distinct periods:

1936-1988, the over half-century of Eberhart's polished, perfected and highly lucrative formula of mystery and romantic suspense, in which Gothic-style settings are downplayed in favor of the desperately anxious antics of ingenuous and frightened young women confronting murder in fashionable and moneyed milieus

So-called domestic suspense existed before the mid-twentieth century, when it was skillfully elaborated by crime writers Ursula Curtiss, Celia Fremlin, Margaret Millar, Charlotte Armstrong and others.  In the 19th century it was known variously as Gothic and "sensation" fiction and in the Golden Age of detective fiction it was, under the the patronizing cognomen HIBK (Had I But Known), hugely popular in the hands of such authors as bestselling novelist Mary Roberts Rinehart and the writer commonly seen as her closest and certainly most successful acolyte, Mignon Good Eberhart.

Eberhart's Nurse Sarah Keate mysteries, with which the author launched her spectacularly successful career as a mystery novelist in 1929, are reminiscent of Rinehart's Nurse Hilda Adams mysteries, but the chronology here remains cloudy, with no certain light yet discernible on the horizon.  As indicated above, the first group of Sarah Keate novels appeared from 1929 to 1932, while that latter year, 1932, was the year that Mary Roberts Rinehart revived Hilda Adams, in the novel Miss Pinkerton.

So was the great Rinehart inspired by the success of Eberhart's Sarah Keate novels?  Not so fast!  Hilda Adams originally appeared in a pair of novellas, "The Buckled Bag" and "Locked Doors," in 1914, when Mignon Good was but a teenager living in Nebraska.  So was it Mignon Eberhart, then, who was inspired by Rinehart?  You've got me! (Mike Grost has thoughts too.)

In any event, Eberhart herself evidently had tired of Sarah Keate by 1932 and she resultantly dropped the confirmed snooper (along with her handsome police pal, Lance O'Leary) as a series character, though she would revive her (minus Lance) in two later novels, about one and two decades afterwards respectively.

Over the next three years Eberhart published three suspense novels--The White Cockatoo (1933), The Dark Garden (1933) and The House on the Roof (1935)--without any series characters and with less of a formal connection to true detection. Even more than the Keate novels, this trio of books veers more toward pure suspense, though there still is clueing and explanation (quite a lot of it!) at the end.

All three novels have strong Gothic elements in the settings.  Dark Garden and House on the Roof both are set in Chicago, in, respectively, a creepy dark mansion and a creepy dark apartment house, while the events of The White Cockatoo takes place inside a weary old hotel in the town of A------ (Avignon?), southern France, during the wintry off-season, when around the aged walls and windows the mistral wind menacingly murmurs and moans.


In America's Agatha Christie, Mignon Eberhart's illuminating biographer, Rick Cypert, explains that Mignon and her husband Alanson, an engineer, while in Europe over the winter season of 1931-32 stayed at a small hotel north of Nice in the Alps Maritimes, which thereupon became the setting for the author's sixth mystery novel.  As an 85 year-old Eberhart related decades later in 1984, in an interview published in the Mystery Writers of America newsletter:

We were staying at a little hotel-pension place.  It was a very poor season on the Riviera in that part of Nice, so they gave me, for nothing, a little extra room to write in.  It was cold and had no view, but a writer shouldn't have a view.

It was, then, this room without a view that produced The White Cockatoo. 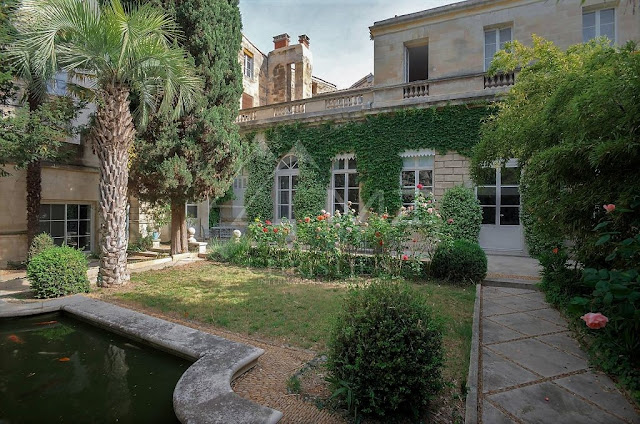 Aside from the European setting in The White Cockatoo, what is unusual, indeed unique, in Eberhart's work is the fact that the narration is provided by a man, an American engineer (like Eberhart's husband), Jim Sundean, who has just finished a job in the USSR and is passing through Avignon on his way to meet a friend in Spain.  (If you think this makes Jim sound like some sort of Soviet operative, remember this is a few years before the outbreak of the Spanish Civil War and that Mignon was a steadfast Republican, American style, and a staunch anti-Communist--no hero of hers was ever going to be a Commie symp!)

The White Cockatoo has been dubbed, like another novel by Mary Roberts Rinehart, The Red Lamp (1925), a rare example of "Male HIBK."  Peppery Sarah Keate pugnaciously narrated the first five Eberhart novels, but after The White Cockatoo Eberhart's use of first-person narration lapsed.  Considering the ninnies that some of her later ingenue characters can be at times, this may be just as well.

In fact The White Cockatoo is one of the few HIBK novels, as far as I know, that actually employs the notorious term "had I but known"--or, to be precise, "had we but known."

I had, of course, no premonition that he was to become such an active and important figure in the really hideous affair which, had we but known it, had only begun.

Dorothy L. Sayers, having rather tired of the predominance in mystery fiction of the cerebral pure puzzle detective novel (or so she said), gave an enthusiastic newspaper review to The White Cockatoo, particularly praising the novel's spooky atmospherics.

The White Cockatoo certainly has all that, and then some.  Perhaps a touch too much, for my taste.  At over 100,000 words the novel is a little long for a suspense tale in my view, but then readers of this blog will know of my partiality for the glittering brevity, the admirable economy, of mid-century domestic suspense.

Yet Eberhart does a highly creditable job of portraying the old Avignon hotel, a formerly opulent family mansion run quite decidedly to seed, in the dead (quite literally!) season, as Sayers notes in her review: 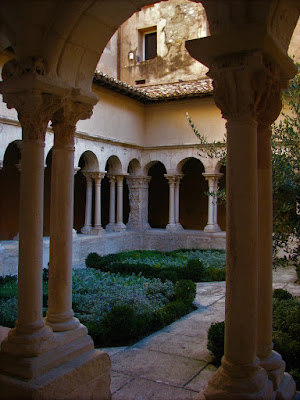 Its action all takes place in a French country-town hotel, in the dead waste and middle of winter.  Its opening chapters, with their picture of the windy courtyard, chequered with bleak light and wavering shadows, the dim old-fashioned corridors, musty rooms filled with furniture of inappropriate splendour, the cramped little slow-moving lift, the melancholy lounge dotted with wicker chairs and desiccated palms, the whole barren dinginess of the abominable place, through which the few visitors and the skeleton staff flit like lone survivors from a catastrophe--these chapters. convey more real eeriness and discomfort than you could get from gallons of blood, dozens of sheeted spectres, or scores of conspiratorial gangs in Chinese opium dens.

Reading this description of the book over a decade ago, when I was laboriously printing out and cutting and pasting Sayers book reviews from the Sunday Times into alphabetized legal pads, I was sold on The White Cockatoo immediately.

Influential mystery critic and "crime novel" proponent Julian Symons emphatically never took the feminine fright novels of the between-the-wars years seriously (nor did his opposite number, critically, puzzle purist Jacques Barzun), but in fact Eberhart's books constituted, as Sayers astutely observed, something of a blow struck for realism in the era of the deliriously over-the-top hair-raisers of Edgar Wallace, Sapper, Sax Rohmer and their many British and American imitators.  Indeed, Eberhart's books are, I would argue, more realistic than many of the Grand Guignol serial killer thrillers of today.

To be sure, I agree with Sayers that Cockatoo's "denouement is a trifle confused and tumultuous."  Eberhart tends to get a bit tangled up in explanation (she's not really "America's Agatha Christie," except in an economic sense), showing that she is still transitioning out of the very deliberate clues-and-confidences tradition of the ratiocinative detective novel.

Beginning in 1936 Eberhart would streamline her suspense novels, making them more resemble the sleek and sophisticated domestic suspense fiction of the fifties and sixties, though the romance element is more predominant--too much so, indeed, for this curmudgeon--in Eberhart's books.

But for the patient reader The White Cockatoo is a fine example of the between-the-wars feminine suspense novel, male narrator notwithstanding.  From the very moment on November 29, 1931 that Jim Sundean checks into the eerie Avignon hotel, the reader is awash in a superbly shuddery atmosphere of oppressive anxiety and angst.  Heck, if this were Cornell Woolrich, and everyone was left dead or spiritually destroyed at the end of the story, we could even call it noir. 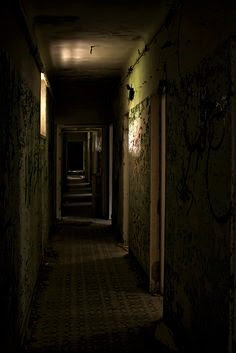 There are only three other guests at this dead-alive establishment: a much-bewrapped Nebraska matron by the name of Mrs. Felicia Byng; a Russian-bearded clergyman called Pere Robart; and a beautiful, red-slippered slip of a young American, Sue Tally.  Additionally there is a servant trio composing a skeleton staff of porter, cook and maid and the owner couple, the Lovschiems, ingratiating Marcus and alluring Grethe.  And let us not forget the cockatoo Pucci, who, if not a literal lounge lizard, is a forward fellow who unabashedly makes free with the guests.  There are as well, after the murdering starts, assorted French policemen, all of them of various dim shades, and, altogether more importantly, an American detective by the name of Lorn.

Eberhart seems to have been conscious that, with his jeweled rings and oiled manners, Marcus Lovschiem, originally of Chicago, USA, might arouse suspicions of anti-Semitism.  On page 2 Jim speculates to himself concerning Lovschiem's possible national heritages:

I was at a loss to guess his nationality; there was a touch of the German about him and, faintly, of the Italian; his gestures were French, and there was something vaguely Hebraic about his full red mouth and his dark eyes, which were set just a hair's breadth too close together above the coarsely aquiline bridge of his nose.  It was therefore something of a shock when he met my eyes again, beamed broadly, rubbed his fat hands together and said: "I too am an American."

Something enticing from the great melting pot that in American mythology we claim to venerate, or a deceiving Janissary from the crafty forces of rootless cosmopolitanism?

Personally I was interested to see just where the Lovscheims would end up in this intricate maze of murder and mystery.  There are surprises, though I can't of course say just what surprised me.

If you think that Jim may fall hard not for the bold and been-around-the-boulevard Grethe but for sweet and virginal Sue--true-blue and all-American too--you may well be right; it's not for the likes of myself to deny the inevitable and inerrant path of Cupid's arrows in between-the-wars classic mystery.  However, you may well be surprised by just how Pucci, something of a rootless cosmopolitan himself, triumphantly justifies his place as the novel's title character.

Bravissimo, Pucci!  I would have liked to see more of that memorable bird in future books.
Posted by The Passing Tramp at 12:40 AM