Bush Fire! The Flames of Vintage Detection Burn Bright in 2018

First, I am posting a link to a piece I wrote for The Rap Sheet on the essays in the Edgar-nominated essay collection Murder in the Closet (2017).  I believe this is the most detailed piece on the book, its contents and its intent, that you will find on the internet.

Getting an Edgar nomination was happy though, I must admit, unexpected news.  Masters of the "Humdrum Mystery (2012) and Mysteries Unlocked: Essays in Honor of Douglas G. Greene (2014) had been passed over in 2013 and 2015 respectively and Clues and Corpses: The Detective Fiction and Mystery Criticism of Todd Downing (2013) and The Spectrum of English Murder: The Detective Fiction of Henry Lancelot Aubrey-Fletcher and GDH and Margaret Cole (2015) had not even been considered because they were published by a micropress.  But unexpected news can signal most excellent tidings, sometimes.

Looking ahead to that which I, and perhaps you my blog readers, expected in 2018, I note that I continue to write introductions for Dean Street Press and Coachwhip Publications, plus I have an introduction to an upcoming Detective Club Crime Classic title to be published by the Collins Crime Club, which has really gotten behind vintage mystery reissues of late. 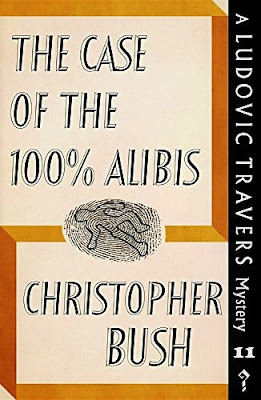 Ten more Christopher Bush mystery titles come out next month (and are available for order now), all of them with new introductions by me.  These titles are, respectively, The Case of

The 100% Alibis, The Dead Shepherd, The Chinese Gong, The Monday Murders, The Bonfire Body, The Missing Minutes, The Hanging Rope, The Tudor Queen, The Leaning Man and The Green Felt Hat.

I linked to some blog reviews of these titles, but also see the pages on Bush at the aptly-named blog of my old net friend Nick Fuller, The Grandest Game in the World.  (Be advised we don't always see eye-to-eye on every title.)

As with detective fiction in what we might term The Case of ER Punshon, I think titles 11-20 in the Bush canon represent arguably the peak of Bush's superb achievement as a mystery writer.

There are some exceptionally ingenious books here, but you can see more of what I have to say about the books (and their author) in the introductions--though I might post a review here of one or two of my personal favorites in the series.

Finally, there is much more coming this year under the auspices Coachwhip and also, I am hoping, there will be some additional authors with Dean Street Press.  More on this in the coming weeks.  Please stay tuned!
Posted by The Passing Tramp at 9:27 PM