A month back I posted about the detective novel Wings of Mystery, published in England in 1929 by Collins and authored by one "William Gavine."  I have been able to find out nothing about this "William Gavine," but I have been able to discover a fair bit of information about Sir William Gavin, whom I suspect may have been "William Gavine."  What easier way to create a pseudonym than simply to add a letter to the end of your surname?  It wouldn't really work for me (Curtis Evanse, get real), but that simple "e" may have provided effective concealment for Sir William Gavin, who may very likely have been the only chairman of the Jamaica Banana Commission ever to publish a detective novel. (Do you know another?)

Sir William Gavin (1886-1968) was an agricultural expert who served in various positions for the British government and in business.  He maintained a farm of 50000 acres until WW1, when he joined the Royal Naval Volunteer Reserves.  In 1917 he earned his first government position with the Ministry of Agriculture.

Over ten years later he became a consultant with the Imperial Chemical Industries Company.  They wished to understand the perspective of the farmer, and his many years experience before and after WW1 cultivating his farm was essential in his duties.  At the onset of WWII Gavin was named the Chief Agricultural Adviser to the Ministry of Agriculture.

His obituary in the Sunday Times is more detailed:

Sir William Gavin, CBE, for many years a well-known figure in British agriculture especially through his work as Chief Agricultural Adviser to the Minister of Agriculture from 1939 to 1947, died yesterday at the age of 82.  Born in 1886, Gavin was educated at Uppingham and Trinity College, Cambridge, where he took a degree in Natural Sciences and a diploma in Agriculture.  He represented Cambridge at athletics and cross-country running in 1910.  when he left Cambridge, Gavin went to Lord Rayleigh's Dairy Farms and Strutt and Parker Farms in Essex, and he continued to be associated with these two enterprises, becoming a director of Strutt and Parker Farms in 1926.  When the Duke of Marlborough decided to develop his estates on similar lines, the Hon. Edward Strutt recommended Gavin who went to Blenheim and was farming some 5000 acres there when the First World War broke out.

He was commissioned in the RNVR [Royal Naval Volunteer Reserves] and served in small ships till 1917 when, at the request of Mr. Strutt, then Agricultural Adviser to Lord Ernle, Minister of Agriculture, he was seconded for special duties at the Ministry of Agriculture.  He was successively secretary and deputy director of the Army cattle committee, director of flax production and director of land reclamation.

At the end of the war he returned to farming but in 1928, when Imperial Chemical Industries began to concern itself with agriculture, he was invited to join the company to bring the benefit of his understanding of the outlook and attitude of the farmer.  Constantly in touch with official circles, he was in 1936 appointed chairman of the Jamaica Banana Commission.

On the outbreak of the Second World War he moved his desk to Whitehall, becoming Chief Agricultural Adviser to the Ministry of Agriculture and Chief Liaison Officer to the Minister himself, having gathered around him a first-class team of liaison officers responsible personally to the Minister for the conduct of the food production campaign in the counties.  He was always accessible to anyone who wanted to see him and his understanding of agricultural susceptibilities smoothed over many awkward passages, particularly when Lord Hudson was applying his forceful drive to the ploughing up campaign in the counties.When Gavin felt that he should leave the Ministry in 1947 he reassumed his responsibilities on the agricultural side of ICI and became chairman of the Scottish Agricultural Industries.  He was a member of the Royal  Commission on Scottish Affairs (1952-1954) and to this work he brought as always practical understanding as well as sound philosophy. 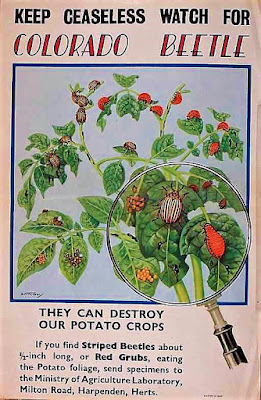 Until the advent of this blog piece, there was only one webpage devoted to Sir William Gavin: "Sir William Gavin: Killer of the Countryside," at Dominic Berry's A Glonk's HPS Blog.  That's where I found Sir William's Sunday Times obit and photo, originally from the NPG.  Berry admits his title is deliberately provocative, designed to attract clicks, but Sir William, whom Berry calls "one of the most crucial and central figures" in the expanding British agricultural production during the Second World War, in truth is deeply unpopular among rural preservation activists, for his role in the development of British agrochemical farming.  It is often suggested that Sir William was corrupt, because of his promotion of pesticides while he was linked with the chemical industry.

However, what makes Sir William a villain in some people's eyes also makes him a likely candidate, in my eyes, as the author of Wings of Mystery--and, after all detective fiction is what concerns us here.

Whomever "William Gavine" was, he was someone who knew about both insects (moths and butterflies) and chemicals and who had pronounced views about the First World War.  (No "sentimentalist," he believed the war was worth fighting and that pacifists were, well, let me put this bluntly, wankers.)

Later in life, after he had finished nobly expanding food production or ruthlessly despoiling the countryside as you see it, Sir William became Vice President of the Bee Research Association and was eulogized as a great man in the British Bee Journal; and as early as 1923 he authored Bees for Beginners.  Verily, this man knew his bugs, and, like many a successful man (and woman) in his day, he may have been bitten by the mystery bug.

In 1911 Sir William Gavin, than merely William Gavin, was boarding, a single man, at the Rayleigh Arms in the Essex village of Terling, an ancient Saxon habitation which goes back to the Domesday Book.  Perhaps Gavin loved the English country too, though he obviously had differing views on economic development from environmentalists. Had he gone on to write a second detective novel (assuming he wrote the first one), perhaps he would have made it that rare thing in British mystery: a pro-developers story!

I do hope Collins will reprint Wing of Mystery, a good tale that merits it, and that we get to the bottom of the mystery of its authorship.
Posted by The Passing Tramp at 9:44 PM