Ray and Jimmy: The Raymond Chandler-James M. Fox Correspondence Part 3, "I must report immense relief at Marlowe finally being allowed to sleep with one of his women...."

Some time ago when I left off with the second installment of the saga of Ray and Jimmy--found in the six-year correspondence between Raymond Chandler and much lesser-known crime writer James M. Fox (native Dutchman Johannes Knipscheer)--we were in the middle of the saga, February 5, 1954, with Chandler telling Fox to "cut out the 'mister,' please," when Fox addresses him.  (The two men were two decades apart in age, Chandler 65 and Fox 45.)  Soon they were addressing each other as Ray and Jimmy rather than Chandler and Fox.

In the same letter Chandler tells Fox that his, Fox's, police novel Code Three--a departure for the younger author, who was best known for his medium-boiled Johnny and Suzy Marshall mystery series (see here for my less than enthusiastic review of one installment of the series, The Gentle Hangman)--"as a piece of story construction...probably is much better than Dark Crusade," Fox's recent espionage novel.  "But it is not in the same class of writing...."

Apropos to this declaration concerning the merits of story construction and pure writing, Chandler reiterates views from his essay "The Simple Art of Murder," when discussing the British publisher Hamish Hamilton.  "I think he has flopped on the American books he has published more often than not," Chandler averred of Hamish Hamilton, continuing:

He has always published John Dickson Carr whom I find as unreadable as Mickey Spillane. although for different readers. [Carr and Chandler feuded around four years earlier when Carr, having taken umbrage at Chandler's withering attack on classic English mystery in his essay, had panned Chandler's Simple Art of Murder collection in a review].

I can't read Agatha Christie either....Most mysteries--I'd say 90%--are written by people who can't write.  I take it they write mysteries because there are enough people in the world who will read almost anything in this field....There's always a market for a clever hack and I must say that the nicest writers I have known personally are the hacks.  The others are egotists and boring.

Which reminds me I am now the same.

This is what I love about Chandler: he can but utterly, defiantly obtuse on the matter of the merits and appeal of riddlers like Carr and Christie, but then he can deflate himself in a burst of self awareness.

The Long Goodbye is, as you're probably quite well aware yourself, the best book you have written....Of course the Philip Marlowe novels have always been in a class by themselves.  The most elementary proof of this, I think, lies in the fact that they can all be read again and again with undiminishing returns to the reader....The Marlowe novels should probably never have been classified as "mysteries" at all.  They are novels of character, and novels of low manners, written "down" somewhat, I imagine, so as not to offend the so-called sensibilities of a certain chosen market.  The mystery part of the plots is always ingenious, and never really important.  In The Long Goodbye...the outcome is almost transparent from Chapter 13 on.  But the fortunate reader is treated to such a banquet of style, characterization, acerbic wit and plain good literature, not to mention frequent dishes of almost painfully keen philosophy, that he leaves the table with a feeling of exhilaration.

I read The Long Goodbye in one day, and wound up rather depressed, because the book made it so terribly clear how wide the gap really is between your accomplishment and mine.  It will have the same effect on all of your colleagues who are not hopeless egotists....

On the lighter side, I must report immense relief at Marlowe finally being allowed to sleep with one of his women....

....Has it seriously occurred to you to write your autobiography?...[If not] I'd like a further try at persuading you to allow me to attempt a straight biography.... 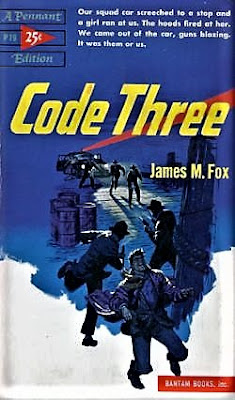 On the writing of Code Three, Fox diffidently explained explained that he had "been trying for years to talk Little, Brown into letting me shift away from my medium-boiled series characters, who don't fit the present audience trend towards sex and violence,.....They finally agreed, rather late in the day, to an experiment with a hardboiled police story.  I had to do it in six weeks or so to meet their schedule....Now they want more of them quick, because they made a good reprint deal on it, and it happens I don't feel much like obliging....

It was nice of you to read it.  The only defense I can make for it is the obvious one [money?], apart from whatever slight flavor of real cop talk I managed to get in....

In his response to Fox, typed on February 16, Chandler, after a long rant against the IRS, whom he declared he intended to "cheat" out of as much tax as he could "without getting sent up," threw cold water on Fox's life story proposal, declaring: "I don't know why I should write an autobiography....If I did it, it would be full of lies.  I don't think anyone else should do it, though, and I shouldn't care for the idea...."

Concerning Fox's statement that The Long Goodbye had a transparent solution to its mystery, Chandler reiterated his view that "no 'honest' mystery plot will fool the aficionado....I never bother about who bumped off Sir Montague Gore-Cavendish in the gun room with the doors and windows all locked.  Very often just for the fun of it I look at the end and then amuse myself with watching the author try to smudge his fingerprints....

On February 24, Chandler invited Fox and his wife to visit him and his wife in La Jolla, though he noted, "My wife is not in the best of health...."  Fox accepted and reported in March that he and his wife had "had a grand time" with the Chandlers.  Chandler mostly discussed his and his wife's problem with finding good cooks:

These [I've just discussed] have all been white.  I have heard a lot about wonderful colored cooks.  I haven't met one around here.  Most people here have them, and I know one woman, the wife of a judge, who pays a colored cool $100 a month for two days a week. 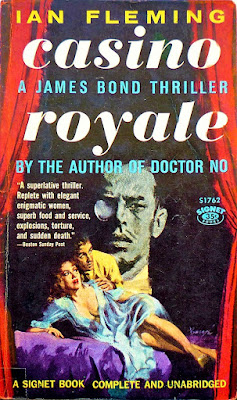 From home economics back to crime writing, Chandler reported in April, with his usual chariness toward a successful new author:

I have read a book called Casino Royale which was reviewed in Time along with my book and I liked it but thought it overrated.  Get it and take a look because it's along the lines of yours.  [Dark Crusade?]  Seemed to me to contain 4 or 5 errors.  (If you can't get it, I'll send you my copy to read.  Don't buy it.)

Fox agreed with Chandler's assessment of Ian Fleming's James Bond novel, the first in the hugely successful series, which Newsweek had praised as "awash with champagne and gore":

I've just read Casino Royale, which has two very interesting scenes: the baccarat game and the torture scene.  Most of the rest I sort of raised an eyebrow at.  There were several outright impossibilities, probably injected because the author, knowing better, figured he had to cater to the reader's demand for sensational incidents or something.  He's got literary talent, I should think, but the book's architecture makes no sense to me, and the girl is surely a very unsatisfactory and unbelievable character?

In the next and last installment of this series, more on Casino Royale, the complexion of cooks and the fellow crime writer whom Chandler simply referred to as "that creep."  Great upheaval was about to hit Chandler's enclosed world.  As in any good mystery, there's a wicked twist in the tale, one which may even surprise the Chandler aficionado.
Posted by The Passing Tramp at 12:48 PM