Tuesday Night Bloggers 2 Some Time for Sergeants: A Consideration of Beef and Cribb, Indubitably Great Detectives (with thanks to Leo Bruce and Peter Lovesey)

Sometimes accomplished mystery writers leave us wanting more, abandoning a popular series sleuth of whose exploits loyal fans were still wanting more accounts.  But these sleuths, even though the number of their recorded cases may be only in single digits, may most certainly figure as Great Detectives, like those keen coppers Sergeants Beef and Cribb, created by, respectively, Leo Bruce (Rupert Croft-Cooke, 1903-1979) and Peter Lovesey (1936), who next week in New York will be the recipient of a deserved Grand Master Award from the Mystery Writers of America.  I plan to meet him then, having only ever corresponded with him in the past.

One reason I like to read about these two clever "commoner" sleuths, Beef and Cribb, is that they are not from the posh snooty-toot school of Crime Queens Sayers, Allingham and Marsh. (I think I just originated that term, for better or worse!) Now I too like reading about the British glamour boys created by these ladies, but as I explained at length in my book Masters of the Humdrum Mystery, I do not believe that all of classic British mystery should be defined them, as it has tended happen for a long time in the hands of such analysts as PD James and Lucy Worsley.  (We are undergoing a reassessment of this subject, to which I think my work has contributed, though I imagine many more people will be rather more directly familiar with the work of Martin Edwards, who also has revised received wisdom.)

Raymond Chandler, premier advocate and practitioner of the hard-boiled crime novel in the Forties and Fifties, complained that the British aristocratic gentleman sleuth was impossibly unrealistic and that he "just won't do," but I doubt that Chandler, who did have some nice things to say about the fictional sleuths Inspector French and Dr. Thorndyke (a medical jurist), similarly would have disapproved of Sergeant Beef, had he read any of the Leo Bruce novels, or of Sergeant Cribb had he lived to read Peter Lovesey--though I don't know how much he would have appreciated the humor in the books. (Chandler died eleven years before Cribb's first recorded adventure appeared.)

Both Sergeant Beef and Sergeant Cribb ("sergeant" carries different connotations in the two books, for Cribb is higher-ranking than Beef) appeared in eight mysteries, Beef between 1936 and 1952 (16 years) and Cribb between 1970 and 1978 (8 years).  These are:

Both started off with bangs, Cribb in the brilliantly conceived Wobble to Death, about murder at a Victorian "Wobble" (all the Cribb mysteries are set in Victorian England): a marathon walking competition. (This sort of contest is known as pedestrianism).  I read Wobble over twenty years ago and was immediately delighted with the novelty of this setting, so cleverly carried out by Lovesey, an athlete himself, and the engrossing observations about Victorian England, especially its entrenched class system, which confronts Cribb all too frequently. 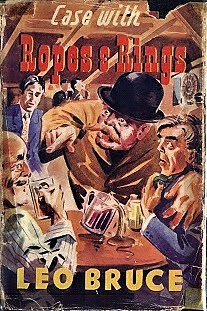 Beef's debut takes place in Case for Three Detectives, one of the great tours de force in classic crime fiction--still somewhat underappreciated today, I think.  The book succeeds on two levels: as a country house locked room mystery and, most notably, as a hilarious send-up of classic mystery conventions.  The conceit of the novel is that three Great Detectives appear on the scene to solve the crime: these are obviously Dorothy L. Sayers's Lord Peter Wimsey, Agatha Christie's Hercule Poirot and GK Chesterton's Father Brown.  Each offers a brilliant solution to the locked room murder, but each is wrong.  In the end it's the lowly local cop--darts-playing, beer-swilling, bowler-hatted Sergeant Beef--who solves the mystery!

After the next book in the series, Case with No Conclusion, Beef leaves the force and goes into private practice as a detective, with his cases chronicled by a priggish young gentleman by the name of Townshend, who vocally disapproves of Beef's myriad insufficiencies, as he imagines them, as a Great Detective.  Yet Beef gets it right every time, even the ironic Case with No Conclusion.  It's an amusing, subversive series that belongs in the pantheon, even if none of the later books quite live up to the first (though Case with No Conclusion and Case for Sergeant Beef run it pretty close.)

For me it was the Peter Lovesey's later Cribbs books that most fulfilled the promise of his first: A Case of Spirits, with its fascinating look at Victorian spiritualism; the utterly delightful Swing, Swing, Together, a murder fantasia wondrously spun from Jerome K. Jerome's Victorian smash seller Three Men in a Boat; and the surprisingly grim Waxwork, a ingenious meditation on that most fascinating phenomenon of Victorian crime history, the accused lady poisoner of good social standing. 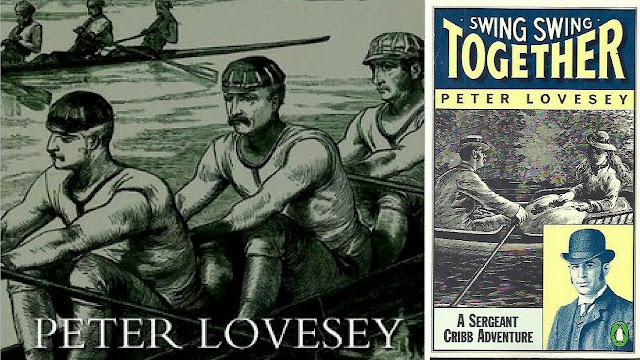 Why did Bruce and Lovesey abandon their series sleuths so early in their careers, Lovesey when he was 42 and Bruce when he was 49?  Lovesey I'm sure somewhere discusses this matter, but I think he might have felt the Victorian theme might be getting stale.  It's a field many another crime writer has explored since, but in the 1970s it was still quite original, I think.  (I believe John Dickson Carr, who reviewed the early Lovesey mysteries, was Lovesey's great predecessor in this regard.)

In the 1980s Lovesey produced several classic standalones, like The False Inspector Dew, Rough Cider and On the Edge and introduced another series detective, regrettably short-lived: Prince Albert Edward, or "Bertie," son of Queen Victoria (and later King Edward VII in his own right), who drolly solves three mysteries told in novel form.  Since 1991 Lovesey has devoted himself primarily to his more serious Peter Diamond series, now seventeen in number and still going strong.  The series includes Bloodhounds (1996), an homage to John Dickson Carr and locked room mysteries.

Leo Bruce's story is a sadder affair.  As I explain in "The Man Who Was Leo Bruce," what interrupted the Beef series was the arrest of Rupert Croft-Cooke for "homosexual offenses" in 1953, an absurd affair that unfortunately resulted in Croft-Cooke's serving a six-month prison term in an English jail.  When he was released from prison, RCC understandably left England for European emigre life in Tangier.  He did not return to England for nearly two decades, a few years before his death at the age of 76 in 1979.

In At Death's Door, the detective novel RCC published in 1955, a year after his release from prison, the detective is an amateur sleuth, a schoolmaster named Carolus Deene, and one of the murder victims is a policeman.  If you can't beat  the Crime Queens, join 'em, I suppose! (The Carolus Deene series lasted until 1974.)

It is easy to read RCC's resentment against British legal authority in this shift. Sergeant Beef never appeared again in a novel, though he did solve one last case in the short story "Beef for Christmas," which was published in a magazine in 1957 and recently reprinted in one of Martin Edwards's anthologies.  Unsatisfied with his the sales of the Carolus Deene mysteries, RCC in the late 1960s actually proposed to his publisher reviving Beef, but his publisher nixed the idea after reading Case for Three Detectives, arguing that Beef was just too old-fashioned for the modern mystery scene.  So we have the publisher to think for the fact that there were no more Beefy tales!

The publisher's lack of enthusiasm for Beef's prospects seems ironic to me, for in fact another mystery writer, Joyce Porter, at the time was making rather a success out of her Inspector Dover detective novel series.  Dover is a grosser, vastly more obnoxious version of Beef (Beef may have had a straggling ginger mustache, but Dover has showers of dandruff), and, in a fascinating reversal, it is his lowly sergeant, MacGregor, who is the posh one.  To me Dover is a Great Detective too, and I'll be writing about him next week, I hope, along with another non-gent sleuth, Anthony Gilbert's defense attorney Arthur Crook, whose short stories have been collected in a smashing new book by Crippen & Landru.  I also plan to post more specifically about a couple of Beef and Cribb books.  See you soon!
Posted by The Passing Tramp at 10:17 AM