When I started reading PD James and Ruth Rendell back in the 1990s British crime writer Margaret Yorke (1924-2012) was a name I sometimes used to see elevated with their own, into a sort of triumvirate.  Subsequently Yorke has much faded compared to Rendell and James, which may be a bit unfair.  Before the current book under review, I had only ever read one book by Yorke, No Medals for the Major (1974)--a minor classic of the suspense genre, I think, one which lays bare the cruelties that can lie beneath those lovely little English villages about which we vintage mystery fans love to read.  It's a brave, unflinching book about mass hysteria and groupthink that holds up a dark mirror to cozies like those by MC Beaton, where the worst that ever can be said about the villagers is that they can get rather silly at times (but they always have Hamish Macbeth to straighten out their minor foibles and follies). 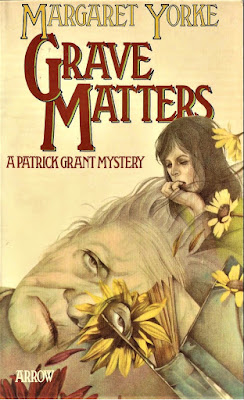 No Medals for the Major was the first of York's true mystery suspense novels, and it appeared in the middle of the author's short-lived Patrick Grant detective series, about the detective exploits of a handsome amateur sleuth, Oxford don Patrick Grant.  The Grant series, consisting of five books, ran between 1970 and 1976, when Yorke abandoned it.

When I was in Boston last month I bought at a used bookstore there a pb copy of the middle book in the series, Grave Matters, and unfortunately was far less impressed than I was with Major.  It's a short book of about 55,000 words or less and it took me about a month of off-and-on reading to finish it, so you can guess I wasn't  exactly entranced.

Yorke's Patrick Grant certainly comes right out of the classic mystery character closet of Crime Queens Dorothy L. Sayers, Margery Allingham and Ngaio Marsh, being a good-looking, charming, well-educated and eligible bachelor who likes to solve mysteries.  There's a younger woman romantic interest in the book, although Patrick's closest relationship, appealingly done (and not incestuous!), is with his married sister.  The problem for me with this book is that Grant simply isn't that good of a detective.

There are two human deaths in the novel for most of its length (and that of a dog), but since they are written off as accidents (both of them are old ladies who fell--or were pushed--down steps, one in Athens, Greece, one in the British Museum in London) the police don't come into the book for a long time.  Grant's desultory amateur detection mainly consists of sneaking into a house in the chraming village of Meldsmead on two separate occasions and stealing a blackberry pie and a photo album.  Most of the novel is devoted to his wooing of an attractive relation of the first murder victim, a retired headmistress of a girls school.

A lot of it reads like a suspense novel, as it looks like the object of Grant's romantic interest may be having an affair with a man who is trying to murder his wife, both of them recently having moved to Meldsmead.  The detection portion comes back near the end, in rather a huddle, when we have another murder, then two more attempted ones, and a fire and a fatal car crash!  The motivation for this murderous mayhem seems highly implausible, so we get characters suggesting that the murderer must have been mad, which feels rather a cop-out in a detective novel.

Another thing which bothered me was the title.  Why "Grave Matters"?  Yes the matters are grave, as in any murder story, but one expects something of a pun, like a burial plot or a cemetery having something to do with things, and nothing doing here!  It's a bland title for a bland mystery.  "Serious Business" would have worked just as well.

Yet Patrick Grant, along with his sister and brother-in-law, are appealing enough characters and I plan to read another in the series, to see whether the mystery and detection are better done.  Yorke seems quickly to have grown restive with the detective novel format, devoting herself in her writing between 1977 and 2001 entirely to suspense fiction, or crime novels (28 of them), for which she is far better known today--perhaps for good reason!
Posted by The Passing Tramp at 1:02 AM