When a beloved, highly prolific crime writer passes away while still sitting in their writing saddle, their publisher naturally seeks some way to keep money coming in with yet another new book if possible.  You can't always have an author like Agatha Christie, who kindly set aside a couple of mysteries for publication after her death.

Sometimes there will be the completion (by means of another hand) of an uncompleted novel.  Or there might be enough uncollected short stories out there for a book.  This was the case after the twin demises of the late, great modern Crime Queens PD James (1920-2014) and Ruth Rendell (1930-2015), who seemed like they would never die but then abruptly did, within a short span of time from each other.  (Rendell's stroke, which proved fatal a few months later, took place just six weeks after James passed away.)

I'll be reviewing PD James's two posthumous short story collections soon (about which I'll have lots to say, both about the stories themselves and about Faber & Faber's odd packaging of them), but here I want to talk about the posthumous Ruth Rendell collection, A Spot of Folly (subtitled Ten and a Quarter New Tales of Murder and Mayhem), which first appeared in the UK in 2017.  (Shorn of Sophie Hannah's introduction, it was published last year in the US by Open Road.)

Ruth Rendell was an awesomely prolific author both of novels and short fiction, the latter of which during her lifetime was collected into seven volumes containing 64 short stories and 5 novellas, published between 1976 and 2000.  That slightly surpasses even the number of Rendell's published novels and novellas, which I think stands at 67.  Although Rendell kept publishing a novel a year up until the year of her death, her short fiction production declined precipitously after 2000.(See my review of Rendell's Blood Lines here.) 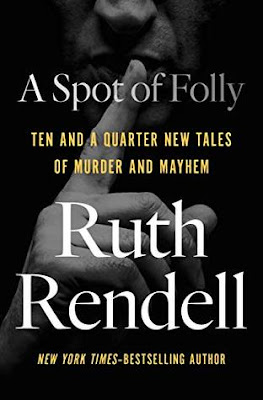 So what on earth could have been left uncollected at this point?  Happily that industrious forgotten (or sometimes merely misplaced) fiction bloodhound Tony Medawar discovered some attractive lost gems for A Spot of Folly, though the book is, to be sure, rather a ragbag collection, including not just crime stories but a couple of "weird" tales and one piece of apocalyptic fiction.

The "quarter" tale (really more like a tenth), Never Sleep in a Bed Facing a Mirror, is, as the title suggests, a weird story.  I can't lavish too much verbiage on a three-sentence, 51-word fragment, but it's nicely done and does make one want to heed the injunction of the title.

Of the ten remaining pieces seven are crime or crime-ish.  The longest piece (at sixty pages, a fourth of the volume) is The Thief, a novelette that was originally published in 2006.  It's a weak piece in my view and I can't help wishing that her much more interesting novella Heartstones, originally published separately in 1987, had been chosen for inclusion instead, or that The Thief had simply been left out of the collection.  It adds nothing to Rendell's legacy.

As for the remaining six crime pieces, half of them, regrettably, are poor, but the three others can safely be recommended.  The duds are The Price of Joy, Digby's Wives and A Drop Too Much.  Aside from the clever title, The Price of Joy--a whimsical homage, shall we say, to O Henry's The Ransom of Red Chief--has little to recommend it.  Digby's Wives simply fizzles and A Drop Too Much has one of those ludicrously labored murder-your-wife plots and a far too obvious twist.  One is tempted to conclude that these stories were deliberately left out of past Rendell short fiction collections. 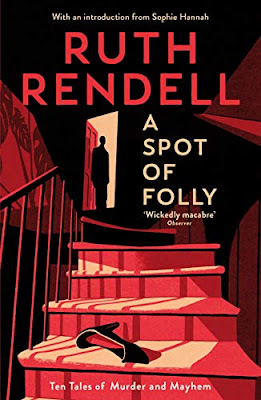 A Spot of Folly and The Irony of Hate (excellent titles both) are also 70s twist tales, but these actually come off, exploding with a nasty bang.  Most of Folly takes place in Paris, and it has some genuinely tense moments there.  Hate is the cleverest of the bunch, I think, the only one which totally flummoxed me with its twist. The may lack the depth of the best Rendell short fiction, but they are cleverly done.

In the Time of His Prosperity is an anomaly, being the only "Barbara Vine" short story which Rendell ever wrote.  It also was the last short story Rendell published, of which I am aware anyway.  Like other Vines it is retrospective and evocative, though I imagine you will see the twist coming well before the end, just as I did.  I was reminded of Roald Dahl.

This brings us to the remaining three pieces, all of them short stories.  The Haunting of Shawley Rectory is Rendell's homage to M. R. James and it offers a nice twist indeed on the supernatural genre.  Just what is the nature of the haunting?  The story bears a certain resemblance to the other supernatural tale in the collection, The Long Corridor of Time, the oldest story in the collection, having been published way back in 1974.  It's an atmospheric and eerie piece which reminded me of Evelyn Berckman's splendid Seventies crime novel The Victorian Album, published a year before Rendell's short story.  Was it an influence?  (Review here)

Last but not least is my favorite piece in the collection: Trebuchet, published in 1985, back during the Cold War when people were worrying about nuclear war between the US and USSR and the two countries' respective allies.  In the US the television film The Day After had made a big splash a couple of years earlier, and nuclear disarmament was actively pursued by many groups in both the US and Europe as American president Ronald Reagan in a calculated bid of brinkmanship ratcheted up pressure on successive Soviet leaders.

Anti-nuclear groups feature in Rendell's detective novel The Veiled One (1988), as well as PD James' Devices and Desires (1989).  People might be reminded in Trebuchet of Nevil Shute's 1957 novel On the Beach, but there are also other crime writers who, like Rendell, wrote apocalyptic novels, including Moray Dalton.  Rendell does a superb job with her effort, reminding me as well of Daphne du Maurier--and you know that can't be a bad thing.

So this eighth and final (?) Ruth Rendell short story collection is for me almost a fifty-fifty affair (I really only liked six and a quarter of the pieces), but then, a spot of folly is better than no folly at all, eh what?
Posted by The Passing Tramp at 3:23 AM