Tea and 'teckery: Speaker of Mandarin (1983), by Ruth Rendell

Nigel stood in the doorway and looked at him [Inspector Alleyn].

"Are you lost in the pangs of composition, Bathgate?" asked Alleyn suddenly.

I'll leave young journalist Nigel Bathgate, ostensibly heterosexual, to moon a bit more, if he must, over faunish "Handsome Alleyn," but as an aside I wonder whether "all the right things for 'teckery," as Bathgate puts it, needs must include a dark, thin and long corporeal form and deep-set eyes?

Notice, for example, how American paperback publishers in the 1970s visually portrayed Ruth Rendell's Chief Inspector Wexford, surely one of the most accomplished of fictional detectives, with no fewer than 31 solved criminal cases to his credit in long and short form over half a century.

52 years old at the time of his first recorded case, From Doon with Death (1964), and in physical appearance not exactly a poem, Wexford as visualized below resembles film comedian Oliver Hardy rather more than Handsome Alleyn.  (As Oliver Hardy might say, "Hmph!")

However, Wexford, unprepossessing appearance aside, is a smart fellah indeed, quite a bit smarter than his fit and fashionable underling of many years standing, Inspector Mike Burden.

About a third of the novel is devoted to Wexford's China tour, which he very much enjoys, with a few things excepted, like the summer heat (consuming copious amounts of tea helps with that), the officious Communist Party tour guide Mr. Sung and the fact that the hotels routinely play "White Christmas" for the enjoyment of their Anglo guests.

Then there are the recurring appearances of a haunting, elderly Chinese woman with bound feet, who seems to be following Wexford around the country!  What is the explanation of this strange manifestation?

This latter element in the novel is Ruth Rendell's tribute to classic British supernatural fiction; and as a fan, like Rendell, of such stories, I was intrigued to encounter it.  Rendell in fact wrote the introduction to the first collection of M. R. James short horror tales I ever read, and references to James and other British terror masters like Sheridan Le Fanu are found throughout her own writing.

But there's a plain old murder, or at least a odd death, which takes place as well, when a Chinese man  falls to his death into the river from the boat on which Wexford and a party of Anglo tourists is traveling.  (There is travel by boat, plane and train in this novel, making it reminiscent, in this section, of certain classic Thirties mysteries by Agatha Christie.)  "Not one of us," indifferently pronounces a British woman snapping pictures on the boat, when Wexford asks who has gone overboard.  "A Chinese."

A few months after Wexford returns to England, this same woman, Adela Knighton, is found shot to death at Thatto Hill Farm, her country home near Kingsmarkham, Sussex, where Wexford is Chief Inspector.

A leading suspect in her murder is, as is so often sadly the case, the dead woman's husband, wealthy retired attorney Adam Knighton, whom Wexford noticed behaving oddly during the China tour.

Yet Knighton, past sixty and to all appearances contentedly married with four children, doesn't really seem like a murderously-inclined individual, nor does he seem to have had, even where he such, any compelling motive to murder his wife.  Could there be a connection to someone else in the tourist party, the members of which soon start to seem in retrospect to have been rather a shifty bunch?

This is an enjoyable Wexford detective novel, written at a time when Rendell was at her dexterous plotting prime, and there's a nice twist of the dragon's tail very near the end.  The first few pages can be oddly off putting to modern readers, however, as Rendell saddles us with tour guide Mr. Sung, whom Wexford, it is quite evident, doesn't like at all.

"He would have given a good deal to have been rid of baby-faced, pink-cheeked, slant-eyed Mr. Sung," writes Rendell of Wexford on the second page; and in the next page or two she saddles Sung with opportunities to use "l's" in place of "r's": e.g., "light" for "right," "velly well" for "very well" and even "I aflaid you be solly" for--well, you get the idea.

I suppose this r/l bit is for comedic effect at the expense of a minor Communist Party flunkie, but it seems dated for 1983, let alone 2019 of course.  Predictably in modern reader reviews the book has received criticism for "outdated stereotypes" and "racist depictions.  It's just a scant few pages where this occurs, right at the beginning, and it could easily be edited by modern publishers; but in truth all of the Chinese characters in the story are window dressing.

However, what compelled me to take a recent second look at Speaker of Mandarin, Rendell's "Far East" mystery (I first read it 23 years ago) was my discovery that Ruth Rendell herself had distant Asian relatives. In my previous post I discussed at some length her Grasemann ancestors, without going into her Asian connections.

The gr-gr-gr grandfather of Ruth Rendell (aka Ruth Barbara Grasemann) was Christian Frederick Grasemann, who migrated from Frankfurt am Main, Germany to London, where he married a young woman from Lavenham, Suffolk in 1810.  Christian's youngest son John Charles was Rendell's gr-gr grandfather, but John Charles had a rather more successful elder brother, George, who migrated to Moulmein (Mawlamyine), Burma, where he was First Superintendent of the Bombay and Burma Trading Corporation.

Before his death from smallpox during a business trip to Calcutta, India in 1879, George Grasemann had five children by his native Burmese wife, Mah Tsee.  Two of his and Mah Tsee's daughters, Kitty and Lizzie, first cousins of Ruth Rendell's great-grandfather Frederick Charles Grasemann, died in Moulmein when Rendell was a young girl.

Lizzie Grasemann of 103 Upper Main Road, Moulmein passed away in the city in 1942, not long after the Japanese occupation of the city.  Her will was not probated in the UK until 1956.  Kitty is pictured above.

Did Ruth Rendell know anything of her Burmese Grasemann relations?  I have no idea, though it is interesting that she herself toured the Far East and wrote a detective novel with a far eastern setting which was based on her experiences.

Burma is mentioned but once in Rendell's novel, when a character recalls that in 1941 Adam Knighton, the murder victim's husband, "had to go off with his regiment to the Far East somewhere, Burma I think it was...." 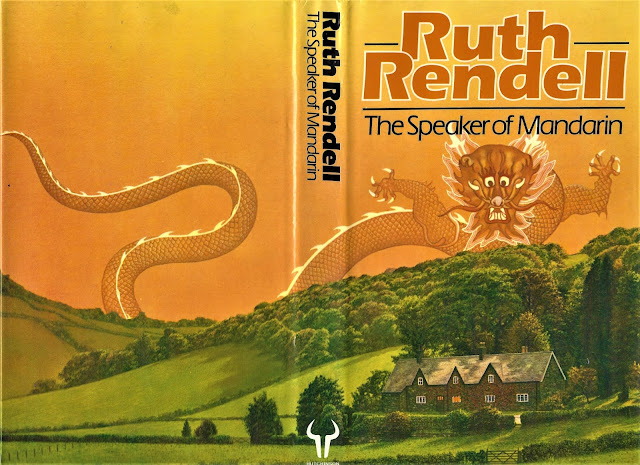 Posted by The Passing Tramp at 8:14 PM