My copy of Moray Dalton's The Belgrave Manor Crime--it's the fifth Inspector Hugh Collier novel, first published in 1935 and will be reprinted next year by Dean Street Press--has a stamp from Blackdown High School, located on Park Road in Leamington Spa, a lovely small city in Warwickshire, which isn't, I imagine, too dissimilar from the author's favored settings in southern England.  Belgrave Manor, the sinister locus of the novel, is located near Lewes in East Sussex, the area where Dalton spent most of her life. 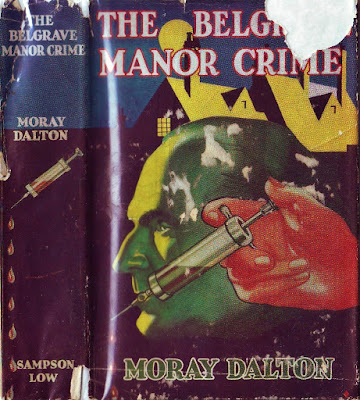 Belgrave opens with a new character in the Dalton crime novel corpus  (at least I hadn't encountered him before): psychic investigator Cosmo Thor.  (You know he has to be a psychic investigator with a name like Cosmo Thor.)  He's not actually a new character, however.  Cosmo Thor originally appeared in a series of six short stories published between July and December 1927 in Premier Magazine, under the title "The Strange Cases of Cosmo Thor," wherein Thor features as "a detective with remarkable empathy and insight," according to the Encyclopedia of Science Fiction.

In Belgrave, Thor is described by the author as "an authority on what had hitherto been a kind of No Man's Land between that covered by the C.I.D. and the alienist."  When the story opens he encounters, while returning to London by train from a case in the Midlands, a young palmist he knows, a certain Madame Luna, who has been released from jail after three weeks for practicing her mystical art.  (A police "trap," she explains, led her into saying more than she should have.) 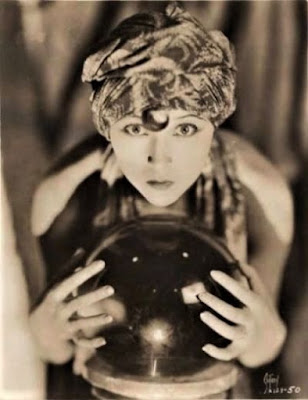 The palmist tells Thor that she is on her way to get back to her little girl, Allie, who was left in the care of her landlady while she was incarcerated.  After parting ways with Madame Luna and arriving in London, Thor resolves to take a restful weekend in the country.  On returning home, he learns from his not overly bright landlady that Madame Luna had desperately wanted to see him over the weekend, but was turned away.  Concerned, Thor consults his policeman friend, Hugh Collier, and learns from him that Madame Luna may be the woman who was found dead from a fall from a cliff in Devon.  But what in the world was Madame Luna doing in Devon, if the dead woman indeed was she?

Thor's investigation leads him to Belgrave Manor, a Sussex country house of ill-favored reputation to the inhabitants of the nearby village of Mitre Gap.  After long abandonment, Thor learns from local father-and-son house agents John and Dennis Garland, Belgrave Manor was purchased by wealthy London philanthropist Mrs. Maulfrey.  To Belgrave Manor Mrs. Maulfrey, who soon took custody of Madame Luna's daughter Allie while her mother was incarcerated, sent the young girl, in care of a pretty young governess, a Miss Celia Kent.  (Does that name remind you of anyone?) 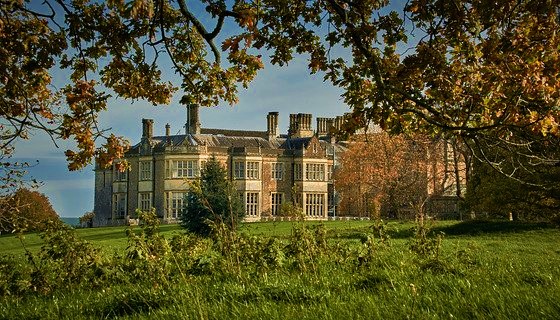 After a tense visit to Belgrave Manor, Thor is sidelined from the case (perhaps permanently), but fortunately the intrepid Hugh Collier is on hand to pick up the threads in what turns out to be a remarkably sinister case, one in which Hugh himself will be put in grave peril of his life.  If you don't like Hugh Collier by now, you certainly should after reading this story.  He's a good bloke.

Admittedly, The Belgrave Manor Crime is more of a thriller than a detective novel, although there is detection (as well as a nasty series of murders).  However, I found it a terrifically enjoyable one, richer than most of the plethora of Edgar Wallace and sub-Wallace thrillers that were published in this period.  I was rather reminded of Margery Allingham's "Maxwell March" mysteries.  The story actually gets rather dark (especially for the period), and, as with other Daltons, it was easy for me to imagine its being filmed by modern film makers who like "darkness" in their mysteries.  It's an impressive tale of outre mystery and lurid crime, with a cast of compelling characters, both good and bad.

And, be warned my dear readers, when those bad characters are bad, they are horrid!

One additional warning: You really should read The Belfry Murder (1933), which will also be reprinted next year by Dean Street Press, before perusing The Belgrave Manor Crime, because there is some important continuity between the two novels.  A review of The Belfry Murder is coming soon!
Posted by The Passing Tramp at 10:57 PM