Sherlock Holmes by way of Sauk City, Wisconsin: The Return of Solar Pons (1958), by August Derleth

In January 1959 madly prolific Wisconsin author August Deleth (1909-1971), the so-called sage of Sauk City, wrote in a column in the Madison Capital Times about a recent query he had had from a reader that had obviously hit home.  Late in the previous year he had published The Return of Solar Pons, his latest volume of adventures about Solars Pons, a detective who had started off as a Sherlock Holmes pastiche but taken on a life and (admittedly much narrower) following of his own; and the Derleth reader in question had written Derleth questioning why the author spent so much time on these stories, when he was "certainly capable of better things." Derleth, you see, also wrote mainstream literature, including novels in his Sac Prairie Saga.

Thus the age old criticism of a mystery writers!  Why do you waste your talents on such dreck, when you are capable of better things?  As per Edmund Wilson, why do you worry about trifling matters like who killed Roger Ackroyd, when you could be penning the Great American Novel?  Here was the answer Derleth provided to his questioner:

I write these entertainments--they are no more--because writing them is a relaxation, and because there is a small market for them, and I need the income they afford me.

It seems difficult for people to understand that even well-known and widely-published freelance writers cannot live by income from work of literary worth alone; I have said many times, in regard to my own work, that no writer would ever have written over 100 books (of which this book is the 84th to see print) if he had not been impelled to do so by economic necessity.

The fact is that the Solar Pons collections sell modestly well, all things considered.  Each of them will outsell one of my best books, which had superlative reviews, a Book of the Month Club recommendation...etc., and in ten years since its publication has sold just over 600 copies--which is not unusual for a work of literary merit.

The seasoned Baker Street Irregular, will find in this collection at least three tales which remain untold though mention in the canon--"The Adventure of the Remarkable Worm," "The Trained Cormorant," "The Grice-Patterson Curse"--though the others of the thirteen stories in the book are not related to the Doyle accounts....Readers who have liked the Sherlock Holmes studies in detection will like these stories, but devotees of the hard-boiled fast action school should avoid The Return of Solar Pons.

When The Return of Solar Pons was published in 1958 by Mycroft and Moran, an imprint of Derleth's own Arkham House (which published weird tales, including much work by Derleth's late pen friend and mentor of sorts, horror writer H. P. Lovecraft), it was in an edition of 2079 copies, which presumably all sold.  Compared with the unnamed "work of literary merit" which sold 600 copies over a decade (just sixty copies a year on average), one surely need not question Derleth's reasoning as to why he wrote Solar Pons short stories.  (Additionally the Solar Pons stores in Return had been published previously in periodicals, mostly in The Saint Detective Magazine.)  Ironically, it is for his work in genre literature--crime and horror fiction--that Derleth is probably best known today, at least outside the precincts of "Sauk City" (i.e., the twin towns of Sauk City and Prarie du Sac, Wisconsin).

While Derleth wrote eleven adult crime novels (and a goodly number of children's mysteries), he is best known to mystery readers for the Solar Pons saga, which ran, in Derleth's hands, to six volumes collecting, I believe, sixty-six tales, with four more rediscovered in the 1990s, for a total of seventy.  (One of you Solar Pons experts correct me if I'm off here.)

In 1968, Derleth recalled that, forty years earlier, during his junior year at the University of Wisconsin, he received a reply from Sir Arthur Conan Doyle to a letter he had written the distinguished and beloved author, querying whether he intended to write any more Sherlock Holmes tales.  The reply was a "terse message scrawled across my own letter"; and the answer was "that he did not."  At age nineteen Derleth--who like John Dickson Carr was something of a writing prodigy--thereupon boldly decided that he would write his own versions, about a brilliant British consulting detective named Solar Pons (literally "bridge of light," which Derleth wrote, "seemed to the adolescent mind singularly brilliant, which, of course, it was not.")  Derleth had never been to England (though he was a pronounced Anglophile), but youth will find a way where age dawdles.

Derleth had recently read John Rhode's Dr. Priestley detective novel The Murders at Praed Street (1928), and, influenced by such, he decided to make the headquarters of Solar Pons and his loyal friend, Dr. Lyndon Parker, 7B Praed Street (now the site of a sleek modern apartment building).  Several Solar Pons tales were published in The Dragnet magazine, as well as Detective Trails and Gangster Stories, and Derleth used his new pulped wealth to buy more books, including mysteries by, yes, Doyle, as well as those by Sax Rohmer, J. S. Fletcher,. H. C. Bailey and Ernest Bramah. (R. Austin Freeman was another youthful favorite of his.)

Derleth received a BA at UW in 1930 and soon set upon a career of writing fiction.  Four years later he published the first in a detective novel series set in his native town (slightly fictionalized as Sac Prairie), which has never been reprinted (though this may be remedied soon); and he began writing mainstream fiction as well.  He hoped to publish a Solar Pons book at this time, but this happy event did not come about until 1945, with The Adventures of Solar Pons.  Its publication resulted from encouragement given by Frederic Dannay and Vincent Starrett after a Solar Pons tale was included in the Ellery Queen edited anthology The Misadventures of Sherlock Holmes (1944). 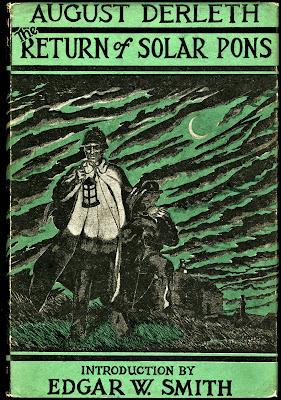 There are thirteen stories in The Return of Solar Pons.  Readers inevitably will have their own favorites, but, as Derleth said, as a group they should appeal to fans of the Master.  There are some nice touches for fans of Golden Age mystery fiction too.

It should be recalled here that Doyle's last cycle of Sherlock Holmes stories were published between 1921 and 1927, meaning they appeared during the Golden Age, alongside works by Agatha Christie, Dorothy L. Sayers, Freeman Crofts, S. S. Van Dine and other stalwarts of the period.  All of the Pons tales are set during the Golden Age, in the 1920s and 1930s, when Delerth was an adolescent and young man.

The two tales which Derleth mentioned as being "quite good"--"The Lost Dutchman" and "The Rydberg Numbers"--are clearly inspired by Holmes adventures, respectively "The Red Headed League" and "The Bruce-Partington Plans."  Derleth cutely puts American spins on both.

As Derleth wrote, "The Stone of Scone" is "thin" but the theme of Scottish nationalism couldn't be more timely, as Scotland contemplates another independence referendum.  (Best of luck, my friends, I say as a descendant of good and true Welshmen.)  Indeed, though modern readers (outside Scotland) may not realize this, it's actually a true crime story.

I thought "The Remarkable Worm," one of the adventures referenced in Doyle, was reminiscent of Doyle's "The Dancing Men."  Another Doyle referenced tale, "The Trained Cormorant," is an espionage story that references Solar Pons' archenemy, Baron Kroll (a sort of Moriarty figure in the Solar Pons canon).

The third in this group, "The Grice-Paterson Curse," is a fan favorite and rightly so in my view.  It's about a series of mysterious deaths which spookily afflict a family on the island of "Uffa," located near the Scilly Isles off Cornwall.  Don't want to spoil too much about this one, but it seems to me a tale which Derleth was uniquely suited to write.

Other favorites of mine from this collection are "The Triple Kent," an unusually bloody domestic triple murder story; "The Little Hangman," about the killing of an early released murderer; "The Swedenborg Signatures," another family curse story (I am a sucker for those); "The Penny Magenta," about an attempt to steal an apparently worthless stamp collection; and "The Camberwell Beauty," a London kidnapping case. Both of the latter two stories include delightful references to other mystery writers, the former to Poe and the latter to...

Well, read it yourself, girls and boys, and see who Pons' client is!  Cute.  Derleth's love of classic crime fiction is infectious.

Derleth's involvement with HP Lovecraft's fiction--he essentially had control over it in the nearly thirty-five years between Lovecraft's death and his own--has been highly criticized for the last several decades by Lovecraft scholars, most notably the omnipresent ST Joshi; but whatever one thinks of Derleth in connection with that matter, his Solar Pons tales in my view are delightfully engaging riffs on the Holmes canon and a most worthy contribution to mystery fiction.

Note: All of the Solar Pons tales, along with additional material, have been reprinted, in both paper and electronic form, by Belanger Books.  Now get reading, the game is afoot!
Posted by The Passing Tramp at 2:41 AM