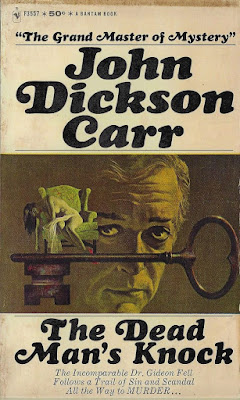 I've already written about The Dead Man's Knock here,  As I've said before, in this novel Carr presents us with the most agitated group of collegians this side of Who's Afraid of Virginia Woolf?  It's the only college novel I'm aware that ends with a...well, I really should spoil it, but it's definitely a unique denouement.  The book is too histrionic for some readers, like much of late Carr, but I rather enjoyed it more then I did the more highly regarded The 9 Wrong Answers), for the reasons I outlined in my review.  I believe Carr set nine detective novels in the United States; and I would say that The Dead Man's Knock is Carr's second best American mystery novel, after, by some considerable distance to be sure, The Burning Court.  Here is my ranking of this group of novels:

Incidentally, I have some Carr pbs I'd be happy to send someone if anyone is interested.  I will send them gratis to anyone in the next couple of days who can guess the remaining six works in the Ten Carrs of Christmas.  Overseas shipping on you!

To recap we have:

What will be the last six works in the Ten Carrs of Christmas?  Just email me your answers (click my about me link on this page), as posting here will tip off your competition.  In case of ties I'm going with the person who gets their answers in first.  You have at least thirty-six hours.
Posted by The Passing Tramp at 3:07 PM