The Ten Carrs of Christmas: The Ten Teacups (1937), aka The Peacock Feather Murders, by Carter Dickson, aka John Dickson Carr

On the tenth day of Christmas, my true love gave to me
Ten Teacups Luring

"Of the Ten Teacups, of course I dare not say a word."
--The Club of Queer Trades, by GK Chesterton

"I don't know what secrets may have crept out of Lisbon or Milan or Toledo four hundred years ago, to turn up in holes and corners of modern London.  I don't know about the Ten Teacups, or the rites they may have practiced...."

There will be ten teacups at Number 4, Berwick Terrace. W. 8, on Wednesday, July 31, at 5 p. m. precisely.  The presence of the Metropolitan Police is requested.

"Let me answer that with another question, Sir Henry.  Do you believe in the devil?"
"No," said H. M.
"....I don't mean Auld Clootie.  I don't mean an operatic bass in red tights.  I don't mean the versatile personage in our proper proverbs, who does so much: who quotes Scripture for his owns ends: who finds work for idle hands to do: who takes care of his own--in fact, from that description, you might imagine that the devil was standing for Parliament on the Labour platform.  No.  I mean The Devil."
--The Ten Teacups, by John Dickson Carr 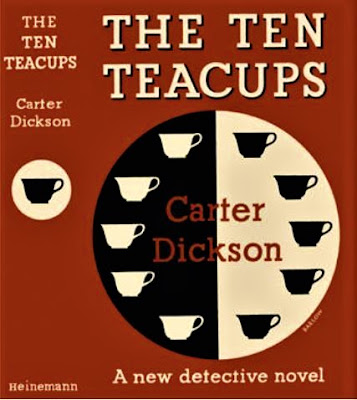 What makes British mystery, in the eyes of so many readers, so quintessentially cozy?

Well, cats, certainly, and bright cheery chintzes and comfy armchairs in country cottages, of course, and, absolutely beyond question, a nice cup of tea.  Right after you discover that battered body in the library and get violently sick in the bathroom (see the floor plan on page seventeen), there's nothing to revive you like a proper cuppa, no indeed (though hold the poison).  Just ask Gladys, the housemaid, to make you one--right after she's stopped all that bloody screaming.

In John Dickson Carr's hands, however, even tea can't be trusted to return us to normality.  Nor teacups.  The most seemingly innocuous homey things can take on a most sinister and menacing shape in his mysteries.

When The Ten Teacups opens, Chief Inspector Humphrey Masters--(lumme, it's the perfect name for this character) has received the Teacups notice quoted above; and he knows that it portends criminal mischief.  Two years earlier, a similar notice appeared before a man was found murdered in a deserted house, with ten rare and beautiful majolica teacups in peacock feather pattern arrayed on a table beside him.  And after that second notice appears it happens yet again, this time in an attic room where both the door and window are surveilled by the police.  Despite police precautions a man is found dead within the room, shot twice at point blank range, with no trace of a shooter to be found.  There are teacups--not nearly so fine ones this time--on a table by his side.  Will even Sir Henry Merrivale, expert in all things impossible, be stumped by this one?

One reason I get disappointed with much of the later Carr detective novels is that the ones from his heyday in the Thirties and Forties are so damn good.  They set such a high--dare I say impossible-- standard.  Yet in his heyday Carr managed to meet his own superlative standard, year after year, like an acrobat vaulting through an endless succession of impossibly high hoops.  Those later Carr mysteries might be good enough for other authors, but not for John Dickson Carr, master of the miraculous. 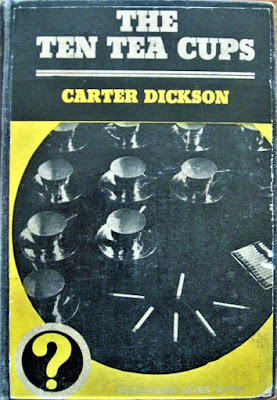 In his later mysteries, like The Dead Man's Knock and In Spite of Thunder (recently reviewed here), Carr strains so hard to create an exciting atmosphere by having characters roar and shout and run about; but in his earlier books he had no need for such histrionic hurly-burly.  The focus in The Ten Teacups remains tightly on the investigators and their investigation.  There are some colorful characters among the suspects--particularly the ample blonde femme fatale-ish Janet Derwent--but Carr doesn't dwell at length on their emotional states as he does in later novels.  Even young love gets short shrift.  And that's fine, because in this book the slay is the thing--and it's a really clever one.  No one knew better than John Dickson Carr how ingeniously to unlock a murder room; and in The Ten Teacups we witness one of his finest performances.

Even as Carr conducts this clue dense and highly complex murder investigation, however, he simultaneously creates an absorbingly uncanny London atmosphere.  When yet another Teacups notice popped up, I got more of a frisson than I did from anything that I ever read by thriller king Edgar Wallace.  This sort of performance calls not only for good plotting but for good writing as well.  Don't let anyone ever tell you that Carr in his prime could not "write":

A dozen eyes watched the house, but no movement could have been heard under the multitudinous noises of the rain.  In some places it fell with a flat smack, in others with a drizzle, in others with a steady splashing; but always sluggish, and like nothing so much as warm tea.

Carr makes tea as creepy as anything this side of Marjorie Bowen and Sheridan Le Fanu.  Plus there's a simply brilliant locked room murder. As a vintage murder fancier, I can't fancy anything more.  I fully agree with this contemporary review of The Ten Teacups:

The story itself is involved, exciting and and touched with that dash of the macabre and the sinister which is never absent from the detective stories written by Mr. Carr, either in his own name or under his pseudonym. The literary finish of the author's style is always a satisfaction to the reader.


On the ninth day of Christmas, what did I find?  Check in soon, I hope, and see.
Posted by The Passing Tramp at 3:15 AM