Shock the Monkey: The Case of the Grinning Gorilla (1952), by Erle Stanley Gardner 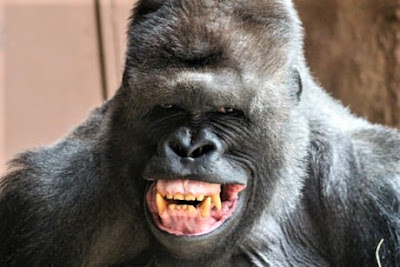 Somehow I never imagined I would come across a Perry Mason mystery where the redoubtable defense attorney gets pursued through an eccentric millionaire's nearly deserted mansion by a killer gorilla.  Yet, sure enough, this is just what I found in Erle Stanley Gardner's fortieth--if I counted right--Perry Mason detective novel, The Case of the Grinning Gorilla (1952).

In most American mysteries from the period, the titular "gorilla" would have been some nasty, hulking human bruiser with one ugly mug, who has it down for some reason on our series hero; but, nope, when ESG promises you a gorilla, you get an actual gorilla.  And then some!  Things get pretty hairy for our Perry, let me tell you.

It's all rather implausible and hard to believe--and I loved every utterly bananas minute of it.  This is one of the closest mysteries from the Fifties to a gonzo between the wars Golden Age detective novel that I can recall.  If it had a locked room or a devious murder gadget, much of it could have been conceived by crafty Golden Age master brains like John Dickson Carr or John Rhode.  It's amazing to me that ESG was able to come up with something so different (for him) at forty books into the series.  Truly, like Raymond Chandler once enviously wrote of ESG, the man had one fertile plotting brain.

The courtroom sequences come late in the book and are rather short, though entertaining as always.  (By the by, ESG's Hamilton Burger always seems something of an ass to me, in contrast with the splendid William Talman's portrayal on the television series, who always seemed too smart to lose every damn time to Perry, impressive as Raymond Burr was in the role.)  Much of the book is devoted to actual investigation by Perry, assisted by his loyal and ever eager secretary Della Street ("Right, Chief!") and hungry gumshoe Paul Drake.  There is also more than a bit of emphasis on Perry's implied romantic relationship with Della.  (I don't see how anyone could doubt there was one after reading this book.) 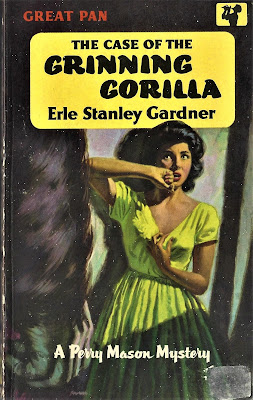 It all starts when Perry quixotically buys some effects from the estate of the late Helen Cadmus, beautiful secretary to Benjamin Addicks, "the eccentric millionaire."  (Yeah, that guy.  You know there's fun in store when an eccentric millionaire is involved in the mystery.)  It seems that poor Helen disappeared from the yacht of her employer one stormy night off Catalina Island.  Did she fall or jump from the boat--or could lovely, lost have been Helen pushed???

The court concluded that it was all an unfortunate accident, but canny Perry has decided doubts.  Now Perry has Helen's diaries and Addicks and his retinue want them back--badly.  Which only makes Perry more suspicious, of course.  And then things get Even Weirder.

We learn that eccentric millionaire Addicks bizarrely keeps gorillas caged at his house so that he can perform hypnotism experiments on them.  (Somebody call PETA!  Wait, they weren't around back then, were they?)  Well, this strange dude is an eccentric millionaire, after all, so you have to expect such things. I suppose.

Addicks also is hounding his former housekeeper, Josephine Kempton, whom he believes pilfered valuables from him, by writing bad references about her, effectively preventing her from getting another housekeeping job.  Kempton is suing Addicks over this matter and she is quite pleased when Perry, after reading Helen's diaries and making a visit to Addicks' grimly isolated and fortress-like mansion, Stonehenge, is able to solve this little mystery.

Perry faces a much bigger mystery, however, when a terrified Kempton calls the defense attorney out to the Addicks' mansion late one night.  There Perry finds Addicks stabbed to death and Kempton out cold on the floor.  Not to mention some of the gorillas are loose from the cages!  Where is Tarzan when you need him? 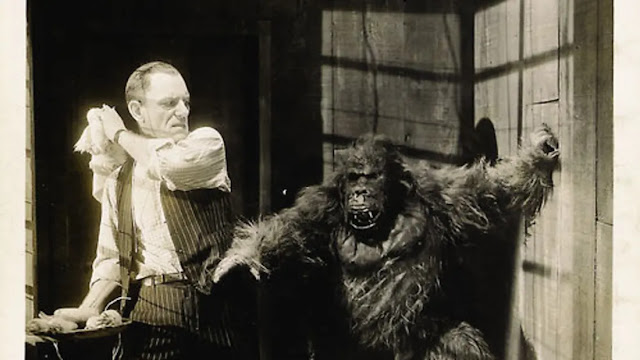 Kempton of course ends up being charged with Addicks' murder and Perry joins her ingenuous young attorney in mounting her defense.  It's a tough job, since Kempton says that it was not the butler who did it, but rather one of the captive gorillas!  Was this a crime of simian passion?  Or something yet weirder?

There are implausible elements to this story, to be sure, but if you will just go with it, The Grinning Gorilla is a tremendous amount of fun in the Golden Age vein.  I also liked the byplay between Perry and Della here, even if it is all very Fifties and somewhat sexist.

In his review of the novel Anthony Boucher, a dedicated Gardner fan, avowed that ESG was "largely at his best" here, although he complained about "those damned gorillas."  Despite the fact that they were "indispensable to the plot," they made the novel, in Boucher's view, "sound luridly pulpy" and the solution to Addicks' murder "verge on the farcical."

I say, lighten up already,  Tony, baby.  Think back to the great Golden Age of detective fiction, when writers, be they of classic British mystery or lurid American pulpery, like ESG at one time, dared to use their wildest imaginations, unimpeded by dreary reality.  Sometimes it's fun just to have fun. Who says a man can't encounter a rogue gorilla when down those mean streets he must go?

Yet I'm not surprised that the makers of the series waited until 1965 to film this one.  Personally, I'd like to see Raymond Burr getting chased by a gorilla.  Of course in another incarnation he'd already tangled with no less fearsome a creature than Godzilla, King of the Monsters, so maybe he was up to it still, despite the bulk he had added to his frame by that time.  The grinning gorilla was scary, no question, but at least we're not talking King Kong!

Posted by The Passing Tramp at 8:05 PM