One of the wealthiest men in the world when he lost his life during the First World War, Alfred Gwynne Vanderbilt was the second son of Cornelius Vanderbilt II whose family had made a fortune in the United States' railway boom....Horses, rather than business, however, were Alfred's passion....

An Anglophile with family connections in England...Vanderbilt spent as much time in Britain as in the United States.  His passion was carriage racing and he was often to be seen racing his carriages at great speed up from the South Coast to London, recreating the great days of private coach travel....

Vanderbilt was married in Reigate in 1912 at a private ceremony with just four witnesses.  Both he and his bride, another wealthy American, Margaret Emerson McKim, had been previously married, his first wife having divorced him for adultery with the wife of the Cuban ambassador to London who subsequently committed suicide.  McKim divorced her husband on grounds of cruelty and Vanderbilt faced a lawsuit from her husband on the grounds of alienation of his wife's affections.....

On 1 May 1915 Alfred Vanderbilt left New York on the Lusitania for a meeting of the International Horse Breeders Association.  He was also to have offered a fleet of wagons to the British Red Cross....

On the seventh day of the voyage the Lusitania was sunk by a [German] torpedo....

38 years old when he died [actually 37-TPT], he left a son by his first wife and two infants by his second wife.  In the immediate aftermath of the sinking lurid stories were printed in the papers recounting acts of bravery which seem to have been invented by journalists.  Nevertheless eyewitness testimony seems to suggest that Vanderbilt did assist child passengers onto lifeboats and that he probably did give up his life vest [to a woman passenger] even though he could not swim.


It was rightly said of Alfred Vanderbilt that "his love of horses was a ruling passion."

....Vanderbilt's first coach was the Venture, which started off at London and called regularly at the Metropole hotel, Brighton.  Later on Vanderbilt added the Old Times and these two coaches with their beautiful horses became one of the sights of Brighton.

There was huge excitement when the first Vanderbilt coach came to Brighton....

When the Venture reached Preston Park, Vanderbilt found the road lined with enthusiastic Sussex and Brighton folk eager to see the young sportsman.  They cheered when the glimpsed the coach and "spanking greys," children threw flowers and pretty girls smiled and blew kisses.  This continued all the way to the Metropole and Vanderbilt never forgot the enthusiastic reception....

Vanderbilt's handsome appearance and well-cut coaching attire appealed to the ladies.  One young female passenger in the coach even had the temerity to gently extract his handkerchief from his back pocket while he was engaged in guiding his horses and kept it as a souvenir.  This was no ordinary cotton square but a fine silk handkerchief decorated with images of horses.  Vanderbilt was aware of what was happening but allowed it just the same....

Vanderbilt ran his coaches for a six-week period from May to June, working from Tuesday to Friday....the journey lasted all of seven hours; you left London at ll a.m. and reached Brighton at 6 p.m.  all being well....for aficionados a trip on a Vanderbilt coach was worth every penny as well as being a valid reminder of old coaching days....

The outbreak of the Great War brought the glory days of coaching to an abrupt end.  It must have been a heart-breaking time for Vanderbilt because the Army commandeered the horses from the Venture and Old Times....

"Alfred Vanderbilt and His Horses," Hove in the Past

During the 1910s future mystery author Moray Dalton, who was five years younger than Alfred Vanderbilt, lived with her parents nineteen miles west of Brighton, haunt of Vanderbilt's coaches, at Littlehampton, another seaside resort town.  The war that put at end to Vanderbilt's coach runs and ultimately claimed his life (along with over one thousand additional passengers on the Lusitania) inspired Dalton, like many other literary literary inclined women who spent the war at home, to compose memorial poetry for the fallen, of which there were ever so many.

One of Dalton's poems, composed in honor of Rupert Brooke, I have discussed here.

Dalton also wrote a poem in honor of Alfred Vanderbilt, which less than ten days after his death was published in the Westminster Gazette and reprinted across the Atlantic Ocean in the New York Herald.  On May 17 it was also reprinted in prime horse country, in the Lancaster, Kentucky Central Record, with a little prefatory detail on Vanderbilt's relationship with England:

There is not a horse society nor a summer show of note in England but will feel the death of Alfred G. Vanderbilt.  In a quiet way he gave twenty pounds here and a hundred-pound-note there, a cup or a gold vase to the Royal, the International or the Richmond show, and in an unostentatious manner drove his own horses ans teams in the leading events in a way that made the stolid insular Britisher take the millionaire American to his heart as a good sportsman. 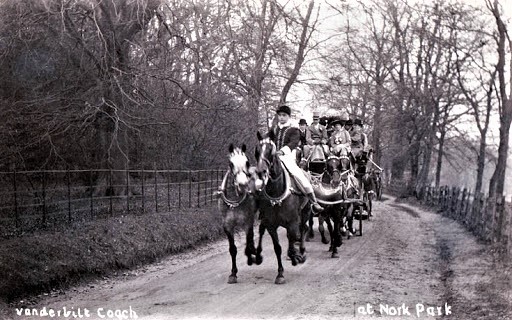 Never again to drive through Sussex lanes
On a May morning, never more to feel
Your strength as the fresh team pulls on the reins
And know yourself their master.  Did you steel
Your heart against the loss of all those things
That you had loved in happy years bygone,
Clear air and sunlight and recurring springs?
No, you thought of the helpless ones alone
The little children drowning in the sea.
"Sell all thou hast and give it to the poor."
The rich man in far off Galilee
Went away sorrowful, but God asked more
Of you than gold and lands, and you--oh, brave!
Ungrudgingly, when life was sweet, you gave.

RMS  Lusitania sank just eighteen minutes after it was torpedoed by a German U-Boat.  With so little time left, the resulting scramble of passengers for safety has been dubbed a case of "survival of the fittest."  Hence the accolades, like Dalton's, that were posthumously showered on Alfred Vanderbilt for his reputedly selfless behavior, sacrificing himself so that the weaker and less fortunate might live.

A passenger ship torpedoed during the Great War with much loss of life plays a prominent part in Dalton's debut Hugh Collier detective novel, One by One They Disappeared, published fourteen year's after Alfred Vanderbilt's watery demise.

Posted by The Passing Tramp at 5:18 PM