The Persistence of Murder: The Case of the Dark Stranger (1948), by Moray Dalton

As I understand it Dean Street Press will be reissuing five more Moray Dalton mysteries this winter. (A Dalton for Christmas!)  I intend to keep reviewing the Moray Dalton books throughout the year, focusing for now on the author's Hugh Collier series.  In the postwar years, after the publication of The Art School Murders in 1943, there appeared five additional Hugh Collier mysteries: The Longbridge Murders (1945), The Condamine Case (1947), The Case of the Dark Stranger (1948), Inquest on Miriam (1949) and, Collier's swansong and Dalton's penultimate detective novel, Death of a Spinster (1951).  There were also three non-series mysteries: The Murder of Eve (1945), Death at the Villa (1946) and The House of Fear (1951).

The Condamine Case has already been reprinted and reviewed by me here.  Today I thought I would take a look at a Dalton which I must have read nearly two decades ago, one which I have, most unusually, in the jacket: The Case of the Dark Stranger.  It's one of the books that won me over to Moray Dalton in the first place. 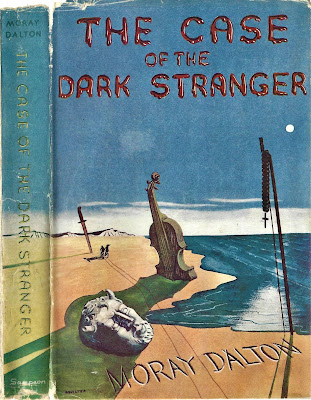 And quite a jacket it is too!  From what I have been able to see of the Dalton dust jackets, the author's publisher, Sampson Low, tended to produce high quality work in this department.  But truthfully these books are so rare in their jackets--and rare without them for that matter--that it's hard to say definitively.

Certainly Stranger has a fine one, however--a product of the surrealism movement in art that so influenced book and film design in the Forties, as when notorious Spanish surrealist Salvador Dali created the famous dream sequence for British director Alfred Hitchcock's film thriller Spellbound (1945).

On the Dalton jacket, the exaggerated satyr head, the crucifix/rosary, the violin and the knife all are well chosen items from the book, as is the central haunting image of the boy and girl bicycling across the beach as the ocean tide flows.  It's a memorable jacket, seemingly deliberately recalling Salvador Dali's influential 1931 painting The Persistence of Memory; but then Stranger is also a memorable book, concerning the persistence of murder.  As Agatha Christie used to say in her books (and Dalton says in thus one), old sins have long shadows....

Moray Dalton was one of the British mystery writers who in the post-WW2 years was moving decidedly in the direction of what Julian Symons called the crime novel, i.e., writing mysteries with the same dramatic values as mainstream fiction.  When I read The Case of the Dark Stranger I am reminded not only of postwar Margery Allingham and Henry Wade but Ruth Rendell, or even Rendell's brilliant alter ego, Barbara Vine.

Although it's more stripped down and economical than most Barbara Vines (about 80,000 words by my count), Stranger like many Vine novels has twin mysteries, one of them in the present, the other buried, but decidedly not resting, two decades in the past.  There's also the pregnant prologue so beloved by modern mystery writers, and a fitting epilogue as well.

Another interesting thing about the novel, which remarkably goes unremarked in the plot summary on the flap, is that the "present day" in the novel is set in 1912, when Dalton herself, who was born in 1882, was thirty years old.  (Thus the two decades old part takes place in 1892, when Dalton was ten, roughly the age of one of the main characters it impacted.)

When Dalton's series sleuth Hugh Collier appears in the novel, in tandem with his superior Detective Inspector Cardew, he is ranked merely as a detective sergeant at Scotland Yard.  The first published novel in the Hugh Collier series, One by One They Disappeared, appeared twenty years earlier, in 1929, and takes place sometime earlier in the 1920s, by which time Hugh Collier is a detective inspector.  (Cardew appears in the later series as well, as a Chief Superintendent.)

Thus Collier must have been very young indeed in 1912.  Dalton says that he was promoted to DS at a very young age and that he seems "a mere boy in comparison" to Cardew, so I'm guessing he was born around 1890?  That makes him a bit older in the later series than I would have thought, but there it is.  Having a younger Collier appear in a mystery is a fun idea.  It reminded my of the Endeavor television series riff on Morse, or Ruth Rendell's back dated Inspector Wexford detective novel, The Monster in the Box (2009).

The present day story line in Stranger concerns the disappearance and presumed deaths of charming young siblings Ronnie and Diana Cordelyon (he is thirteen, she sixteen) at the Cornish sea resort of Port Igal.  It is believed that they met their twin demises while bicycling along the rocky beach and getting trapped by the remorseless, encroaching tide.

Fatherless and burdened with a neurotically self-centered mother, the pair was left to run rather wild in the town, although one person who kept a keen eye on them (particularly the lovely Diana, with whom he is infatuated) is Sir David Blair, a middle-aged baronet lately returned from Malaysia.  You might be a bit reminded of Thomas Mann's novella Death in Venice, published in...1912.  Like T. S. Eliot's Murder in the Cathedral, Venice not  a murder mystery, rather a foreboding tale of fixation, although the central relationship is somewhat similar to what you find in Stranger.

Sir David believes that the story of the supposed tragic fatal mishap of Ronnie and Diana simply does not add up; and after visits with the young people's reclusive uncle, Francis Cordelyon, at Pear Tree Cottage, Francis' elegant dollhouse like home in Richmond, London, David becomes convinced that the young people's fate, whatever it really was, is somehow tied in with a mysterious affair of two decades ago that occurred at Solis Court, the splendidly isolated Dorset country home of the Cordelyons.

Soon there is another death that takes place at Port Igal, this one indisputably murder.  The local police, stymied as usual, call in the Yard, in the form of the aforementioned Cardew and Collier.  Eventually the plot threads are untangled, in a moving tale of what Dalton calls another case of  "man's inhumanity to man."  (Readers who know something about Dalton's own life might be tempted to speculate as to how much of this novel was influenced by personal events of her own.  I suspect that some of it was.)

With The Case of the Dark Stranger, we have moved a long way away from the whimsical artificialities of Golden Age detective fiction and thrillers (including Dalton's own first essay in the series sleuth field, One by One They Disappeared).  Stranger is uncommonly well-characterized (down to all the minor characters), convincingly placed and exceptionally engrossing--and it comes highly recommended by this blogger, with or without the dust jacket!  I hope we will see it back in print later this year.
Posted by The Passing Tramp at 7:17 PM