English crime writer James Hadley Chase is best known today for his scandalous debut novel, No Orchids for Miss Blandish (1939), in the writing of which Chase infamously borrowed heavily from William Faulkner's lurid self-described potboiler Sanctuary (1931).  But Chase didn't stop there, oh no.  (By the by, He Didn't Stop There easily could have been the title of a Chase crime novel.)

In a 1948 letter Raymond Chandler caustically observed that a "fellow over in England named James Hadley Chase, the distinguished author of No Orchids for Miss Blandish (which is half-cent pulp writing at its worst) made a practice in one of his books in lifting verbatim or almost verbatim passages from my books and from those of Jack Latimer and Hammett.  He was forced to make a public apology...."  In a letter from the previous year, Chandler identified the offending Chase novel as Blondes' Requiem (1945), which Chase wrote under his "Raymond Marshall" pseudonym.  (All the better to hide the plagiarism with, my dear!) 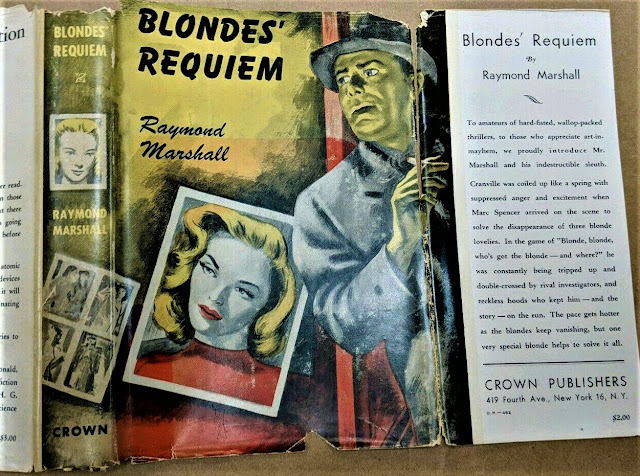 To the extent that people have taken notice of Chandler's account, what they seem to remember is that Chase plagiarized Chandler in Requiem.  However, in 2017 the late and much-missed writer Bill Crider mentioned in a blog post that he had read Requiem, which had been reissued by Stark House (as Blonde's Requiem), to see whether he could spot similarities between it and Chandler's work.  He concluded that he could not.

Speaking for myself, having just looked at the first page I didn't notice similarity to Chandler but rather to another rather famous hard-boiled writer.  Marked similarity in fact.  In fact, this writer most definitely has been plagiarized.  Let's compare.  Here are the first lines of Requiem:

One look at Cranville was enough.

As I drove down Main Street a smell of dirt and decay drifted in through the open windows of the Packard.  In the far distance I could see the high brick stacks of the smelters stuck against the skyline.  They belched black smoke that had, in the course of time, yellow-smoked everything into uniform dinginess.

There was a sordid, undisciplined feeling about the town I didn't like.  The first policeman I saw needed a shave, and two buttons from his uniform were missing.  The second, directing traffic, had a cigar in his mouth.

There's a crime writer being plagiarized here, all right, but it's not Chandler.  It's Dashiell Hammett.  Let me quote some lines from the first couple of pages of Hammett's debut 1929 crime novel Red Harvest:

I first heard Personville called Posionville by a red-haired mucker named Hickey Dewey in the Big Ship in butte.  He also called his shirt a shoit.  I didn't think anything of what he had done to the city's name....A few years later I went to Personville and learned better.

The city wasn't pretty.  Most of its builders had gone in for gaudiness.  Maybe they had been successful at first.  Since then the smelters whose brick stacks stuck up tall against a gloomy mountain to the south had yellow-smoked everything into uniform dinginess.  The result was an ugly city of forty thousand people, set in an ugly notch between two ugly mountains that  had been all dirties up by mining.  Spread over this was a grimy sky that looked as if it had come out of the smelters' stacks.

The first policeman I saw needed a shave.  The second had a couple of buttons off his shabby uniform.  The third stood in the center of the city's intersection--Broadway and Union Street--directing traffic, with a cigar in one corner of his mouth.  After that I stopped checking them up.

I suppose Chase's philosophy was if you are going to steal, steal from best or why steal at all; but damn it all if Chase didn't manage to turn Hammett's gold into dross (speaking of smelters).  What an awful line, compared to the original, is They belched black smoke that had, in the course of time, yellow-smoked everything into uniform dinginess....  It's just a few changes here and there, but all of Hammett's hard hitting poetry is lost.  Not to mention how Chase loses the splendid capping snark about the Personville police in the line After that I stopped checking them up.  In it you detect the difference between a master and a second or third-rater--though I know that Chase has his advocates and that for many decades he sold like gangbusters around the world in paperback.  Stark House has reprinted several of his novels in twofer editions.

Chase's corrupt town motif in Requiem certainly recalls Red Harvest, although after the first couple of pages Chase's novel seems to segue a bit into Chandler's The Big Sleep (1939), where a rich old man hires a private detective to deal with the vexing matter of some vanished blondes.  I'll have to read over that part and compare it with Ray's writing.

Although as plagiarism nothing which I'm aware of still compares to this!
Posted by The Passing Tramp at 8:07 PM