"I decided just to write stories": Rex Stout on his Mystery Fiction

In 1935 thirty-two year old literary critic John Rensselaer Chamberlain published, in the Books of the Times column in the New York Times Book Review, a review of Rex Stout's newly published Nero Wolfe detective novel, The League of Frightened Men, Stout's second in what would prove a long, hugely popular and critically acclaimed series of murder mysteries.  John Chamberlain's review of Stout's novel encapsulates much of what mystery writers hate about literary critics, praising the book in a condescending backhanded way, seemingly in order to let people know that while he, John Rensselaer Chamberlain, may read and enjoy mysteries on occasion, he always--like the man who guiltily (though after much anticipation) visits the occasional house of ill repute--returns home at the end of his fun to the wife and mother of his children (this noble lady being Serious Literature in this possibly strained analogy).

John Chamberlain also thoughtlessly revealed the identity of the murderer in his review of Stout's novel--because, one supposes, Chamberlain believed that only insignificant minds could actually care about the whodunit aspect of a mystery.  I have always felt there should be a special place in hell for book reviewers who deliberately spoil mystery solutions in their reviews, and I make no exception for John Rensselaer Chamberlain.  See ya in hell, John!

[It] is a mystery story that has imaginative qualities beyond the ordinary....The writing...is good-humored, breezy, colloquial.  The characterization is sharp, and reminds me constantly of the fact that Rex Stout was a legitimate novelist before he took up the trade of mystery monger.

And. there you go!  Into Rex the critic slipped the sharp knife.  Although Stout had written a detective novel beyond the ordinary, in the very act of writing detective novels at all he had cravenly abandoned the ranks of "legitimate novelists."

It is this sort of condescension that became a bugbear to altogether too many mystery authors, inducing them, in the hope of being taking seriously as writers, to seek to become "crime novelists"--people who "transcend the genre" by emphasizing in their mysteries everything but the actual mystery.

The year before, in reviewing Dorothy L. Sayers' The Nine Tailors, John Chamberlain had adopted a similar line:

....Hating the usual run of mystery stories, we were decoyed into reading [Dashiell Hammett's] "The Thin Man" by virtue of a nonchalant Greek detective's knowledge of speakeasy mores.  Somehow the mystery went down easy with a round of old-fashioneds.  Could it be that we were weakening? We swore it could not be true.  But maybe we were weakening. For, dipping into Dorothy Sayers' "The Nine Tailors," we were beguiled by her manner of mingling an essay on the ringing of church bells...with a novel about theft and murder.  And when Lord Peter Wimsey turned from change-ringing to deduction, we somehow stayed for the show.

The show (and we admit it through clenched teeth) is not at all bad.  It is not, thank Heaven! pure mystery; that would be too much.  Miss Sayers makes the sleuthing go down easy by mixing it up with an antiquarian's interest in fourteenth century Norman apses, in the character of the abbots of Catholic England, in the art of change-ringing, in the history of the casting of bells.

Reading Dorothy Sayers, who is an intelligent woman as well as a writer of mystery stories, we wonder how much of our prejudice against the heirs of Sherlock Holmes is justified....More mysterious than her mystery is the way in which she makes the abstruse art of bell-ringing a living, integral part of her story.  Sooner or later she will be making chess, the Einstein theory, the art of concocting Welsh rabbits, heraldry or cricket germane to a mysterious death.  She ought to be hired by the schools to mix textbook matter with gumshoe work; then every student would pass.

Perhaps Sayers might even have become a "legitimate novelist," had she tried.  Well, John Chamberlain had yet to read Gaudy Night.  (Reviewing that novel that same year in the Books of the Times column was left to Robert Van Gelder, who proclaimed Gaudy Night--whether with exaggeration or not I will leave for you to decide--"the Louvre Museum, the Coliseum, the Mickey Mouse of detective stories.  In it the mystery writing technique is lifted from the plane of checkers to the plane of chess, and the chess figures come alive.  Ideas rather than mechanics move the plot....")

John Chamberlain liked mysteries, when there was something else besides the actual mystery on which to focus his mind.  You don't read a detective novel to find out whodunit, really: you read it to learn all about bell ringing and Norman apses!  Increasingly this became the prevalent view in mystery criticism in the Thirties, marking the beginning of the decadent period in detective fiction, when the pure and austere detection of, say, Freeman Wills Crofts was beginning to seem simply passe, even banal, to many reviewers.  And much of the public seemed to follow along.

To Rex Stout's credit, however, he never fell into this trap.  He found a way to make his mysteries interesting to readers without resorting to mining details from pamphlets on church bells.  For the next four decades Stout penned his tales of Great Detective Nero Wolfe and his snappy assistant Archie Goodwin, never failing to, alas and for shame! entertain.  Of course it's no doubt true that many of Stout's readers peruse his books more to enjoy the patter between Wolfe and Archie and to soak up the atmosphere of Wolfe's brownstone than to solve the given murder mystery at hand, but Stout at least never neglected the mystery element in his books.  If you truly love mystery for mystery's sake (unlike, say, Mr. Chamberlain), Stout always provided you with one.

Dorothy L. Sayers may never have been aware of John Chamberlain's praise for her, across the pond, as an "intelligent woman as well as a writer of mystery stories," but Stout for his part read Chamberlain's review and immediately was provoked to pen a characteristically self-effacing yet still wryly pointed response.

Why did Rex Stout cede the laurel of the "legitimate novelist"?  The answer lies below, in Stout's Apologia Pro Vita Sua (a defense of one's life), which was published in the Times a week after the appearance of John Chamberlain's review of The League of Frightened Men.  Appropriately for the creator of noted gourmand Nero Wolfe (Archie has a healthy appetite too for that matter, though throughout the series of mysteries he retains his boyish figure, much to the delight of the ladies), the answer to this literary riddle seemed to revolve around eating.  Stout wrote: 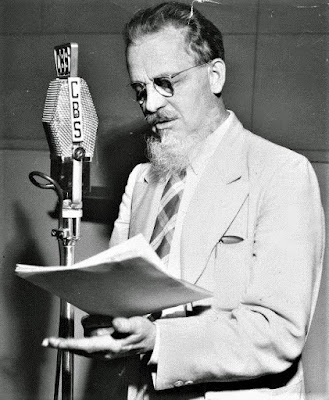 Once I lived in humble hovels
And wrote a few legitimate novels.
Now, tiring of the pangs of hunger,
I ply the trade of mystery monger.

I wrote, though eating not bewhiles,
Of fate profound and secret trials.
Now--calmed the empty belly's fury.
I write of guilt and trial by jury.

I took men's souls on bitter cruises,
Explored the heart and necked the Muses.
But now to me I say: poor critter,
Be fed, and let who will be bitter.

Of course Stout's "legitimate novels" have been out of print for decades, I believe, while his mysteries have gone through printing after printing.  It seems that there's nothing like a little murder puzzle to enliven our everyday lives.


Over three decades later, at a 1966 Books and Authors luncheon, Rex Stout, now an octogenarian and President of the Authors' League of America, commented knowingly to his audience of authors, "we all know what book reviewers are."  Perhaps John Chamberlain was one of the reviewers he had in mind.  Even in his eighties, Rex Stout had a good memory.

Stout explained that thirty-seven years ago he had decided to have a go at writing mainstream novels and had spent five years hard at it, before realizing "that if I went on trying to make serious comments about human character and human problems I would never turn out to be a Dostoevsky or a Balzac, so to hell with it, I quit."  At that point he resolved "just to write stories and to try to make them as good stories as I could."  Thus were Nero Wolfe and Archie Goodwin born.

Stout complained that today, in 1966, his latest Nero Wolfe novel, The Doorbell Rang, was being lauded by critics and commentators alike not for being a particularly good story, but for cocking a snook at the FBI and J. Edgar Hoover.  However, when he wrote the novel, Stout modestly protested, "all I had in mind, as I always have, was to try to make it as good a story as I could."  He was not trying, he declared, to make some grand political statement about the state of American society in the Sixties.  He lamented that to keep getting such acclaim for future novels he supposed he would have to find a series of new satirical targets, such as "the Salvation Army, the Roman Catholic hierarchy, the Boy Scouts, the John Birch Society, the Ku Klux Klan and the Women's Christian Temperance Union."

"Maybe that's what I ought to do," he ruminated whimsically.  "Instead of trying to write good stories, maybe I ought to be a professional crusader."  After all, that way Stout might, after three decades, finally "transcend the genre."  Fortunately for fans of mystery in mysteries, Stout would publish five more novels over the decade of life which remained to him, and they continued to be good stories--though Stout I suppose disappointed those who wanted Nero and Archie take on the Boy Scouts!
Posted by The Passing Tramp at 11:17 AM