Bower of Carnality: Too Many Clients (1960), by Rex Stout


Director Billy Wilder's titillating best picture Oscar winning film The Apartment, about an insurance clerk who climbs the corporate ladder by lending his domicile to his superiors for use as a cite to carry on extramarital sexual liaisons opened in American theaters on June 30, 1960. Author Rex Stout's Nero Wolfe detective novel Too Many Clients, about the murder of a randy plastics executive at his "bower of carnality" (as its colorfully termed in the novel), was published just under four months later, on October 28.  Stout's novel was already in the hands of his publishers by the time The Apartment opened, for Stout had written it in just thirty-five days, between May 6 and June 22; but one has to wonder if publicity about the upcoming film influenced the writing of Too Many Clients.  Or perhaps it was simply coincidence.  In any case, both the film and novel offer an interesting wry look at mores, sexual and otherwise, in the urban white collar world in the American mid-century. 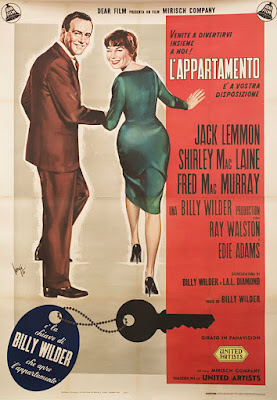 Speculation about The Apartment doesn't come up in John McAleer's biography of Rex Stout, which, despite the bio's massive length, provides only limited literary analysis of individual Nero Wolfe detective novels.  After noting the time it took Stout to write it--I think McAleer diligently does this for almost all of the Wolfe books (Stout kept good records)--McAleer adds: "Archie here is at his funniest and most visible.  Maria Perez is the liveliest foreign girl to appear in the series since Anna Fiore in Fer-de-Lance, and the late Thomas Yeager...is a superb portrait of the businessman type that Rex despised."  And that's it.  There's not a lot to hang a hat on here, really, so in the lines below I shall provide my own take on this excellent detective novel.

Author and critic Julian Symons, as I noted in the last blog post, maintained that the Nero Wolfe books drastically declined after 1950, but a decade after that with Too Many Clients, I couldn't see evidence of that decline.  To the contrary, this is a strong Wolfe indeed.  It begins originally, with Archie getting requested to perform an investigative service for a man pronouncing himself to be Thomas Yeager, senior vice president of Consolidated Plastic Products.  It seems that Yeager thinks he is being followed to a certain location and he wants Archie to trail him to that location to discern whether this is true.  Archie soon discovers, however, that Yeager has been murdered and that the man identifying himself as Yeager was not in fact he. 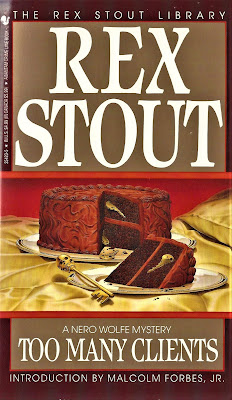 The real Yeager's dead body is found covered over with a tarpaulin at an excavation cite in a slum district, across from the very building which the false Yeager had identified as his destination.  Upon further investigation Archie finds that the building conceals a love nest, or sex pad as it might have been called a few years later: Thomas Yeager's aforementioned bower of carnality.  He also finds that Yeager actually was murdered there, his body being later removed outside of the building.

The bower is maintained by resident caretakers Cesar and Felita Perez, who knew about their employers' goings-on (they had to clean up after him), but they insist that their beautiful sheltered though rather inquisitive daughter, Maria, knew nothing about it.

In fact it was Cesar who moved Yeager's body out into the street, but he and Felita insist to Archie they did not kill him; and they want to hire the gumshoe to help them out of this jam. (Out of respect for the body, Cesar put the tarpaulin over Yeager's body, leaving fingerprints, which the police surely will trace to him if they ever find out about Yeager's bower.)  While he's in the bower with the Perezes in comes one of Yeager's lady friends (she has her own key), a stage actress named Meg Duncan.  She wants to retrieve a cigarette case which she thinks she left there and she ends up hiring Archie to find it for her and return it.  (You will be getting now, oif you haven't read it, why this book has its title.)

Ace detective Saul Panzer not being available, Archie installs Fred Durkin there to watch for future visitors and he tries to convince Wolfe, quarterly taxes being due, that they might have a lucrative case here.  Eventually they do, when Fred catches another lady in the bower, Julia McGee, who claims that she is Yeager's secretary and that the only thing she ever did there was a little dictation.  She brings in the president of CPP, pompous Benedict Aiken, who ends up hiring Wolfe, with the connivance of the board of directors, to keep the existence of the bower from becoming known.  (Scandal, don't you know.)  Another would-be client, Thomas Yeager's overbearing widow, comes into the picture as well, demanding that Wolfe find out who killed her husband, since CPP doesn't really care about that matter per se.  There's also yet another one of Yeager's lady friends who comes into the picture, but I've probably said enough (or more than enough) about the plot already.  Some people say plotting was not a strong suit of Stout's, to which I say, like certain characters in this books, "balls."

In this novel we learn more here about Wolfe's and Archie's (and implicitly Stout's) attitudes about sex, in a book that I actually found more serious than a lot of the works in the Stout canon.  (There's even a case of spousal abuse, about which I would like to say more, but it's too spoilerish; let me just say that the meaning of Archie's response raises some interesting questions.)  Stout again gets in some good licks at mid-century corporate culture, a subject in mystery which I find perennially fascinating (Stout's contemporary author Patrick Quentin was good on this subject too, but he wasn't nearly so prolific as Stout.)  I love when Wolfe contemptuously asks the sputtering Aiken, "How the deuce did you get to head a large and successful corporation?"


Of course in his focus on upper class white America (people with the money to pay Wolfe's fat fees), Stout has been accused of, like film director Woody Allen, portraying a New York denuded of black and Hispanic people; and one senses that in Too May Clients Stout wanted to rectify that oversight a bit by introducing into the story the poor Puerto Rican couple, Cesar and Felita Perez, caretakers of the rich man's bower, and their daughter Maria.  Apropos of The Apartment, I might note that the next year's best picture, West Side Story, concerned poor Puerto Ricans and a beautiful girl named Maria.  I find it strange that in his Stout biography Professor McAleer refers to Maria Perez as a "foreign girl."  I presume she was born in the continental United States, but in any event her parents as Puerto Ricans would have been U. S. citizens.  Puerto Ricans had been so under American law for decades.  "My name is Cesar Perez," Cesar announces.  "I am a citizen of the United States of America."  Maria was not a "foreign girl."  But then a lot of people miss this point even today.

As for the mystery, it's nicely carried out by Stout, though Wolfe has some of the investigation done by Saul Panzer, invisibly to Archie and thus invisibly as well to the reader.  (However, one key point I would argue, is still surmisable by the reader.)  All in all the book is a delight for the mind.  In his introduction to the 1994 Bantam edition Malcolm, aka Steve, Forbes, Junior praises Stout for writing a mystery about a "high-powered, sex-crazed business executive" with such "nonprurient, critical detachment"; and, indeed, Archie's one single mention of a woman's nipples is as direct as the book gets when it comes to copulation and sexual allure.

Moreover, Stout as usual delights with his style and as his faultless sense of social observation. "Another point against him was that he had no hat," observes Archie.  "Ninety-eight per cent of men who can pay big fees wear hats."  Steve Forbes points out in the introduction that the next year John F. Kennedy would go hatless at his inauguration and soon hats for men would become "old hat."  Somehow the Nero Wolfe books were never quite the same.  Mid-century style helped give them their pulsating life.

Critics embraced Too Many Clients.  Anthony Boucher, who on the whole preferred the Nero Wolfe novellas to the novels, found it "markedly ingenious."  Sergeant Cuff in the Saturday Review of Literature pronounced Stout's novel "easily among his best."  James Sandoe declared it "one of Mr. Stout's brighter books" and an "[e]xcellent diversion."  Just over eighteen years ago now (Where does the time ago?), a fetching adaptation of the novel aired as part of the excellent Nero Wolfe series starring Timothy Hutton and Maury Chaykin.  It may not be the best film of the series, Clients being perhaps a little cerebral for television, but it's worth it all just to see the visualization of the Thomas Yeager's bower of carnality.
Posted by The Passing Tramp at 3:05 PM