Archie Goodwin and That Bottle of Dom Perignon: Some Thoughts on Masculinity in Mid-Century Mystery

WARNING: In the following post there are SPOILERS to the Rex Stout detective novel Too Many Clients (1960).  Not to the identity of the murderer but to other aspects of the mystery concerning two of the characters.  Read ahead at your own peril.

Rex Stout's Too Many Clients, reviewed by me in my last post, concerns the murder, in his secret "love nest," of satyric plastics company executive Thomas G. Yeager.  Archie gets pulled into the case by a man claiming to be Yeager, who tells Archie that he thinks he is being followed to a certain location (said love nest) and asks Archie to trail him to that location to determine whether this is indeed true.  It turns out that this man is impersonating Thomas Yeager, the real Thomas Yeager having been murdered, though only after the impersonation was carried by out by this man.

Over the course of the case we learn that said impersonator is really Austin Hough, an assistant professor of English literature at New York University (Those professors!), and that his wife, Dinah ("Di"), was one of Thomas Yeager's many lady friends.  Archie had been dubious about Hough from the start, as Hough had come to visit Nero Wolfe's brownstone wearing a $39.95 suit that "didn't fit and needed pressing" and a $3.00 shirt "on its second or third day."  But it's more than that too: "There was nothing wrong with his long bony face and broad forehead, but he simply didn't have the air of a man who might make a sizable contribution to Nero Wolfe's bank balance."  Sad Sack Hough does not have the confidence of the rich and entitled. 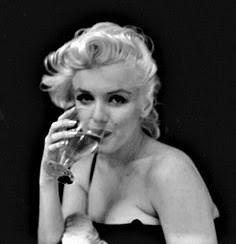 And that's indeed true, since Hough is actually a downtrodden college assistant professor (not even a full one), wearing gray socks with little red dots, the tops of which fall down "nearly to his shoes."  Later on, Archie encounters Dinah Hough at the Yeager love nest, where she had come to retrieve an umbrella; and though she claims her visit to the love nest had been purely innocent, Archie can tell that she's a hot to trot filly, as it were.  Later, when Archie meets up with Austin Hough again, at Nero Wolfe's office (Hough plaintively demanding all the while, "Where's my wife?"--he never seems to refer to her any other way), Archie tells us:

I seldom feel sorry for people Wolfe has got in a corner....but I had to move my eyes away from Austin Hough.  His long bony face was distorted he looked more like a gargoyle than a man.

Hough admits that he perpetrated the imposture with Archie because he wanted the real Thomas Yeager to know that someone knew about his affair with his wife, so that his wife would know too.  "I couldn't tell her," he explains, "but I wanted her to know I knew."  A self-flagellating Hough reflects:

Of course my wife shouldn't have married me....I was a fool to think that I might still save our marriage, but I did.  She wanted things that I couldn't supply, and she wanted to do things that I am not inclined to and not equipped for.  She couldn't do them with me, so she did them without me. ...About a year ago she suddenly had a watch that must have cost a thousand dollars or more.  Then other things--jewelry, clothes, a fur coat....occasionally she came home after dawn....I descended to snooping....

Archie wonders what this pathetic cuckolded man will do when he sees his wife again, knowing that his fears were true and that she definitely was having it off with Thomas G. Yeager.  (Archie tells him he knows Di lied when she told that she had only been there once and had not stayed long.)  "[W]hat was he going to say?" Archie thinks: "Was he going to explain that he was responsible for her finding a reception committee when she went to get her umbrella?  Was he going to admit--I turned that switch off.  He had married her, I hadn't."


Later, when Archie sees the Houghs at their apartment, he finds a now assertive Hough, who vulgarly says things like "Balls," rather than moonily quote prose and poetry.  Archie finds Hough has beaten his wife up, very badly.  "I have seen better-looking corpses," he pronounces after getting a looks at Di.  "I was afraid of what would happen if I told her [that I knew about her]" Hough explains.  "Now it has happened."

The couple answers Archie's questions and Hough tells Archie that he can go now.  "She's your wife, not mine," Archie reiterates (out loud this time), "but has a doctor seen her?"  "No," responds Hough.  "I was filling the ice bags when you rang the bell."  Archie makes his eyes go to the stricken woman (just like he had to make his eyes go to the pathetic, gargoyle like Hough on his early visit) and he asks her if she wants to see a doctor, to which she simply says, "No."

"Send her a bottle of champagne," Hough says snidely as Archie leaves.  Di had been drinking champagne and flirting with Archie when he met her at the love nest.

Archie does order champagne--not for Di, however, but for Hough.  He specifically asks for a bottle of Dom Perignon, which was the champagne that Yeager had stocked at the love nest.  He signs the card to Hough, "with the compliments of Archie Goodwin."  He adds to the reader: "I have often wondered whether he dumped it in the garbage, or drank it himself, or shared it with her."

Exit the Houghs, but they leave questions in their wake, like what Archie was doing when he sent Hough that bottle of Dom Perignon?  For some people the episode is a clear cut matter of Archie congratulating a fellow male for asserting his masculinity against an errant wife who had undercut it.  You beat your naughty wife until she looked worse than a corpse, here's to you!

At the Thrilling Detective website Marcia Kiser writes that "Archie is always the White Knight [in relation to women]....which makes Archie's actions in Too Many Clients (1960) surprising when, after he learns Arthur Hough has beaten his wife, Archie sends Mr. Hough a bottle of Dom Perignon, with his compliments and paid for by him personally--tacit approval of the beating."  And at the LibraryThing message board, a disgusted commenter, AdonisGuilfoyle, writes: "Archie's celebration of the cuckolded husband's cowardly attack on his wife--yeah, your a real man now, Professor!--went too far for me."

This simply can't be right, in my estimation.  Such behavior seems utterly at odds with the Archie we know and love from Stout's series of tales.  (Archie must be one of the most beloved characters in series detective fiction.)  Not only that, but Stout goes out of his way to describe how badly beaten up Di is and how Archie is appalled to have even to look at her bruised face.  In the television series, a clearly angry Archie bellows at Hough, when he answers for Di, "I was talking to her!"  However, this is an invention, the episode remaining more ambiguous in the book, especially for modern readers.  The past, as someone like Austin Hough might remind us, is a foreign country.


Certainly vintage mystery is full of retrograde and reprehensible attitudes about women, representative of their times.  So is older fiction in general, and cinema as well.  In the Thirties there was a lot of talk, including from women themselves, about women wanting "cavemen" for husbands, assertive he-men who will take charge and take no prisoners.  Actor James Cagney made a big splash when he shoved a grapefruit into a woman's face on the big screen, Clark Gable when he, playing a wicked chauffeur, viciously decked Barbara Stanwyck's night nurse.  Why, these were men with red blood in their veins!  Or so the thinking ran.

After World War Two, when many women under patriotic impetus had ventured out into the workplace and ran households all by themselves, men, home from the war, wanted to reassert themselves; and emblematic of this is the hugely popular detective fiction of Mickey Spillane, whose series sleuth Mike Hammer knew how to put women back in their places.  He even shoots one in the stomach.  In Spillane, not only is feminism stillborn, it seems, but chivalry is dead. 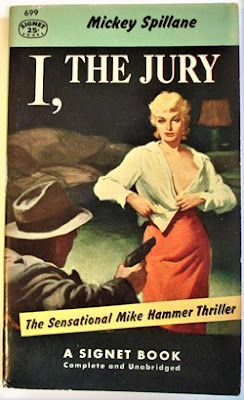 Archie Goodwin, however, is nothing if not chivalrous.  I will say again, it's inconceivable to me that he cold have been back slapping Hough for so viciously beating a woman.   To be sure, a point is made that Hough is a milquetoast in the beginning of the novel, perhaps even impotent.  (She wanted to do things he is not equipped to do.)  He's not much of a man, by Fifties mid-century standards, or even, one might argue, today's.

Archie is no knuckle-dragging neanderthal, a brute man like Spillane's Mike Hammer.  Rather he's a charming roguish trickster, or a joker as the perpetually fuming Inspector Cramer calls him.  How would Archie respond, in an era where it was still widely believed that a husband had the right to chastise his wife for her misbehavior ("She's your wife, not mine," Archie says), when a husband snidely tells Archie to send his wife champagne to make her feel better.  Why, sarcastically of course, by ironically sending to the husband the same champagne his wife drank with another man, who gave her the kind of relationship she wanted.  Here you are, big man, you beat up a woman, congratulations!  Now what?

What would Hough do with that champagne, Archie wondered: Dump it, drink it, or share it with his wife (possible reconciliation?).  Archie, and we the readers, never find out.

Subtlety can be frustrating but it can be mentally stimulating too.  I put my bean to work on this problem and this is the answer I came up with.  I hope I'm right!  Readers, what say you?
Posted by The Passing Tramp at 6:50 PM