I was very disappointed with the results of Poirot's bomb attack on Chinatown.

If you asked a lot of people for their choice for Agatha Christie's "worst" Hercule Poirot mystery, the fourth Poirot "novel," The Big Four, would get the nod, I'm sure.  I put novel in asterisks because the book, like Christie's Tommy and Tuppence saga Partners in Crime, is really a collection of loosely integrated short stories, originally published in England in The Sketch during January-March 1924.  Up to this time Poirot had appeared in only two novels, The Mysterious Affair at Styles (1920) and Murder on the Links (1923), but he also had graced, I believe, 25 additional short stories in The Sketch, from March 7 through October 31, 1923.  With all the effort Christie was putting into Poirot short stories, I suppose it's not surprising that another Poirot novel did not appear until 1926, with the landmark The Murder of Roger Ackroyd.

We look back today and tend to see The Big Four, with its criminal masterminds and their plot--rather vague and fantastically ludicrous--to take over the world, as a desecration of Poirot's dignity as the world's greatest detective, but Poirot did not have as much of an established reputation back in 1924, when these stories were first published.  So probably those hardy readers of The Sketch back in the day were not mortified to see Poirot battling to the death a fiendish Chinese mastermind and a rapacious American business tycoon, among other villains.  (Hmm, how much have these stereotypes changed today?)

The biggest selling British crime writers of the Twenties were not women detective novelists like Agatha Christie and Dorothy L. Sayers but male thriller authors Edgar Wallace, Sapper and Sax Rohmer, among others.

So it's really not surprising that Christie, as she struggled to get her footing in the mystery world in the Twenties, published quite a lot of stuff in the thriller category.  She had shown she had the stuff of world class detective story writer, but she hadn't consistently developed her powers as a writer of detection.

During that decade there were, aside from the Poirot "Big Four" stories and novel, the thriller novels The Secret Adversary, The Man in the Brown Suit, The Secret of Chimneys and The Seven Dials Mystery.  Even the Poirot novels Murder on the Links and The Mystery of the Blue Train have some "exotic" thriller elements in them.  (Of course both are set in France, to Englishmen and women of that day the premier country of illicit thrills.)  Really I think most Christie fans would admit that there are really only two "classic" Christie detective novels from this period, Styles and Ackroyd.

In the Thirties, when Christie had hit her stride, it is astonishingly different.  Among the seventeen mystery novels she published in her greatest decade, starting with the first Miss Marple novel, The Murder at the Vicarage, in 1930 and culminating with possibly the greatest mystery novel of all time, And Then There Were None, in 1939, there is only one thrillerish novel, a nonseries one, Why Didn't They Ask Evans?  (Some people view And Then There Were None as a thriller story. but, if it is, it's a deadly serious one, with none of the juvenile antics of her Twenties thrillers.  I'd say it's more a noirish crime novel.)

So, really, it's not so surprising to me that Christie would decide to stick Poirot and his dogsbody Arthur Hastings into a Sapperesque/Rohmeresque global conspiracy thriller, at least in a group of short stories in the 1920s.

Probably The Big Four would not have been published as a novel at all had Christie not been demoralized by the collapse of her marriage with Archie Christie and the death of her mother.  It was Archie's brother, Campbell, who suggested to his sister-in-law that she publish the stories as a novel and who helped her to pull them together into a (semi) coherent whole.

All this being as it may, however, it must still be admitted that it just doesn't feel right for Poirot to be in this sort of novel.  Tommy and Tuppence are right at home in this sort of world, but not our Poirot of the little grey cells.  (Hastings, now, as the stolid British sidekick fits right in.)

Personally, I've never been able much to abide Sapper, though I think Edgar Wallace is underrated and that Sax Rohmer is actually quite an adept writer of shockers, if you can get past his frequent use of the "Yellow Peril" trope.  However, looked at on their face, these Twenties thrillers are simply, well, silly. Silly fun, if you are so inclined, but still silly.  (The impressive thing about Sax Rohmer, I find, is that he makes us take the nonsense seriously at the time.)  And, if you are an admirer of Poirot's brilliant deductive feats, Poirot is not silly, his overweening vanity, outsized mustaches and egg-shaped head notwithstanding.

When a television film version of The Big Four was made eight years ago, the makers jettisoned the whole international conspiracy element and this time you have to sympathize with them.  What else could they have done?

BUT, if you can go back and read The Big Four and try to see it in the context of its time and place and judge it on its own terms, it's...

Not actually that bad?

So in the novel it's June and Hastings has returned to England from Argentina where he settled on a cattle ranch with the wife (he calls her Cinderella, ugh, I forgot that), whom he married after the events in Murder on the Links, to visit his dear friend Poirot.  He soon becomes enmeshed, over the next year (!),  in Poirot's battle against a global conspiracy of four individuals to take over the world by unleashing anarchy in the streets and then picking up the pieces--or something.

This "Big Four" is composed of

Chinese mastermind Li Chang Yen, a blatant ripoff of Sax Rohmer's Dr. Fu-Manchu, who appeared in three popular novels in the 1910s.  (Oddly the bad doctor vanished in the Twenties, but he would headline six Rohmer novels between 1931 and 1941, as well as three more between 1948 and 1959, the year of the author's death.)

An American millionaire.  (You know how insidious they can be.)

And an Unknown, who's quaint nickname is the Destroyer.  (Such drama queens, these guys.)

Poirot can't get authorities to credit his outlandish notion.  Sure, on hand there's old Inspector Japp, who steadily calls Poirot Moosior.  (How is that even pronounced?  Poor Japp!)

However, Japp is even more hopeless than Hastings, who for much of the book seemingly is left in it all alone with the great Belgian detective in combatting the forces of global anarchy and mishap.  Cinderella, left sitting home in the Argentine for a year, must be an incredibly patient woman to let her husband traipse off for a whole year to fight criminal masterminds with Poirot--or perhaps she was glad to get Hastings out of the picture!

For much of the book there are feints and jabs between the Big Four and the Decidedly Mixed Two (the Dazzling One and the Dim One).  Poirot gets captured, bound and gagged twice, Hastings thrice (he finally excels Poirot at something in these books), while Cinderella is menaced by "Chinese devils" ("Remember the price of failure....your wife dies by the Seventy lingering Deaths!"), yet somehow they all escape unscathed time and again.

Personally I found the "Big Four" kind of incompetent in this regard.  Perhaps they should have emulated contemporary American gangsters and just machine gunned Poirot and Hastings as they exited Poirot's apartment building?  There's something to be said for good old American efficiency!

By the way, Poirot's address is 14 Farraway Street here; when did he move into Whitehaven Mansions?  He's also has a landlady named Mrs. Pearson, which is not the only thing therein which reminded my of the world of 221b Baker Street. 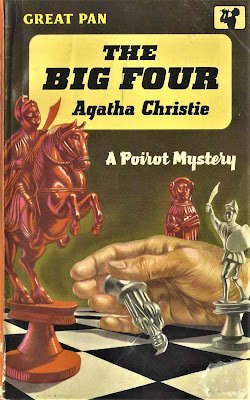 Embedded within this farrago of nonsense, however, are a few nice little cases of detection.  One of them has been anthologized separately on occasion, under the title "A Chess Problem."  In it Poirot investigates the death from heart failure of a brilliant young American chess player during a match.  But there are two other clever little stories, or episodes, in the book as well.

The first could be anthologized, after tweaking, as "The Murder at Granite Bungalow" and the second as "The Yellow Jasmine Mystery."  The first concerns the case of jade collector Jonathan Whalley at the Dartmoor village of Hoppaton, who was found dead at his home with his throat cut.  His manservant, an ex-con, has been arrested, but Poirot has other notions of culpritude.

This is an enjoyable little affair with more than an echo of G. K. Chesterton.  I almost thought for a few minutes that it was going to anticipate a famous story by Roald Dahl, but alas no.

The other "story," the yellow jasmine one, concerns the death of retired globetrotter Mr. Paynter at his small place in Worcestershire, near the village of Market Handford, where he lived with his nephew, Geoffrey, and his Chinese manservant, Ah Ling.  The elder Paynter was discovered in his study, fallen forward into the gas fire, his face charred beyond recognition.  Then there's the matter of the master's poisoned curry and his dying message about "yellow jasmine"....

It all finally works up, in rather an abrupt fashion, to Poirot's and Hastings' showdown with the Big Four at their mountain fastness in the Dolomites, oddly reminiscent of Adolf Hitler's kehlsteinhaus.  Christie was obviously inspired by the Master's Sherlock Holmes short stories "The Final Problem" and "The Empty House," but she comes up with some amusing, if outlandish wrinkles, on them. 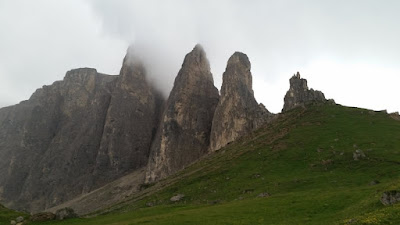 Speaking of the Sherlock Holmes connection, I should mention that Poirot's own Irene Adler, the Russian jewel thief Countess Vera Rossakoff, pops up a couple of times in The Big Four.  I hadn't even remembered that she appeared in this.  I think that gives her three appearances in all in the Poirot canon, here, originally in 1924, in the short story "Double Sin," originally published in 1923, and then finally in "The Capture of Cerberus," which first appeared, in the version with Vera Rossakoff, in 1947 in the collection The Labours of Hercules (the original 1940 version of the story having been rejected and subsequently gone unpublished).  It's nice to see the character again, although I have to say I think the Countess has made some despicable crime career decisions here!

All in all I would sooner read The Big Four again than Elephants Can Remember, the last Poirot mystery Agatha Christie wrote, nearly a half century after The Big Four.  And, really, is the concept of the "Big Four" any more ridiculous than "Q"?  Grand conspiracy theories may be absurd, but seemingly they will always claim a following among the more credulous members of the credulous human race, so naturally crime fiction will make use of them.  As long as the tongue is kept in cheek, I don't see harm in it.  So consider The Big Four underrated.

Posted by The Passing Tramp at 8:20 PM