O Rose, thou art sick: This Sweet Sickness (1960), by Patricia Highsmith--Part One, The Attraction of Murder

Patricia Highsmithiana just rolls on and on, nearly thirty years after the author's death.  2021 was the centenary of the native Texan's birth and the year saw the publication of both another biography of her (the third) and, just mere months ago, a massive tome collecting many of the thoughts that she recorded in her diaries and notebooks.  Very few vintage twentieth-century crime writers--Christie, Sayers, Simenon, Chandler, Hammett among them--get the attention which Highsmith does. 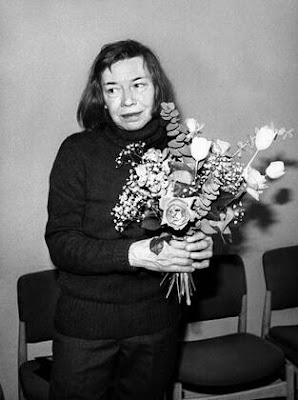 Does she deserve it?  You bet your blunt instrument!  She's one of the genre greats, even if a lot of people who read her, like some of the Simenon folks, turn up their noses at the thought of reading mysteries or even "crime fiction" in general.  Highsmith "transcended the genre," don't you know.  Well, actually she really did, but many of her works, long and short, still can legitimately be read as crime fiction.

I thought about posting a review of Highsmith's novel This Sweet Sickness for Valentine's Day, but then decided that's just too cruelly ironic, even for a crime fiction blog.  Highsmith's novel is a testament to how love--obsessive love--destroys.

One thing the bios and, more recently, the author's diaries/notebooks have made clear is how much Highsmith as an author drew on her life--both real and fantasy--in her writing.  Like Cornell Woolrich, about whom I wrote over at Crimereads a few weeks ago--she wrote what she knew; and what she knew was, all too frequently, positively gloomy.

I hate to agree with the proposition that you have to be a miserable person to write such work, but, it sure doesn't hurt.  Well, it hurts the author and the people around him/her, but it doesn't hurt their work, unless their personal misery finally undermines their ability to work, or even to go on living.  Work, according to one of Highsmith's friends (and she did have them), was her salvation; otherwise, this person avowed, the author would have ended up in a psycho ward or inebriates' home.

Many fans of classic crime fiction, particularly of the cozier sort, can't stand Highsmith.  They find her so unpleasant.  They like reading about murders, just not the unpleasant ones.  I know the feeling, to be sure.  I have difficulty with Jim Thompson, for example.  I have no desire ever to read The Killer Inside Me again.  I'm kind of sorry I read it the first time.

Nevertheless, I have become rather catholic in my taste in murder.  I enjoy both Patricia Wentworth and Patricia Highsmith and I think both of them were great at what they did.

And let's be honest.  You don't have to be a Patricia Highsmith to have dark thoughts.  Okay, Highsmith's thoughts doubtlessly were darker than most, but she removed any doubt about the matter by setting them down.  If she were still around today, alive and tweeting, she doubtlessly would have been "canceled."

This is the woman who wrote in 1971, for example, when she was fifty years old:

One situation--maybe one alone--could drive me to murder: family life; togetherness. I'd strike a blow in anger, and kill, probably, a child aged two to eight.  Those over eight would take two blows to kill.

Brrr!  Good thing she never had children.  But then I'm reminded of how John Street (aka John Rhode and Miles Burton) spent time in his backyard stabbing potatoes with razors in order to see whether Constance Kent could really have murdered her half-brother the way she said she did.  Indeed, Street spent a great deal of time thinking of creative ways to kill people.  Did he ever think about his insane first wife, who made his life a living hell for a time, when he was doing his murders?

What motivated Gladys Mitchell, for that matter, to write a jolly mystery about a disjointed body in a butcher shop?  Why did she find that amusing?  What about the one she did with the head in the pot, which draws on the career of the Butcher of Hanover?  What is the deal with her and body parts?

Even mild-mannered Freeman Wills Crofts, the sweetest of men who would have given you the shirt off his back had you needed it, spent an inordinate amount of time ingeniously bumping people off in his fiction--though as a evangelically-minded Christian, he always piously made sure that we knew that those murders didn't pay in the end.  (Murderers make mistakes, don't you know--at least we sure hope so!)

My point is that maybe classic mystery isn't as far removed from the world of noirists like Highsmith and Woolrich as we tend to think.  Keep that in mind in the next post when I look at the tormented Miss Highsmith and her Sweet Sickness.