Miss Fenwick Returns: Elizabeth Fenwick's Crime Novels Are Coming Back in Print after Nearly Half a Century 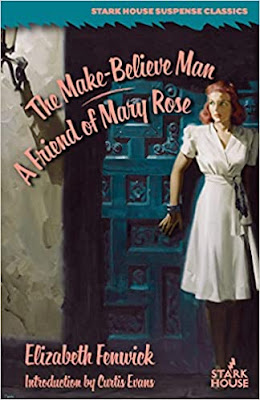 Over her life Elizabeth Fenwick (1916-1996), whose real name was the somewhat more prosaic Elizabeth Jane Phillips, published fourteen detective and crime novels and three mainstream novels, which I will list farther down the page.  (There are usually some errors on the publication years.)

After publishing a trio of wartime detective novels as E. P. (presumably Elizabeth Phillips) Fenwick and a trio of postwar mainstream novels as Elizabeth Fenwick, the author published in 1957 Poor Harriet, her first novel of "domestic suspense" (her own term for it, interestingly enough, was "domestic unease").  Ten more suspense novels followed, the last of these being The Last of Lysandra in 1973.  Here is the list:

The Inconvenient Corpse 1943 (as EP Fenwick) 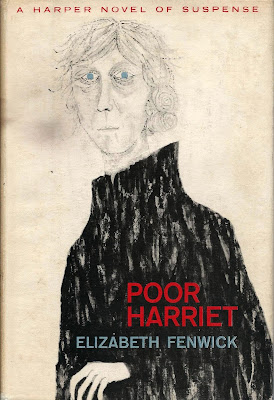 I first starting writing about Elizabeth Fenwick back in April 2015, when I reviewed her debut suspense novel Poor Harriet (1957), surely one of the best-received "debuts" in American crime fiction.  I say debut because most people had forgotten about E. P. Fenwick, longtime Fenwick fan Anthony Boucher excepted.  Indeed, Boucher had compared the early Fenwick detective novels, when he reviewed them at the San Francisco Chronicle, to the work of Elisabeth Sanxay Holding.

Now posted with the New York Times, Boucher called Poor Harriet "the work of a highly skilled novelist."  And indeed it was.

Fenwick's first mainstream novel, the semi-autobiographical The Long Wing, had received a great deal of praise from critics and led to her being invited in 1948 to spend a summer at the Yaddo artists' retreat in upstate New York to work on her second novel.

This was the same summer Patricia Highsmith, Chester Himes and Flannery O'Connor were there.  O'Connor, who became one of the great 20th century southern regional writers, was at Yaddo the longest of these individuals, I believe, and encountered all of them, with varying reactions.  While O'Connor and Highsmith decidedly did not get along (Highsmith was quite contemptuously explicit about this), O'Connor and Fenwick became good friends up through O'Connor's early death in 1964.  After being diagnosed with lupus, O'Connor retired to live on a farm in Georgia, but the two women regularly corresponded.  O'Connor always referred warmly to her friend as "Miss Fenwick."

Fenwick had a knack for getting into the company of great writers.  When she lived in St. Louis, Missouri in the 1930s, where she was working as a secretary, she became a member of a Washington University poetry circle which included among its members the future famed playwright Tennessee Williams and her own future husband, modernist poet Clark Mills McBurney.  Unfortunately Williams didn't remember Fenwick later in life, mentioning merely that the group had some pretty female members, all of them from good families, who provided excellent comestibles and decorations.  Yes, the snobbery and sexism comes through loud and clear.

Williams aside, the admittedly quite attractive Fenwick, now in her forties, quickly established herself after 1957 as one of the mid-century's most noted domestic suspense novelists, along with such greats as Margaret Millar, Celia Fremlin, Shelley Smith, Charlotte Armstrong, Ursula Curtiss, Jean Potts and Dolores Hitchens.  Her strength as a pure novelist proved both a positive and a negative for her as a crime writer, however, in terms of popularity, I believe, with some her books being too subtle, perhaps, for the American market. 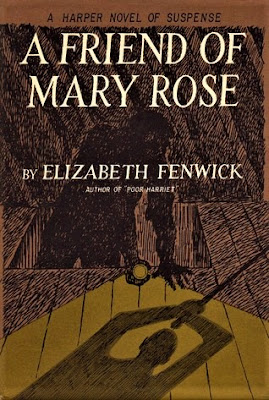 Despite these misses, Fenwick probably achieved her height of popularity in the U. S. with the early Sixties publications of A Friend of Mary Rose and The Make-Believe Man, both of which, I'm happy to say, are being reprinted this year by Stark House, with a long introduction on Fenwick's life by me.  (There will also be a piece on Crimereads.)

It was at this point that Anthony Boucher referred to Fenwick as a generally recognized equal of Shelley Smith and Celia Fremlin.  (In 1966, however, when she had not published a novel in the U. S. for four years, he pronounced that she was underappreciated.)

Mary Rose is about an 83-year-old man named Mr. John Nicholas who through a strange twist of fate finds himself becoming the protector of an eleven-year-old "tomboy" menaced by a violent man with the most malign of designs upon her.  It's true there have been other blind sleuths in fiction, like Ernest Bramah's Max Carrados, but as far as I'm aware they have all been some variation of great detectives.  Mr. Nicholas, in contrast, is just a regular man, who suffers the indignities of the aged and infirm like everyone else of his sort.  Realism is a hallmark of this and other Fenwick novels, as is a sympathetic understanding of the problems everyday human beings. 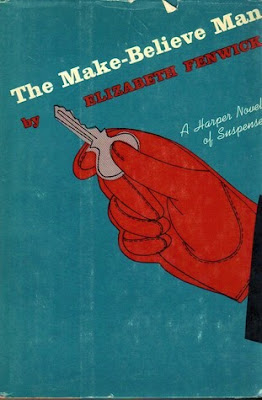 The Make-Believe Man concerns a recently-widowed woman, Norma Hovic, who has returned with her eleven-year-old son to Detroit to live at her old home with her mother.  When her mother leaves to stay with Norma's "expecting" sister and her family in another town, Norma is pleased to have the house to herself and her son for a while.  But then her mother's former roomer, a nice young man named Cliff whom Norma displaced when she returned home, shows up at the door....

This is a sort of psychological home invasion story with many twists and turns and another appealing everyday protagonist and like Mary Rose it was highly praised on both sides of the Atlantic.

Both novels have as well, I should add, very well-conveyed children, both of them eleven years old, around the same age as the author's own daughter, Deborah, who herself was about eleven when Mary Rose was published.

Fenwick was very close to her daughter from her second marriage, all the more so because both of her marriages can fairly be termed disasters and Deborah was all she had out of them.  Fenwick was apparently married to Clark Mills McBurney for five years, between 1941-46.  He went away to serve in the Second World War and just stopped communicating with her after a time, forcing her to get the marriage annulled.  As far as I know, she never saw him again.  Classy, Clark!

Fenwick stayed married to her second husband, small publisher David Jacques Way, for sixteen years, from 1950 to 1966, when he left her for a 23-year-old graphic designer in his company, just few years older than his own daughter.

What makes this even more deplorable is that over the duration of the marriage he had been a rageful and violent husband, whom Elizabeth herself had wanted to leave with her daughter but couldn't, she felt, because she did not make a enough money from her writing to support them.  She only earned about $20,000 a year from her books (in modern value) and her husband, she feared, would not have been a reliable provider of alimony and child support if they parted.

Certainly Fenwick's is a striking testament to the financial insecurity of writers, even critically-esteemed ones, which perhaps may surprise some people.

I write about all this in greater detail in my introduction.  I found Elizabeth Fenwick's life really fascinating because even though she was a much-praised writer she herself faced a lot of problems which domestic suspense authors wrote about in their books, in terms of her relationships with men.

Fenwick's life also illustrates how callous and dismissive even the ostensibly "enlightened" intellectual males of the era could be, in regard to women.  Even Tennessee Williams, who had no interest in women sexually, comes off as rather an ass.  I was somewhat reminded of the domestic situation of Shirley Jackson, a writer Fenwick somewhat resembled, especially in her 1962 novel The Silent Cousin, inexplicably turned down by her American publisher, about which I will be blogging next, I think.  See you again soon.

Posted by The Passing Tramp at 2:43 PM