Elizabeth Fenwick has written four thrillers since her first, Poor Harriet, marked her as one of the most promising newcomers of 1958.  Her careful technique and her ability to arouse a sense of pity--rare enough among the run of thriller writers--are evident in all of them.  This, her latest, is well up to standard.  It is a family drama set in the American countryside.  Miss Fenwick takes her reader along quietly, with just hints and shadows of impending doom, and the macabre and unexpected climax hits all the harder for that.

The Silent Cousin, by Elizabeth Fenwick is a leisurely atmospheric tale of personalities, from the murderously warped to the seriously frustrated.  The scene, surprisingly, is the Hudson River Valley.  It seems like English countryside and the "goblin mansion" could have housed Charlotte Bronte.  Miss Fenwick is skillful in motivation as well as characterization and binds a fine spell.

Suspense gradually creeps in as Elizabeth Fenwick skillfully begins what at first appears to be an interesting and well-written [straight novel] about remnants of a family and their vast decaying estates.  While family relationships are somewhat complicated, what begins as simple interest gradually progresses to apprehension and then to breathless suspense which demands quite a bit of willpower not to skip ahead to end the anxiety.

Elizabeth Fenwick's The Silent Cousin was published during the mid-twentieth century (1962 in the U. K., 1966 in the U. S.), but it takes place on a grand Hudson Valley, New York estate constructed during the American Gilded Age--a grand setting for a tale which harks back to the Gothic tradition in mystery literature.

There are at least four houses on the estate: the massive Long Acre, where no one actually lives; the Hall, where reside the remnants of the Onderdonk family; the farmhouse, home of the Onderdonk estate manager MacDonald and his family; and, lastly, a cottage which serves as the dwelling of an Onderdonk demi-relation, Professor Paul Potter, when he visits the estate in the summer, on vacation from his university post in Indiana.

I greatly enjoyed this novel, but I will admit it needed a family tree, so here 'tis (I made it out in my copy at the heading of Chapter Five; starred characters are still alive--for the moment--when the novel opens):

Grandfather Onderdonk, who built Long Acre in the 1890s and with his wife Millicent I, had three children:

Millicent 2, the second wife of Paul Potter's father and the stepmother to

*Paul "Polly" Potter (36), who married *Vinnie, from whom he is estranged when the novel begins, and produced a daughter

*Cressa (8), who comes to visit him at the Estate

*Humphrey Onderdonk who married *Cora and had two daughters, both of whom are unmarried

*John Onderdonk Watson (22), who comes to visit the Estate

Estate manager *MacDonald who took a wife and with her produced 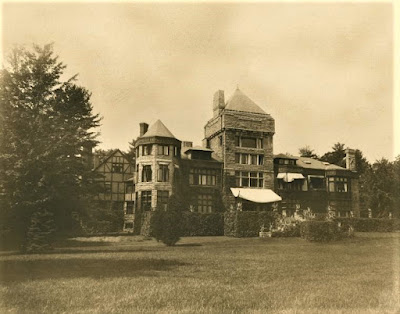 When the novel opens Paul is staying at the cottage expecting the imminent arrival of his daughter Cressa for a visit.  He learns of the sudden demise of Mrs. MacDonald, a death which was unexpected, though the woman had been ailing.

Soon another character is found dead in the fishpond (there's a classic death for you) and we are off to the murder races!

I don't know that I would call The Silent Cousin leisurely, as it, like Fenwick's other crime novels, is quite short (about 60,000 words); but it builds subtly to a tremendous climax, giving us a chance to immerse ourselves in the characters, as seen through the eyes of the contemplative not-quite-relation Paul.

The central dramatic situation is that the family money is tied up in in a trust which keeps the estate going, but also keeps the remaining Onderdonks effectively wards of that estate.  It's rather like the situation in S. S. Van Dine's The Greene Murder Case, but the climax may remind you more of Edgar Allan Poe (a specific short story which shall go unmentioned here).

It seems obvious to me that Fenwick based the Onderdonk estate on Yaddo, the artists' retreat outside Saratoga Springs, New York, where Fenwick spent the summer of 1948 working on her second mainstream novel.  (This is where she met, and became lifelong friends with, writer Flannery O'Connor, who herself could do some mean Gothic.)

The great mansion at Yaddo was built by Spencer and Katrina Trask, an ill-starred couple who lost all four of their children at young ages so bequeathed their home to creative artists.

The name Onderdonk, I would hazard to guess, Fenwick derived from the Onderdonks of Texas, another distinguished artistic family.  Julian Onderdonk, known as the father of Texas painting, was a prominent impressionist painter who died in 1922 in San Antonio, where Elizabeth Fenwick would graduate from Jefferson High School a dozen years later.  Of course Onderdonk is a grand old Dutch name and there were Onderdonks in New York, the setting of The Silent Cousin, but I feel sure that when Fenwick wrote the novel she thought back to that Texas branch of the family.

At Jefferson Hugh School, by the way, Elizabeth Fenwick, then known as Betty Phillips, revealed an early literary bent, winning the state poetry contest two years in a row.  In high school she belonged to the Scribblers, the Poetry Club and the Quill and Scroll, the high school honors society for student journalists.  Smart girl, Betty!

This intelligence and sensitivity comes out in her novels, like The Silent Cousin, a fascinating tale of repression which in its final pages reaches a shattering crescendo of doom.  I've mentioned Van Dine and Poe and I should also mention Shirley Jackson, whose great Gothic novel We Have Always Lived in the Castle appeared the same year as The Silent Cousin was published in England.  Certainly a criminal coincidence, that!  Fenwick's Long Acre also could be said to bear some resemblance to Jackson's Hill House, from another of her novels.

There's also a clever reference to a certain Dorothy L. Sayers detective novel, but I'll leave you to see this for yourselves when The Silent Cousin is reprinted.

Why Harper passed on The Silent Cousin is beyond me, unless it was too slow burning for editor Joan Kahn, who was known to be quite cutting in her judgments.  (She also gave fits to Patricia Highsmith, who eventually left Harper in a huff.)

Cousin finally appeared four years later in the U. S. with Atheneum, who also published Eric Ambler and P. M. Hubbard, another great exponent of unease whom Fenwick bears some resemblance to as well.  Personally I think Joan Kahn's pass on The Silent Cousin reflects much worse on her than Fenwick.

And I will say that out loud! 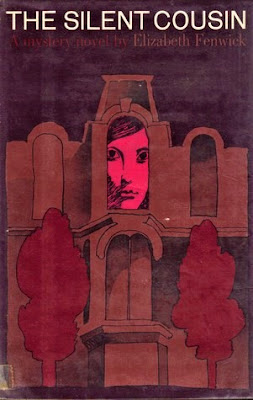