Detecting in the Seventies/Heroes: The Snatch (1971), by Bill Pronzini and Edwin of the Iron Shoes (1977), by Marcia Muller

When I was a kid

I thought I'd save the world

Running round and chasing all the criminals....

Well everybody needs a hero

But I'm not everybody else

You know I tried to be a hero

But I was lying to myself

It's not that I don't love to solve a mystery

But life is hard enough with one identity....

At the end of 2020 I had this notion of doing a retrospective series of reviews on mysteries from the Seventies, the earlier ones from that decade being, amazingly to me, a half-century old now.  Having been born as a Gen X'er in the Sixties, that makes me feel really old!  It was in the Seventies that I first started reading mysteries (or, heck, reading, period), beginning with Agatha Christie in those old Pocket paperback editions.  A bit later came Sherlock Holmes.

So how do the Seventies fit into the history of mystery fiction?  It's an important decade for classical detective fiction, to be sure, because it's the decade when practically all of the remaining "Golden Agers" expired, including some of the biggest names in the field, like Christie herself, John Dickson Carr, Erle Stanley Gardner, half of Ellery Queen and Rex Stout.  But it's also a decade when new names like Peter Lovesey were entering the field, and relatively new names like PD James were getting more established.  I evaluated works from the time by Catherine Aird, Patricia Moyes and Ruth Rendell, before my thoughts were distracted, predictably enough, by other projects.

I was inspired by the Rolling Stones' rock album Sucking in the Seventies, but I didn't want the series to carry the connotation that these books "sucked," so I am now using the title Detecting in the Seventies.  Now, let's get on with it!

Of course there was much more to the Seventies than classic mystery; indeed, in the Seventies some proclaimed that classic detective fiction was actually dying, even gasping on its deathbed.

How about classic hard-boiled PI crime fiction--you know, tough gumshoes with their bottles and their broads--how was that going?  Raymond Chandler had died in 1959 and Dashiell Hammett in 1961 (and Hammett had been creatively dead long before that) and in the early Seventies they had not yet posthumously accomplished their great commercial and critical renaissance.  Hard-boiled mystery was deemed an anachronism.

Leigh Brackett, a co-scripter of the seminal (if overrated in my book) hard-boiled film The Big Sleep (1946), based on Chandler's debut 1941 crime novel of the same, was called upon to script the 1973 film version of Chandler's penultimate crime novel, The Long Goodbye (1954).  She later reflected that "time had gone by...the private eye had become a cliché":

Legions of private eyes had been beaten up in innumerable alleys by armies of interchangeable hoods.  Everything that was fresh and exciting about Philip Marlowe in the Forties had become cliché, outworn by imitation and overuse.  The tough loner with the sardonic tongue and the cast-iron gut had become a caricature....the idiom had changed.

So what was a neophyte writer of private investigator novels to do as the jaded Swinging Seventies shimmied into the dawn?  Let's look at the then very young Bill Pronzini, today still an active writer, indeed one of the most prolific such in the genre.  At the age of 24 Pronzini published his first short crime story in Alfred Hitchcock's Mystery Magazine, "The Running Man."  This was the first of a dozen works by him to appear in AHMM between 1968 and 1971.

The El Paso Times pronounced that latter year that the "ruggedly handsome Bill Pronzini" had sold over 80 short stories in a wide variety of fields since he started professionally writing in 1966.

1971 also saw Pronzini publish his first two crime novels: the Edgar-nominated The Stalker and The Snatch, the first of his long series of "Nameless" PI tales, which eventually totaled to over forty novels between 1971 and 2017, as well as several novellas.

Set like the other Nameless novels in California, Pronzini's own native state, The Snatch was praised by none other than Jacques Barzun (no noted hard-boiled fan himself), who in A Catalogue of Crime wrote: "Here Pronzini has done a fine job of adding something new to the nearly worn-out kidnapping ploy.  The twist at the end is masterly, and not unclued."  High praise from our good Professor B!

People who have read some of the later Nameless novels may be in for a bit of a surprise with The Snatch.  For one thing, Nameless is old!  He is stated flat out in this one to have attained the age of 47, meaning he was born around 1923.  Not surprisingly, given that natal year, he's a veteran of World War Two.  He also was a cop for fifteen years before becoming a private eye.

Now he's got a girlfriend, an attractive, younger double divorcee named Erika, who affectionately calls him "Old Bear" but hates his job like poison.  That's bad by itself, not to mention he suffers from a hacking smoker's cough that could be an indication of something worse, like cancer--though he can't bring himself either to quit smoking or to see a doctor.

All in all he's rather a depressed guy.  (We don't learn his name here, hence he's "Nameless.")  The greatest pleasure which he seems to derive comes from collecting old pulp magazines detailing the bare-knuckled adventures of the steely-eyed, heroic private dicks he grew up reading as a kid.  Down those mean streets Nameless needs must go, though he doesn't feel that he lives up to his fictional forbears.  But all a man can do is try. 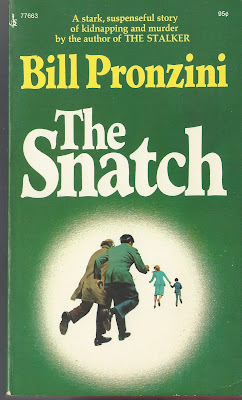 In The Snatch Nameless is hired by Louis Martinetti, a financial consultant in the wealthy enclave of Hillsborough, seventeen miles south of San Francisco, to make a drop of money to ransom Martinetti's kidnapped son.  Nameless does so--and almost dies in the process.  Things gets more involved from there.

As Jacques Barzun stated, Pronzini comes up with a welcome new wrinkle on the snatch plot and it's very nicely clued, with some Carrian/Brandian finesse.  By my count the book is only around 54,000 words, Pronzini being a master of the art of the short crime novel--they way God intended it, in my opinion.

Steeped in pulp crime fiction tradition, Pronzini is fully conversant with the mythos of the "hard-boiled" American private eye which by 1971 which had been built up over the last half-century from its origins in Black Mask in the early Twenties.  Nameless loves the pulps, but he isn't a tough guy, he isn't hard-boiled, his isn't a wisecracker, he's just a (rather morose) middle-aged guy trying to do right in a world of myriad wrongs and much human hurt.

Sure he won't mow down fifty people like Hammett's "realistic" Continental Op and his fraternity might, but he still just might crack a case and even save some poor soul.  As he says near the end of the novel, mentally addressing Erika, his now ex-girlfriend:

You said that I'm nothing more than a little boy playing at being a detective, that I'm living in the past, in a world that never existed.  But the world I live in, you live in...is...a lousy world that requires men...to keep it from becoming sicker and harsher and crueler than it already is, dedicated men...men who care.  I'm one of those men...and because I am, I'm not living the lie you think I am.

Shorn of the grandiose, tough guy bravado of the shoot-'em-up pulps, it's a more believable and arguably compelling picture, at least for me.

In the Seventies and Eighties the ranks of the PI's would see female entrants too, like Sharon McCone, created by Bill Pronzini's future spouse, crime writer Marcia Muller.

It was no longer just a man's world!  I will be looking at her first detecting saga, Edwin of the Iron Shoes (1977), next.

Note: If any of my readers are Weezer fans, they will know that the lines from their song "Hero" quoted at the top of the piece refer to superheroes, not gumshoes.  But to the those kids reading the pulps in the Twenties, Thirties and Forties, those daring crime-busting dicks in trench coats and fedoras were superheroes of another sort.  Down those mean streets....

Posted by The Passing Tramp at 3:53 PM