Watching Poirot Season 3 on the new remastered Acorn set I was rather struck by the more serious tone of a number of the episodes. Of course, if one looks back to Season 2, in only three of the nine episodes (counting Peril at End House as one episode) is Poirot called on to solve actual murders. Conversely, in Season 3 Poirot confronts foul play in seven of the ten episodes (counting The Mysterious Affair at Styles as one one episode) and is tasked with preventing a murder from being committed in another.

In my memory I recalled most of the earlier Poirot episodes as delightful Art Deco trifles, but some of the Season 3 episodes have surprisingly dark elements.

Just as Season 2 opens with an adaptation of a full-length Christie novel, the splendid Peril at End House, so does Season 3, with The Mysterious Affair at Styles.  Although Styles is an enjoyable presentation, I don't believe it matches Peril, perhaps for reasons that have more to do with the source material than with anything the adapters did or did not do.

To be sure, Styles has a lot of period appeal.  It is dated to 1917 (it was in fact Christie's first Poirot novel, written during World War One and published in 1920) and for once we are not bedazzled with the glories of Art Deco design.


Rather than the Jazz Age, the film recalls the Edwardian era (technically ended with King Edward VII's death in 1910).  Despite the world conflict (we know there is a conflict because Poirot is one of a number of Belgian war refugees, Hastings has a wound of some sort and is suffering somewhat from shell shock, and the genteel ladies occasionally mention war work between bouts of lawn tennis), there seems to be ample time for the Inglethorp/Cavendish clan--mother Mary (recently remarried, to mysterious Alfred Inglethorp), sons John and Lawrence, daughter-in-law Mary (John's wife), poor relation Cynthia and companion Evie Howard--to take leisurely nibbles of seed cake as they sit at their lawn chairs, waited upon by adoring servants.  Indeed, we seem closer to the Victorian world of Anna Katherine Green's The Leavenworth Case (1878) than that of the Jazzy and modern Peril at End House (1932).

This golden Edwardian afterglow is extremely well-conveyed, and helps remind one just what an abrupt change the Jazz Age must have seemed at the time. And the mystery that develops when Mary Inglethorp is poisoned has interest too.  It's a nice, complex Christie plot guaranteed to keep the little grey cells clicking (or whatever it is that grey cells do exactly)--though the basic gambit, I would argue, works better on the page than on the screen (at least it does with this group of actors).

My biggest criticism of Styles is that it feels a bit dramatically inert, but I would say this is probably true of the book as well.  Japp doesn't get to do much of interest here, and the various suspects are rather a dull lot on the whole, I think (though I loved Michael Cronin as the sinister Alfred Inglethorp; he looked like the Fabian Socialist Sidney Webb).  All in all, this is a very traditional mystery affair, with a country house, gentry sitting around waiting to inherit from the person with all the money and order restored at the end by the Great Detective--but I thought it just a wee bit dull.

On the other hand, I think the nine short story adaptations are on the whole pretty spectacular affairs. Here are my ratings, with short commentaries.

The Mysterious Affair at Styles***
(see above)

How Does Your Garden Grow*****
Who poisoned the rich old lady in her cozy country cottage?  The niece?  The niece's ne'er-do-well, tippling husband?  The mysterious Russian companion?  A great story by Christie and fine adaptation, with a delightfully over-the-top, garden-chewing denouement.  Elements of this story popped up much later in the Poirot novel Hallowe'en Party (1969).  We will see another beautiful, mysterious Russian woman later in the season!

The Million Dollar Bond Robbery*****
I have always thought this story has a nice, tricksy theft plot, and it was smartly adapted for television here.  I love the glimpses of the banking world, and the ocean liner stuff is nicely done, considering they must have never left the studio for that part!  Hilarious observations on women from Hastings at the end. 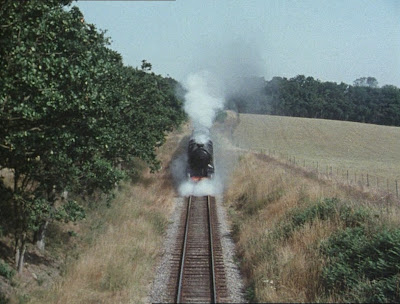 The Plymouth Express*****
This story never did much for me, though the plot is fine (Christie used it again in her novel The Mystery of the Blue Train).  I really like this adaptation, however.  It is quite impressively dark, driving home the essential squalor and depravity of murder.  Trains are always to be welcomed too, of course.

Wasps' Nest*****
A very unusual one, with Poirot not investigating a murder already committed but rather trying, he thinks, to stop one from being committed.  Another splendid small country house and garden, and a rather poignant denouement.  The "wasps nest" theme is brilliantly realized visually.  There's also a great musical theme for the glamorous model (I hadn't yet mentioned the fine scoring done in this series).

The Tragedy at Marsdon Manor******
Here we have the classic country country house setting, with a creepy ghost story as well for good measure.  What's not to like?  A clever murder with lots of clues too.  And the amusing added bit of the innkeeper who is also an aspiring mystery writer (he uses a woman's pseudonym--"they seem to sell better").  An improvement on the story, which resorts to the hackneyed word association device, as I recall.

The Double Clue****
This one introduces "The Woman"--no, not Irene Adler, but Countess Vera Rossakoff!  Poirot in love--or at least infatuated--is certainly a new wrinkle, though I'm not quite sure about the moral implications of the conclusion.

The Mystery of the Spanish Chest*****
Surely a candidate, in my view, for the best episode of the series.  One of Christie's very best murder stories, splendidly realized.  Beautifully acted (you would swear John McEnery and Pip Torrens stepped straight out of the 1930s and Caroline Langrishe is really stunning in that "English Rose" way--did anyone else think she looked like Princess Diana?).

Manages to be simultaneously brilliantly plotted and sinisterly suspenseful--a triumph from beginning to end.  Plus, some smashing fencing and Poirot dancing!

The Theft of the Royal Ruby***
The weakest one of the lot, I think, but still much better than Season 2's "The Cornish Mystery," a story that, it will be recalled, has no real ratiocination whatsoever.  "Ruby" has rather a simple plot (it's a late Christie story), and the stylish but cold Art Deco house--which we saw before in Season 2, I believe-- doesn't fit the Christmas setting.

What I liked best about this episode was Tariq Alibai's performance as the real life personage Prince Farouk, the young gentleman who foolishly lost to a "tart" the precious family ruby that Poirot is tasked by the British government with retrieving (cue the Elgarian Empire theme)--though it must be admitted the actual physical resemblance is weak.  Though some might take this character as an ethnic caricature, I think the satire is narrowly targeted at the real-life Farouk, who, it seems, may have merited it (a subject for another blog).  It would have been amusing for him to have been the "Watson" in this episode (Hastings being away) and to see Poirot getting more and more exasperated. 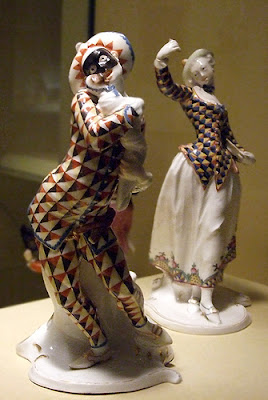 The Affair at the Victory Ball*****
Another impressive, densly-plotted murder story.  The Harlequin theme that so fascinated Christie is splendidly realized and the BBC (including a radio murder play) is neatly worked in.  Not as dazzling as "Spanish Chest" but very good indeed.

The Mystery of Hunter's Lodge****
Another nice country house murder, with a rural hunt setting and a much-hated tyrannical squire.  Guess what happens?  When Squire is shot dead, it's naturally a case for Poirot, who has caught cold and now becomes not an armchair but a sickbed detective.

This one reminded me a great deal of a Freeman Wills Crofts story, with all the emphasis on trains, alibis and suspects' movements.  The central deception is, I think, rather hard to swallow, but still it's quite an entertaining episode.