Those Meddling Kids! Nancy Drew and the Hardy Boys

The first several Nancy Drew reprints have introductions by women writers telling of Nancy Drew's influence.  I don't believe you see the same phenomenon with the Hardy Boys mysteries, leading me to believe that Nancy Drew is a more iconic figure for women than the Hardy Boys are for men.

In my own experience I owned one, just one, Hardy Boys book as a kid, The Twisted Claw (original edition, 1938), and I don't believe that I ever read it! I never checked them out from libraries either, for some reason.

My sister, on the other hand, had some dozen or so Nancy Drews, all of which she read.  I remember as a kid being fascinated with one of them, The Hidden Staircase. What young kid isn't fascinated by secret passages in old houses! My mother's very old home in Gratz, Pennsylvania had a sort of concealed staircase, which no doubt added to the book's appeal for me.

It was not until the Applewood editions began to appear when I was in graduate school that I learned that beginning in 1959 the Hardy Boys and Nancy Drew books had been heavily revised: shortened, modernized, simplified in language and shorn of racially insensitive material.

Naturally that set me off to get the facsimile editions, for I love Golden Age mysteries, as all of us here know!  I was especially spurred to get them when I found out the Hardy Boys series was specifically inspired by the huge success in the 1920s of S. S. Van Dine's Philo Vance detective novels. 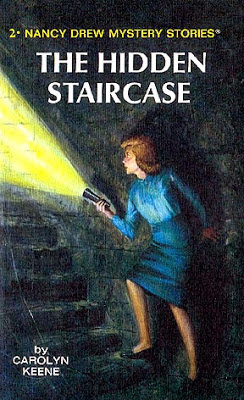 I thought it would be fun to do a blog review of one book apiece about these teen sleuths (preferably ones from the 1930s), but as a preliminary I would like to hear from readers of this blog about their experiences with Nancy Drew and the Hardy Boys.

Did you read these books when you were young (er)?  Did you read the original editions or the revised ones?  Did they get you interested in reading adult mystery fiction?  What were your favorite titles?  Do you think the originals are better than the revised versions, or vice versa?  Did you read both Nancy Drew and the Hardy Boys, or one or the other?  Has Nancy Drew had more of an impact than the Hardy Boys? It would be great to hear from you in the comments!
Posted by The Passing Tramp at 6:58 PM