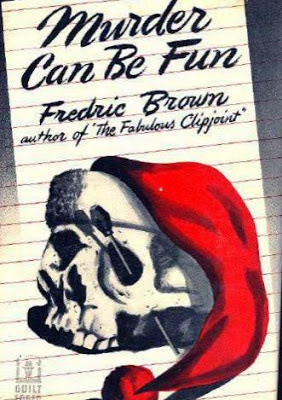 "Why, Baldy, are detective stories so popular?"
"Because people read 'em?"
"And people read them because they like them.  Because murder can be fun--if it's fictional and not factual murder."

Murder Can Be Fun (1948) is the third mystery novel by the great American mid-century crime and science fiction writer Fredric Brown (1906-1972).

The novel, which is an expansion of Brown's 1942 short story "The Santa Claus Murders," has the qualities of classic Fredric Brown: an intriguing plot, a strong setting, touches of surrealism and an astonishing amount of drinking.

If the characters in Fredric Brown novels don't quite make those in the books of Craig Rice look like amateurs at the fine art of alcohol consumption, it's not for want of trying.  Many a Fredric Brown tale, including this one, might also be tiled Murder Makes You Thirsty.

The surrealistic quality in Brown's work comes to fore immediately in Murder Can Be Fun when on a sweltering August day a Manhattan man is shot to death by a person incongruously clad in a Santa suit. Another murder follows, although this time there are no witnesses to say whether Santa was the one who dun it.

Both murders are linked to radio scripts that former-journalist-now-radio-hack Bill Tracy wrote for his proposed radio mystery series, Murder Can Be Fun. Are Bill's scripted murders coming real?!

This surrealistic element is something that Brown would develop more powerfully in the novel some people regard as his masterpiece, Night of the Jabberwock (1950).*

*(in Murder Can Be Fun, incidentally, Brown actually makes a couple references to Alice's Adventures in Wonderland/Through the Looking Glass and to animated chess pieces)

Bill's current job is writing scripts for the popular radio soap opera, Millie's Millions.  Fredric Brown's portrait of a forties radio show is for me the most appealing part of this appealing book (and probably will be to as you as well if you love old-time radio).

The author of Murder Can Be Fun doesn't think too much of radio soap opera:

In moments of fairness, [Bill] would admit that the formula the soap operas used was the basic formula of all great literature.  The only difference, really, between Millie's Millions and, say, the Odyssey of Homer was that Ulysses suffered for a limited time only, whereas Millie went on forever, because her public demanded that they should. She couldn't get married happily and settle down, nor yet could she die and get her troubles over with.  That, of course, is the real reason why the radio serial must become a bane to the discriminating ear; instead of being a story with a beginning and an end, it goes on and on until it becomes a palpable and palpitating absurdity.

"[A] ghastly travesty of life," Brown terms radio soap opera (even more horribly, today we have "reality" television, which actually claims to be real life). 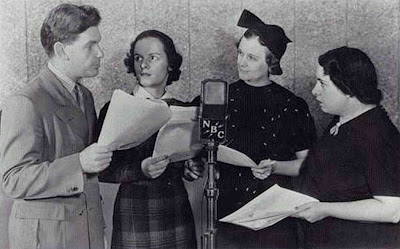 Of course in Murder Can Be Fun there's a mystery to be solved and there's a nice fair play puzzle embedded in the text.  There's also a winsome little romantic subplot, involving Bill with two fetching ladies, next door neighbor Millie (a hosiery model, not the Millie of Millie's Millions) and the lovely and ambitious blonde stenographer, Dotty. In fact Murder Can Be Fun could almost be called a cozy of sorts (a cocktail cozy, if you will)--though I wasn't altogether sure that that last line bode all that well for Bill!  Read it and see for yourself.  It's a swell mystery tale.
Posted by The Passing Tramp at 3:04 AM