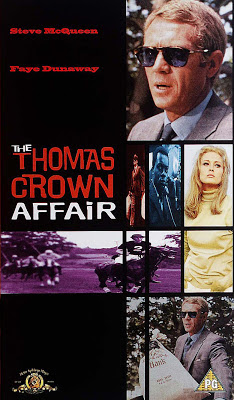 This 1968 caper film starring Steve McQueen and Faye Dunaway and directed by Norman Jewison (who previously directed Steve McQueen in his 1965 poker film, The Cincinnati Kid) is short on substance but long on style and star appeal, in the manner of such earlier sixties crime flicks as Charade (1963), Arabesque (1966) and How to Steal a Million (1966).

Some people have complained that there was too much plot in Steve McQueen's other 1968 crime film, the mega-hit Bullitt, but arguably The Thomas Crown Affair is too short on plot (Alan Trustman wrote The Thomas Crown Affair screenplay and co-adapted the screenplay of Bullitt).  There's about enough plot in the film for a Mission Impossible television episode, though it's padded with some pretty stuff.

The Thomas Crown Affair received Oscar nominations for best score and best song, winning an Oscar in the latter category, for the hit song "The Windmills of Your Mind."  I was only two years old when this film opened at the box office, but even I somehow knew the lyric "Like the circles that you find/In the windmills of your mind"--I think due to a bit on The Carol Burnett Show in the 1970s!


Somehow the film missed a nomination for best costume design, surely a disappointment for whoever designed the seemingly endless succession of sixties-chic outfits that a stunning-looking Faye Dunaway wears during her single hour of screen time (over a half-hour elapses before she appears).


Steve McQueen, looking blonder than ever and altogether quite natty in his various three-piece suits, must have had a lot of fun playing Thomas Crown, a millionaire undergoing something of an existential crisis (he organizes bank robberies because he's bored, you see, conveniently leaving insurance companies--hiss!--to pick up the tab).


As Crown, McQueen gets to sleep with both Astrid Heeren (wow!) and Faye Dunaway, fly a glider--well, he didn't actually fly the glider himself, as I understand it, and I don't know whether or not he really slept with his attractive female co-stars, but this seems to have happened with some frequency over McQueen's career--smoke cigars, play polo, drive a dune buggy and just look all round darn cool in general.


There is a neat bank heist at the beginning of the film that is quite effectively filmed (much use is made of split screen images). One of Crown's crooks is the fine African-American actor Yaphet Kotto, making one of his earliest appearances, and another is the great, late character actor Jack Weston.


The police are stymied, naturally, but once Vicki Anderson, impossibly stylish insurance investigator, shows up she is soon hot on Crown's trail. She makes some nice deductions here, but also some absurdly casual intuitions (she immediately eliminates one possible suspect because he's too "square" looking to be a clever criminal).


But who am I kidding?  People surely went to see this film to enjoy watching two beautiful people romance each other in beautiful locations surrounded by beautiful things; and here the film does not disappoint.  As the smart and determined Vicki Anderson starts to fall for the debonair and enigmatic Thomas Crown, will she allow her career ambitions to triumph over love?  Or will Thomas Crown get the last laugh on the law?


Well, I won't tell! See this original version of The Thomas Crown Affair for yourself, if you haven't already, even if you've seen the more recent remake.  That sixties style is hard to match today.
Posted by The Passing Tramp at 2:09 AM