Here is the dust jacket to the American edition of Annie Haynes' Who Killed Charmian Karslake? (1930), recently reviewed here. 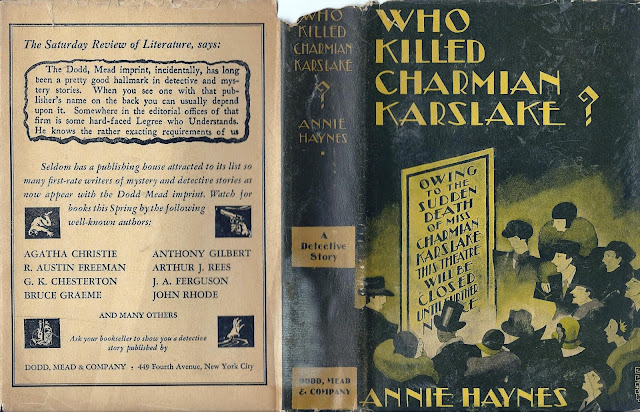 On the back panel of the jacket Dodd, Mead urges its readers to

Watch for books this Spring by the following well-known authors:

How many of these authors have you read?  It's interesting that not one is American (all are British).  And only two women (yes, one of the "men" was a woman who used a male pseudonym).  Dodd, Mead did not have much in the way of American series mystery authors at the time (though there was Charles J. Dutton, reviewed by blogger John Norris here, a certain individual named Sinclair Gluck, and a new Dodd, Mead writer named Carl Clausen, who though born in Denmark, lived in the United States). 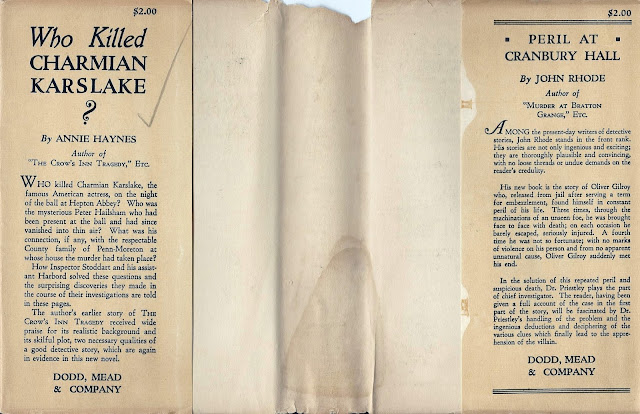 On the front flap, Haynes' earlier The Crow's Inn Tragedy is praised "for its realistic background and its skillful plot, two necessary qualities of a good detective story."  On the back flap John Rhode's (John Street's) Peril at Cranbury Hall is blurbed.  "Among the present-day writers of detective stories," declares Dodd, Mead, "John Rhode stands in the front rank."

In Masters of the "Humdrum" Mystery, I write about John Street's relationship with Dodd, Mead, having had access to his correspondence with the publisher.  I think it's very interesting material.

Let's hope that one day John Rhode's literary agency will allow him to be (legally) reprinted! It would be nice, for that matter, to reprint Annie Haynes, who died way back in 1929 and hasn't been reprinted in over eighty years and is quite collectible.

One more thing for now: Here's a blog interview I did with Pietro De Palma, over at his blog, Death Can Read.  See also this interview with Rich Westwood at Past Offences, if you haven't already!
Posted by The Passing Tramp at 5:23 PM