Royce Bucknam Howes (1901-1973) wrote eight detective novels, but he was better-known in his day for his journalism.  Born in Minneapolis, he briefly attended the University of Minnesota before serving in a National Guard regiment in World War One.  He joined the Detroit Free Press in 1927, rising to become the newspaper's editorial director. During World War Two he headed the Army News Service, rising to the rank of Lieutenant Colonel.

In 1953 the United States Air Force brought dismissal proceedings against Air Force Reserve Lieutenant Milo J. Radulovich, claiming that his father and sister had Communist sympathies.  Howes and the Free Press took up the cause of Radulovich, who was a native of Detroit, prompting the Deputy Inspector General of the Air Force to pay a visit to the Free Press bosses, where, according to Howes, he informed them that "the newspaper would be well advised to stop championing the Reservist's cause."  At a hearing Lieutenant Radulovich was stripped of his commission.

Despite pressure from the Air Force, however, Radulovich's case was taken up by no less than CBS newsman Edward R. Murrow, who aired the story on his popular See It Now program.  A month after the program aired, Radulovich was reinstated.

Over half a century later the Radulovich affair (and Murrow's part in it) was dramatized in the Oscar-nominated film Good Night, and Good Luck (2005).

In 1955 Howes won a Pulitzer Prize for editorial writing for his editorial "The Cause of a Strike," which analyzed the responsibility of both labor and management for an unauthorized strike that sidelined 45,000 Chrysler workers.

So you can see that mystery writing was rather a lesser matter for Howes.  Yet mystery writing is what we do here at the blog of The Passing Tramp, so herewith is a consideration of Royce Howe's fifth detective novel, Murder at Maneuvers, which offers some interesting sidelights on the Radulovich affair that was to come fifteen years later.

Though the novel is under 80,000 words, it took me a good while to finish Maneuvers, not because it is a bad detective novel but because it is not all that an engrossingly-told one.  It is rich neither in material clues, rounded characters nor colorful settings.  However, when I finished the book I had to admit it was competently put together.

The book details the fallout from the fatal shooting of a Soviet military officer, General Damoff, observing summer maneuvers at an arming training camp, Camp Waller.  Howes' series detective, police captain Ben Lucias (Maneuvers is the third Captain Ben Lucias mystery), is at Camp Waller as the guest of the commander, Colonel Deyo Opper, an old friend of his from their days serving with U. S. forces in the Philippines.

Opper functions fitfully as a Watson figure and is fairly entertaining.  There are five additional army officer characters, who are not all that distinguishable, aside from Lucias' martinet antagonist, Major Hovek.  Also playing important roles in the novel are two men and two women who are partners in a local speak-easy, where the officers go to drink hard liquor in this "local option" county.

Two of the speakeasy proprietors, Leo Brusiloff and his sister Marie, turn out to be Communists. Howes' attitude to Communism, as reflected by his characters in the novel, is interesting.  He views American Communists as harmless cranks and many Soviet Communists as admirable people. Lucias and "good" characters in the novel repeatedly dismiss the Communist threat to the United States, while "bad" characters foolishly fulminate against the Red Menace, sounding like Joe McCarthy prototypes.

Brusiloff is what you'd all a Red.  Probably harmless enough and doesn't do anything but sit around talking about world revolutions and the bosses.  He's the kind that gives professional patriots a fat living and preachers something to talk about when they run out of ideas.

After reading these words it's pretty easy to see Howes taking on McCarthy in the 1950s.

And here's Lucias on the deceased General Damoff:

He told himself again that he would like to get the fellow who killed Damoff....The general had seemed to be a fine man, and he certainly had been a remarkably good physical specimen.  To Lucias it seemed particularly grievous that a big, staunchly molded man such as Damoff should come to his end by a bullet in the back. 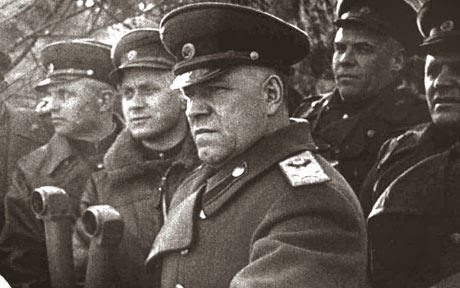 Although this is not a richly clued mystery, there are clever dodges involving guns and motivations and I especially enjoyed the final chapter, where Lucias explains all in a classic English drawing room denouement (though it takes place in Camp Waller visitors' bureau). In the end, I would say I enjoyed Murder at Maneuvers enough to seek out more of the genre work by this interesting author.
Posted by The Passing Tramp at 10:52 PM