The door opened noiselessly, and four men came in.  They were in plain clothes, and one carried a large box.

"Evening," said the first.  "I am Chief Inspector Pointer from New Scotland Yard.  These are detectives Watts, Miller and Lester.  What's wrong?"

Sometimes The Eames-Erskine Case, published ninety years ago, is listed as A. Fielding's second crime novel, but I believe it was her first.  Certainly it was Fielding's first Chief Inspector Pointer mystery. 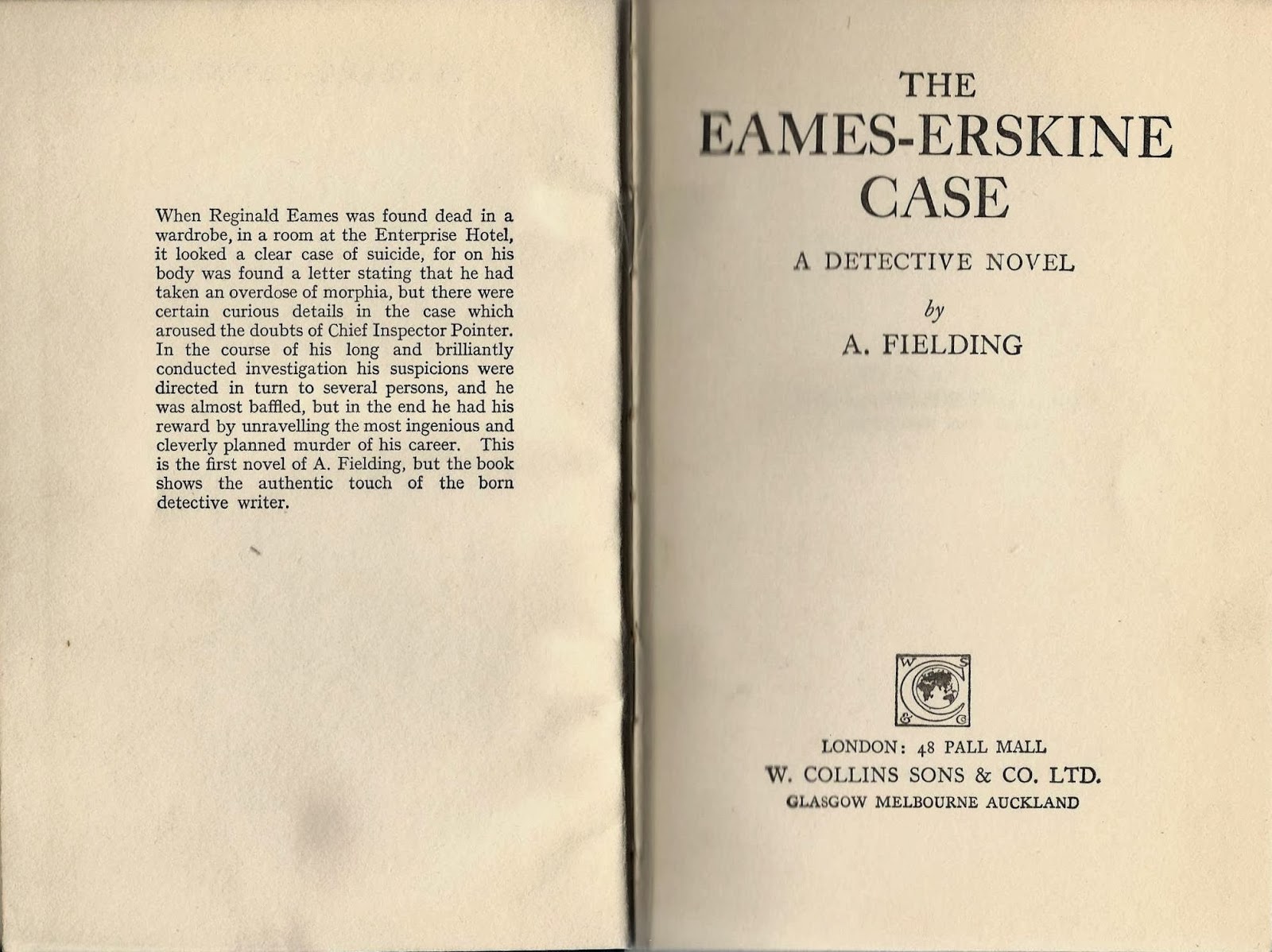 I learned more about the cleverly named Pointer here than elsewhere in the Pointer canon. I suspect Fielding lost interest in fleshing him out as a character, which is too bad.

In The Eames-Erskine Case, we learn that Pointer lives "in Bayswater.  He liked its open squares and clearer air. He shared three rooms there with a friend, James O'Connor, now a bookbinder, but during the War a very successful member of the Secret Service."

I discussed both the Crofts and Cole novels in the draft version of Masters of the "Humdrum" Mystery, though the chapter on Cole (and his wife Margaret) was cut by my publisher to shorten the manuscript. Along with The Eamses-Erskine Case, the Crofts and Coles novels constitute an important, and mostly ignored, strain with English Golden Age mystery: detective novels with a non-aristocratic policeman as lead sleuth.

Such novels were actually common during the Golden Age, though today we usually are led to believe quite the opposite (I recall one academic writer stating that Ngaio Marsh's Roderick Alleyn, who debuted in 1934, was the first English Golden Age police detective protagonist, which is not even close).

These novels were tremendously popular in England and influenced the socialist academic G. D. H. Cole to try his hand at a mystery, the aforementioned Brooklyn Murders.  Thus was launched another detective series, one in which Cole shared authorship credit with his wife, Margaret Cole (though I discovered that the novels were in fact authored variously by one spouse or the other).

Eames-Erskine starts out with Pointer investigating a suspicious suicide at a London hotel by one Reginald Eames (Cole would use a hotel setting in his next Wilson detective novel, The Death of a Millionaire, 1925).

Although Fielding doesn't depend on a Crofts specialty--detailed alibis, often involving train timetables--there is much painstaking investigation by her policemen, in the Crofts manner.

The author has constructed in this novel a complex and cleverly plotted problem, with many red herrings and surprising twists and turns. There's even some subsidiary love interest, quite acceptably done, as well as a couple trips to France (Paris and the Riviera). Crofts mysteries often saw sleuths traveling to Continental Europe, especially in the 1920s.

I did not forsee the solution, which seemed to me to hold together, even though once again the reader is not allowed to see all of Pointer's clues, a blemish on an otherwise excellent detective novel.

All in all, The Eames-Erskine Case is a fine example of what Fielding could do when she wrote with more care, and it's a first-rate example of a 1920s English mystery.
Posted by The Passing Tramp at 2:16 AM