On November 13, 1977, Julian Symons reviewed Agatha Christie's An Autobiography and John McAleer's Rex Stout: A Biography, in a New York Times review essay titled--rather inelegantly, it must be admitted, but I'm sure Symons was not to blame for that--"Two Who Dun It" (the two Crime Titans had recently passed on, Stout in October 1975 and Christie just a few months later in January 1976).


Christie expressed opinions "about life and society" that "are never original, often banal," wrote Symons bluntly.  She was "both conservative and Conservative in the most conventional way."  Yet he found Christie's An Autobiography charming and the author herself "the creator of the most cunningly deceptive fictional plots of the half-century in which she lived."

Rex Stout's work and that of his biographer, John McAleer, did not come off so well.

About Stout personally, Symons was quite favorable, dubbing Stout "a remarkable and forceful personality" and noting his "constant and time-consuming support of radical causes."  Yet "no livelier man had been the subject of a duller book," Symons found.  McAleer, in Symons' view, included vastly too much detail.  Moreover, his "own comments are almost always jejune or banal." "We learn little of Rex Stout's personality as we trudge though this forest of fact," complained Symons.

Symons noted that at the beginning of Stout's writing career, Stout had written four psychological novels, including one that "dealt with homosexuality" ("Can there have been some truth in those stories about Nero and Archie," Symons asked archly).

Yet instead of continuing to probe such challenging subject matter, Stout had found it "easier, more comfortable and more profitable to settle for Nero and Archie...."

Symons proceeded to cut Nero Wolfe down to size, so to speak:

At the risk of outraging an accepted American myth it must be said that McAleer absurdly inflates the stories' merit....Stout was simply not in the same stylistic league with Hammett, Chandler or Ross Macdonald.  His prose is energetic and efficient, nothing more.  His plots lack the metronomic precision of Ellery Queen's.  The books survive though Nero's personality and the Nero-Archie relationship, but to say that Nero embodies the values of Western civilization, or to suggest that he is a brother under the skin to Dr. Johnson, is ludicrous.

Stout's great achievement, in Symons view, was creating an outsize "Superman detective who will be remembered as long as people create crime stories"; yet "this figure operates in the context of books that are consistently entertaining, but for the most part just as consistently forgettable."

All this carping did not sit well sit well with some New York Times readers who were devout fans of Stout; and they composed letters of protest. 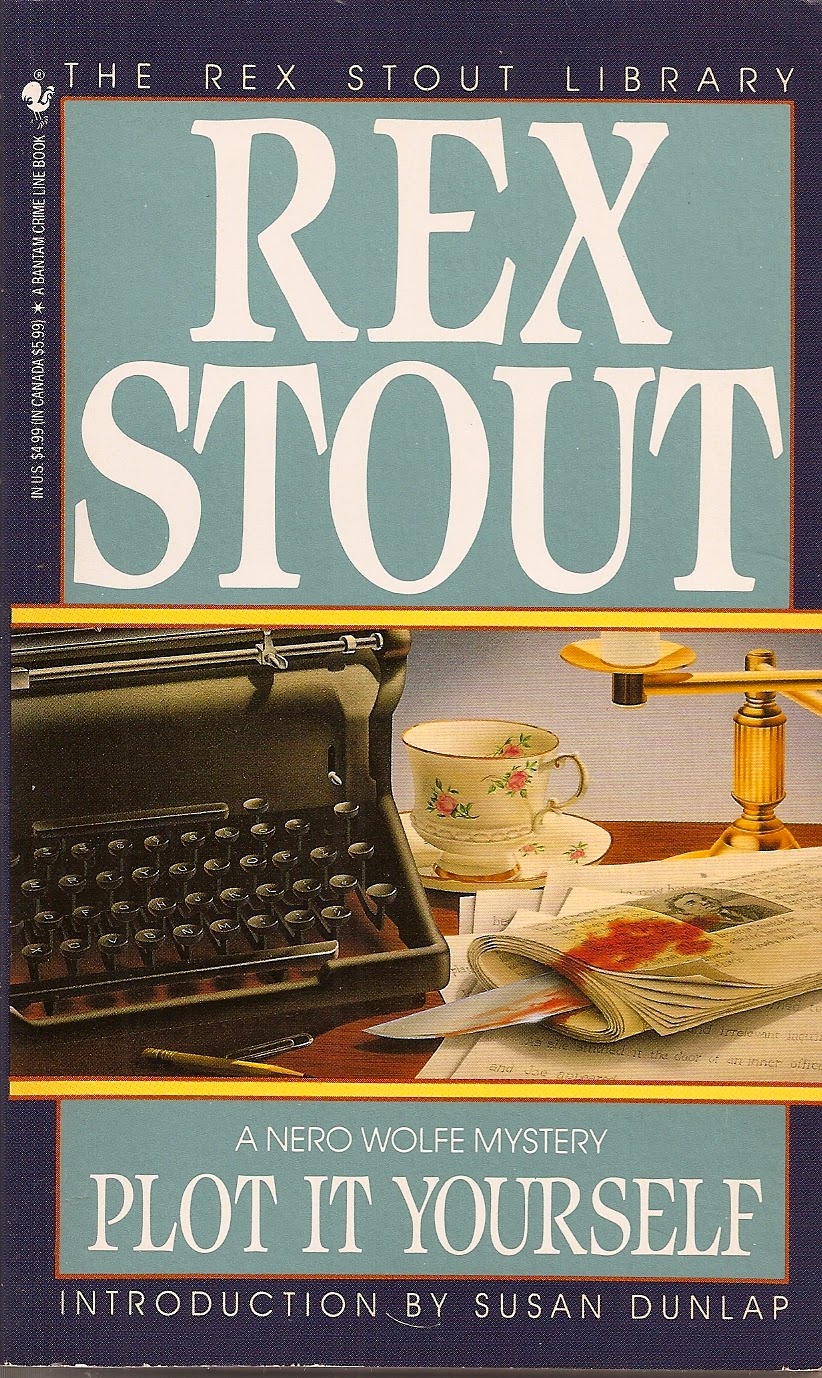 Marilyn Brooks of Needham Massachusetts asserted that for Symons to "rank Stout below Ross Macdonald (who is much more repetitive) or Ellery Queen (whose unrealistic devices and pretentious speech make his novels seem much more dated than Doyle) is to completely miss the character development that has taken place in Nero Wolfe and Goodwin though the years."

Brooks recommended that Symons "sit down and read all the Wolfe stories straight through...to see how true-to-life the characters, events and dialogue are."

The late Professor Richard H. Reis (1931-2008), who was Chair of the English Department at the university of Massachusetts, Dartmouth, could only explain "the hostility of Julian Symons' review" by concluding that Symons was jealous of Stout's success: "As a far less successful mystery writer than Stout, he splenetically attacks a biographer, when his real target is the biographer's subject."

For her part, Mrs. Albert Ortega of Prado Norte, Mexico--"a mystery fan for over 50 years"--complained about that homosexuality quip concerning Nero and Archie that Symons had made: "How dare he make snide allusions to possible perversions," she demanded.*

*(Not that I think they were, but if Nero and Archie were a couple, what would we call them? Narchie?)

The letter writers praised the quality of McAleer's biography too.

In his defense, Symons assured Marilyn Brooks that "I have what I regard as the best of Stout on my shelves, and I do reread them."  Of Professor Reis, Symons wondered why he was "so gratuitously insulting?"  And he reiterated his criticism of McAleer's biography:

There'll always be fans fascinated to know how often their hero changed his socks and what he had for dinner on a particular day, but recording such things doesn't make a biography.  As a researcher Professor John McAleer is fine: as a biographer he doesn't exist.

Whew! I recall looking over a library copy of the Rex Stout biography by the late John J. McAleer (1923-2003), a longtime professor of English literature at Boston College, back in the 1990s, but I can't recall too much about it. I admit I did not give it a detailed read, but I will simply have to read it now! The late Professor Jacques Barzun, I must note, deemed the book the "definitive account by a master biographer."

As far as Symons' motivations in publishing this tough review essay go, I think Professor Reis was unduly hasty in prescribing such pettiness to the esteemed English crime writer.

I feel sure Symons honestly believed that Stout had somewhat wasted his talent by not writing "crime novels"--i.e., psychological novels about crime--while Agatha Christie (and Ellery Queen) had lived up to what they did best in writing puzzle-oriented mysteries (I recall that Symons is far less positive about the later, more novelistic, Queen novels).

To Symons Stout was not as clever a puzzle-master as Christie or Queen (or John Dickson Carr he would have added), nor as "serious" a writer as Hammett, Chandler, Macdonald; and he is accordingly downgraded.  This criticism may be true enough, but I think it still leaves room for greatness.

Perhaps Stout better fits in the manners mystery writers Dorothy L. Sayers, Margery Allingham and Ngaio Marsh, authors whom Symons also tended to undervalue, but who in their best mysteries both plotted and wrote quite well.  Stout may have been "just" an entertainer to Julian Symons, but, as my recently posted review of And Be a Villain suggests, to me he unquestionably belongs in the pantheon of great writers of detective fiction.
Posted by The Passing Tramp at 1:23 AM