Kids Are Murder! My Son, the Murderer (1954), by Patrick Quentin

For Father's Day I thought I would offer a piece on Patrick Quentin's My Son, the Murderer (1954; in UK, The Wife of Ronald Sheldon).

This was the tenth Patrick Quentin crime novel and the first under that name probably written solely by Hugh Callingham Wheeler (1912-1987), who later went on to write for films and the stage, winning Tony awards for his books for A Little Night Music, Candide and Sweeney Todd.

The previous nine PQ novels, beginning with A Puzzle for Fools, were written together by Wheeler and his then-partner Richard Wilson Webb (1901-1966), between 1936 and 1952.

All but one of them have the series character Peter Duluth, a theatrical producer and amateur sleuth. Along with his actress wife, Iris, Peter appears one last time in My Son, the Murderer, although his brother Jake plays the lead role.

Also appearing is Lieutenant Timothy Trant, a suave cop who originally surfaced in another Wheeler-Webb mystery series, written under the name "Q. Patrick."  Trant appeared in the Q. Patrick books Death for Dear Clara (1937), The File on Claudia Cragge (1938) and Death and the Maiden (1939), before crossing over to appear in the Patrick Quentin novel Black Widow (1952).  After My Son, the Murderer Trant intervened in three more Patrick Quentin novels, including the final one, Family Skeletons (1965).

It's all rather confusing and may have something to do today with Patrick Quentin's relative obscurity, despite the fact that the books were highly praised and that Wheeler, as mentioned above, went on to achieve great prominence in film and stage work. 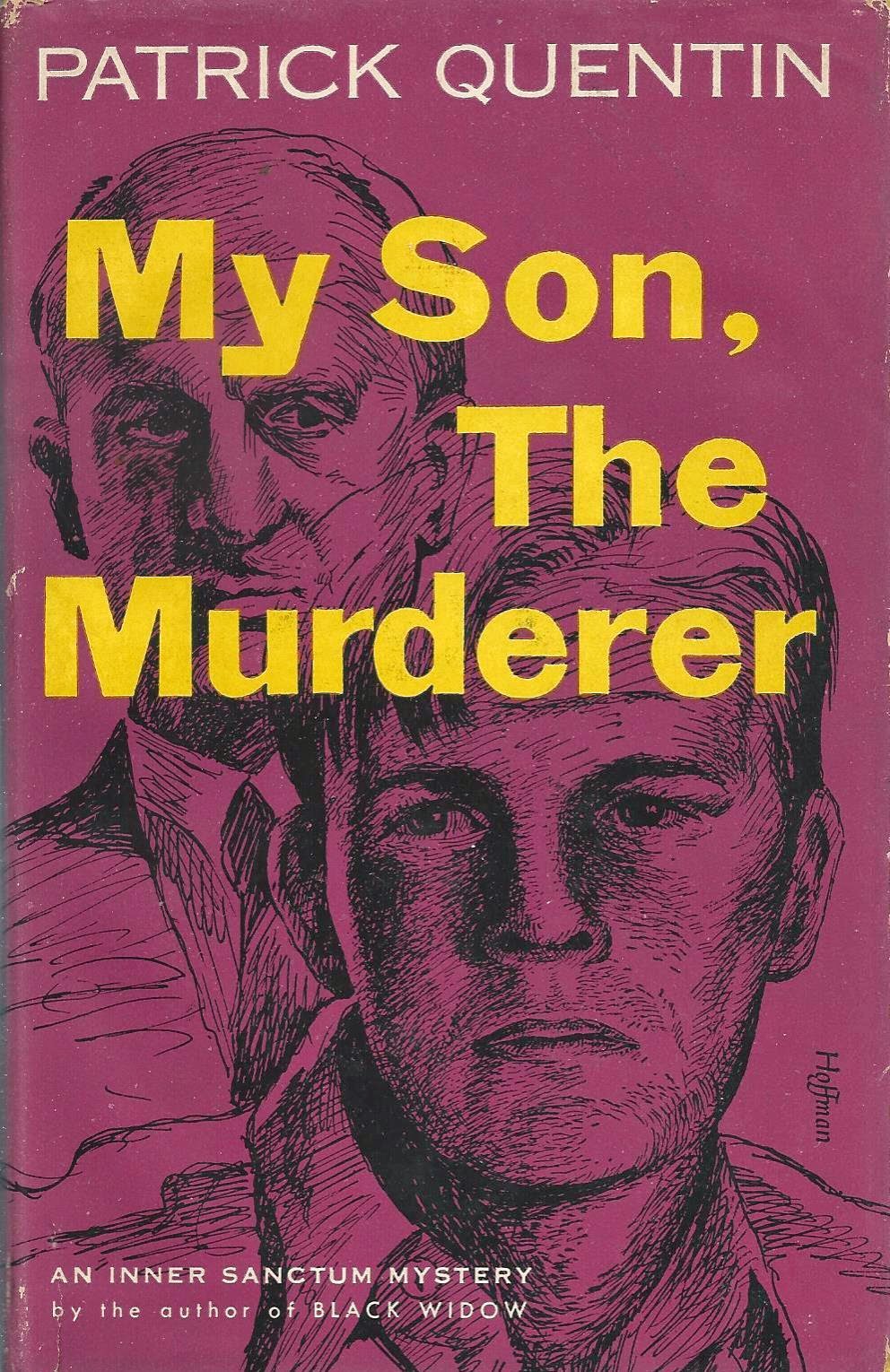 Of the two men, Richard Webb was, as a mystery writer, the more aesthetically traditionalist of the two. The books offered solely by Hugh Wheeler are less like formal detective novels and more like psychological crime novels, with great emphasis being placed on the emotional trauma suffered by the people involved in a murder investigation, in the modern fashion.

Certainly we see this in My Son, the Murderer, the story of a father, Jake Duluth, trying to prove his estranged son did not commit murder.  Jake, who narrates the tale, is a partner in the publishing firm of Sheldon and Duluth. When the novel opens he and his son both are trying to recover from the seemingly inexplicable suicide of Felicia Duluth, the wife of Jake and mother of Bill.

Jean is the daughter of the unsuccessful but esteemed highbrow novelist Basil Leighton; and with his daughter's marriage to Ronald Sheldon has come, most conveniently, a lucrative book contract with Sheldon and Duluth. Basil has also accompanied Jean to the United States, along with his slavish wife Nora and his aloof "muse," Phyllis Brent, of some backwater English gentry family.  The whole odd menage is installed with Jean, Ronald and Ronald's spinster sister, Angie, in Ronald's mansion.

You may have guessed already that Bill Duluth falls in love at first sight with Jean Sheldon. Young love, it seems, can't be denied. When Ronald Sheldon is found shot dead at his home, Bill is the main suspect.  Can his father--the only person who believes Bill's insistence that he's not guilty--save him?

As befits a 1950s crime novel, in Son there is a lot of time devoted to emotional travail and psychological speculation, but at heart this is still a fairly clued detective novel, and the last portion, where the finger of suspicions shifts rapidly from person to person, is especially good.  There is also a pointed satirical look at British attitudes toward the United States--Wheeler himself, like Webb, was an Englishman by birth, although by the time of the publication of Son he had lived in the US for about twenty years--as well as at the odd personality cults of would-be Great Novelists (by the latter item I was rather reminded of Ruth Rendell's 2007 Wexford mystery, Not in the Flesh).

This is a admirable specimen of the 1950s American crime novel and should be brought back into print. Hugh Wheeler went on the write six more crime novels under the PQ name, some of the quite good, though with Son he bid adieu to the Duluth clan, witnesses through the years to so many mysterious murders.
Posted by The Passing Tramp at 7:39 PM