"I find it very difficult...to read [a detective story] not set in rural England." 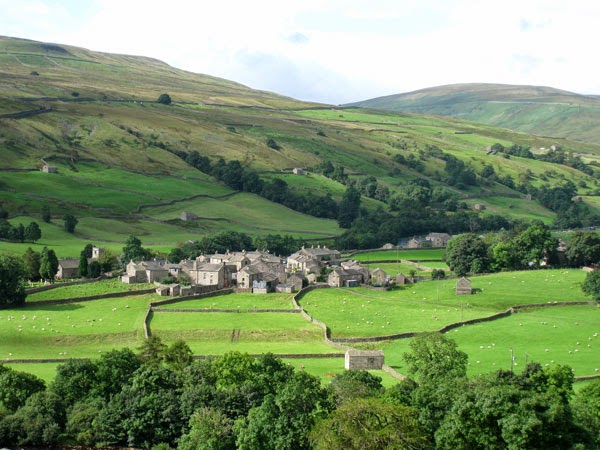 In Masters of the Humdrum Mystery and other writings I have argued that the view of most Golden Age novels as taking place in highly socially stratified villages and country houses is exaggerated, being a construction partly of post-WW2 retrospection.

W. H. Auden's "The Guilty Vicarage" essay has influenced the development of this view, as have, I suspect, the Miss Silver novels of Patricia Wentworth (1878-1961). Although in setting and milieu they seem like what we tend to think of as classic Golden Age English mysteries, most of them were in fact published after the outbreak of the Second World War, commonly seen as the end point of the Golden Age of detective fiction.

Miss Silver Comes to Stay (1949) is the fifteenth of the 32 Miss Silver mysteries, and one in which, I find, Wentworth is clearly embracing the mythic or magical aspect of the detective story, what Auden in his essay calls the "Great Good Place."  Murder disrupts the state of order in the village, requiring the detective to expose him or her and cast him out, restoring the disrupted order.  I think Wentworth's novel is an extremely good example of this sort of mystery.

In this particular tale Miss Silver comes to stay in the village of Lenton, to which she has been invited by an old school friend.  Her appearance is providential, for a most shocking murder soon takes place, one that threatens to produce a grave miscarriage of justice.

James Lessiter, son of Mildred Lessiter, widowed mistress of the decaying Melling House, after many years away making his fortune in business has returned to the family home, his mother having passed away.  Philistine that he is, Lessiter has no respect for tradition and plans to sell: "He had no regrets. The house could go.  If he wanted a place in the country, there were more amusing spots than Melling....Something modern and labour-saving."

Vindictive and, indeed, sadistic, Lessiter is determined as well to settle some old village scores. Soon, however, someone settles him.

Lessiter is found dead, most classically: in his study at Melling House, his head stove in by the fireplace poker. Official suspicion quickly focuses on an old flame of Lessiter's, Rietta Cray, and her tempestuous nephew and ward, Carr Robertson.

Wentworth makes clear that neither of these characters, both of whom have their own love stories, can be guilty (with Agatha Christie one can never be sure of these things), so much of the novel has the quality of a suspense tale: Will Rietta or Carr be arrested, we wonder, and how will Miss Silver get them out of their grim predicament?

A good part of the novel involves Miss Silver uncovering a fact that we, the readers, already know; yet the final portion offers some rather fine deception and detection, I think.

Throughout it all, Miss Silver, the upright and elderly governess turned sleuth, functions superbly, in her quest for truth probing to people's emotional cores while placidly knitting "a cosy coat and knickers for her niece Ethel Burkett's little Josephine."

The characters in the book note the awesome phenomenon that is Miss Silver:

"I don't quite know why she impresses one, but she does.  It's a sort of mixture of being back at school again and finding yourself wandering about in the fairy story where you meet an old woman and she gives you a hazel nut with the cloak of darkness packed inside it."
....
"She knows people.  All the things they hide behind--appearance, manner, the show we put up to prevent other people knowing too much about us--she sees right through them, and judges you on what's left."

Throughout the novel as well, Wentworth compellingly conveys the social strata of the village, from the seemingly inevitably decaying genteel folk, to the professional class and tradespeople, to clerks, servants and inquisitive telephone operators.  One can debate the exact realism of this setting in 1949, but it is undeniably a well-conveyed one.

Through Miss Silver Wentworth continually invokes traditional standards of decency and honor. Usually what is older is deemed better ("There was nothing that was not suitable, but the general effect was that everything was a little too new").

The ethos is undoubtedly conservative.  At one point the author refers to "this hard post-war world," as if for many the pre-war world had not presented its certain share of hardness.  Miss Silver regrets that "labour shortages and heavy taxation" has led to the reduction of "so many fine country places." She allows that now "the good things of life were being spread more evenly," yet she laments "the passing of so much that was beautiful."

However, there are some seemingly unorthodox notes. In an era where the word cougar referred only, I presume, to a big cat, Miss Silver sees a young man's romantic interest in an attractive, designing older woman (age 43) as something quite natural.

She also strikes something of a feminist note in this clever sentence: "With every esteem for the manly virtues, and a good deal of indulgence towards the manly failings, it had often occurred to [Miss Silver] that in moments of stress a man could be dreadfully in the way."

Perhaps one manly failing throughout the decades since the advent of Miss Silver has been a failure by many male mystery readers to appreciate the many "feminine" virtues of this lady detective.

For whatever Julian Symons and Jacques Barzun (see my previous post) may have thought about it, Miss Silver indeed did come to stay upon the literary scene--and she shows no sign yet of leaving it.
Posted by The Passing Tramp at 3:15 AM