Polly Wants a Killer: The Case of the Perjured Parrot (1939), by Erle Stanley Gardner

In 1939, the American crime fiction reviewer "Judge Lynch" (William C. Weber) listed his favorite mystery novels of the year as:

A Coffin for Dimitrios (aka The Mask of Dimitrios), by Eric Ambler
The Crying Sisters, by Mable Seeley
Strawstack, by Dorothy Cameron Disney
Overture to Death, by Ngaio Marsh
The Problem of the Green Capsule (The Black Spectacles), by John Dickson Carr
The Footprints on the Ceiling, by Clayton Rawson
The Spider Strikes (aka Stop Press), by Michael Innes

I have read all these novels and I think the first and last of these books are truly exceptional, entirely original mystery classics.  Rich Westwood at Past Offences has reviewed the Ambler for this month's mystery challenge (a book from 1939). For my part I have been rereading the Innes, but it is loooong--about 450 pages--and I will have to blog it next month to do it justice.

So, what to do?  I turned to one of mystery fiction's old reliables, Erle Stanley Gardner, and his 1939 novel The Case of the Perjured Parrot--one of four crime novels (in three different series) that the prolific Gardner published that year. 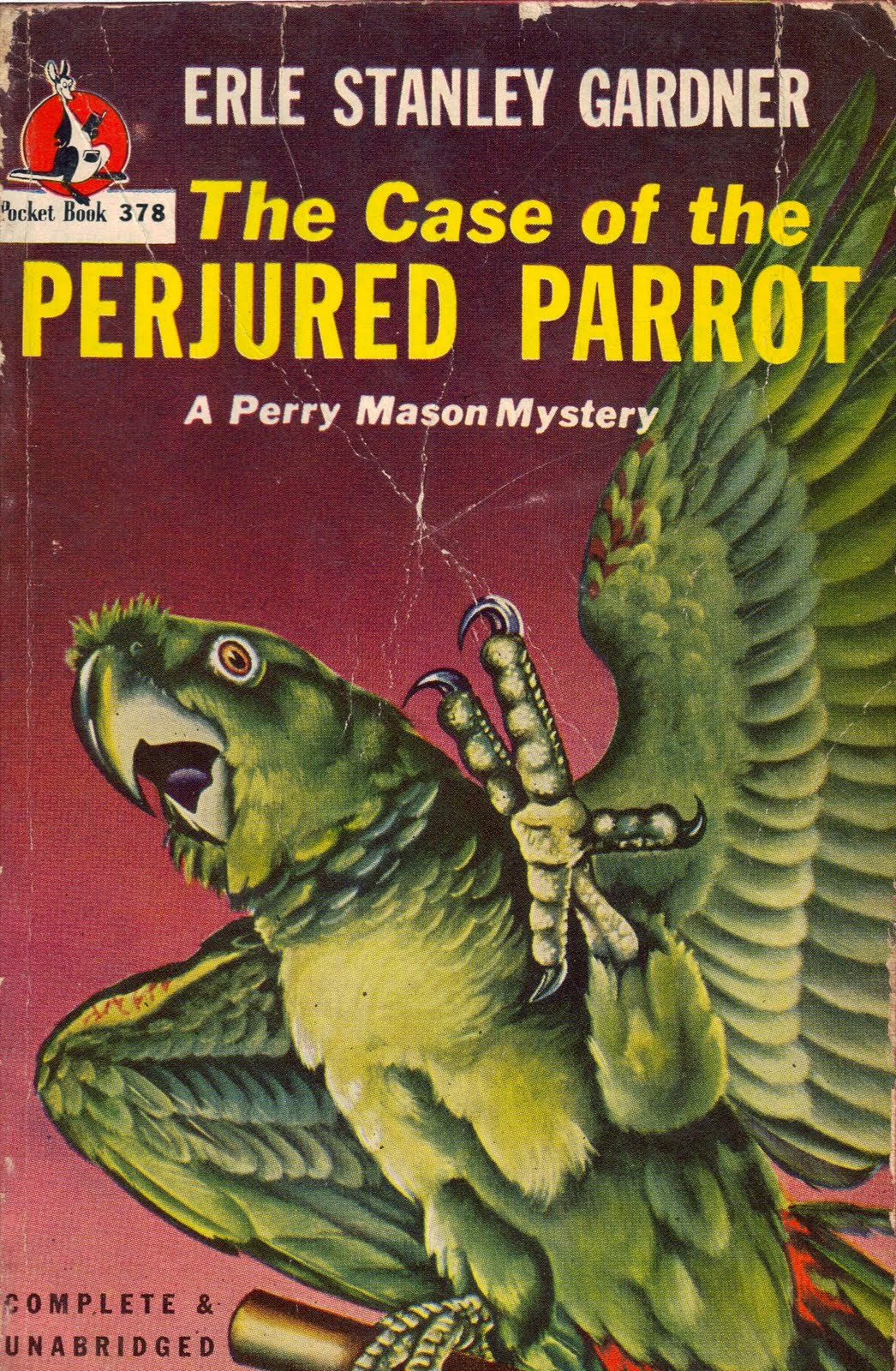 In Parrot, attorney Perry Mason is hired by Charles Sabin, the son of eccentric millionaire Fremont C. Sabin, after the elder man is found shot to death in his mountain cabin. The elder man's pet parrot, Casanova, was left unscathed. But wait!  Charles insists that this parrot is not actually his father's parrot! But wait again! Why in the world would someone have substituted parrots? And where the heck is the real Casanova (the real macaw, you might say).  Perry is intrigued.

Also in the offing are the millionaire's private secretary, Richard Waid; his gold digging second wife, Helen Watkins Sabin; and Mrs. Sabin's son from an earlier marriage, Steve Watkins.  And then there's the "other woman," quiet librarian Helen Monteith, who says Fremont Sabin married her!  When the real Casanova finally turns up, he keeps saying Helen "shot me," but can a parrot testify in court?  And which Helen does he mean, anyway? Perry has got a definite situation on his hands.

This is quite a well-plotted mystery novel that zips right along and has an especially nice twist at the end.  The writing is flat, though functional.  On the strength of the Gardners I have read so far, I would say that Gardner was an American "Humdrum"--and I mean that in a positive way.  He had, as Raymond Chandler once enviously allowed, a fertile plotting brain; and that brain was in fine form here.  If plot's your thing (with some clever legal bits thrown in) you should enjoy The Case of the Perjured Parrot.

As stated above, Gardner is a flat writer and there's not much to tie this book to the specific year 1939. However, there are references to people being out of work and to Fremont Sabin's philosophy that people are too caught up in the pursuit of material things (easy for him to say!), and these remind readers that the novel is set in a decade where there was prolonged economic depression in the United States, with people seriously reassessing their lives.

Also, I would say, on the strength of the last sentence, that Perry and his loyal secretary, Della Street, were sleeping together--but then love, surely, is timeless.
Posted by The Passing Tramp at 2:44 PM