Grant glanced at him again, approvingly.  He was a very good-looking man indeed, now that he took notice.  Too blond to be entirely English.  Norwegian, perhaps?

Was it possible, Grant wondered, that those cheekbones were being wasted in a stockbroker's office? Or was it perhaps...that the young man was less beautiful in the daylight?

Cover illustrations for paperback editions of Josephine Tey's To Love and Be Wise--though not the most recent ones--have tended to highlight Leslie Searle, the character assessed above by Tey's Inspector Grant as having astonishing, unearthly beauty (at points in the novel Grant and others also compare Searle, on account of those extraordinary good looks, to a demon).

The edition most successful at capturing this quality is, I think, the 1953 one by Pan, with art by the great Sam Peffer (1921-2014), known as "Peff" (see side illustration), who is probably best known for his sexy James Bond covers from the 1960s.  Nobody does it (Bond and Bond girls) better than Peff! He also did the splendid the Pan cover for Miss Silver Comes to Stay, which I reviewed here a few weeks ago.

The enigma of Leslie Searle is central to Tey's novel To Love and Be Wise, which sees her Inspector Grant returning to a full-scale role in one of her books, for the first time since A Shilling for Candles, published in 1936 (Grant appears in The Franchise Affair, 1948, but in a peripheral role). Grant also would play leading roles in the next two--and, regrettably, final--Tey novels, The Daughter of Time (1951) and The Singing Sands (1952).

In To Love and Be Wise, Grant briefly meets Leslie Searle at a literary sherry party (such parties are "not his cup of tea," Tey wryly informs us, but he has gone there "to collect [his actress friend] Marta Hallard and take her out to dinner."  Grant next hears of Leslie Searle when he finds that Searle has disappeared at a village in "Orfordshire" and is thought to have drowned in a river.  Grant comes to the village, Salcott St Mary, to investigate this mysterious disappearance. 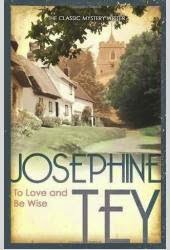 During Searle's short visit to Salcott St Mary, Searle, a highly-regarded celebrity photographer, had managed to set quite a few hearts, female and male, aflutter (even coming between Walter Whitmore and his fiancee, Liz Garrowby); and Grant concludes that several people may have felt they had a motive for murder.

I found To Love and Be Wise a charming mystery, even though the solution was spoiled for me by my having read the careless entry on it in Jacques Barzun's and Wendell Hertig Taylor's A Catalogue of Crime. Tey is a good tale-spinner and felicitous stylist, making To Love and Be Wise quite enjoyable to read, even when "spoiled."  If anything, I might have liked the book to have been longer and to have more extensively explored the characters' personalities (not a complaint I make about lengthy modern crime fiction!).

The mystery itself is interesting, though of course I can't assess now whether I would have figured it out on my own.  There is also some memorable satire directed against the artistic community of Salcott St. Mary.  Tey does not seem to have thought much of writers, despite the fact that she was one herself! I thought that a couple of the arty characters perhaps might reflect aspects of the popular writer Beverley Nichols, who published, among other works, some very successful village home and gardening books. Did anyone recognize any specific people from the period?


Tey's critics, such as Julian Symons, have charged her with having had conventional beliefs. It would be nice to discuss whether that view is supported or undermined by the mystery solution of To Love and Be Wise, but of course that would spoil the book for those of you who haven't read it; and I don't want to do to anyone what was done to me!

I will write more about some of Tey's attitudes in To Love and Be Wise in the near future; suffice it to say for now that I highly recommend the novel.  I think that it is, along with The Singing Sands and A Shilling for Candles, the best of her true detective stories (I'm also quite partial to The Franchise Affair, which is more suspense, in my view).
Posted by The Passing Tramp at 3:53 PM