The way Casey figured it, life was a sour deal.  It was something with a beginning you didn't ask for, an ending you couldn't help, and nothing in between that would sell even at a charity auction.  But it came in a package, like a Christmas tie, and once the package was opened you were stuck with it.

She published eighteen crime novels between 1951 and 1976, getting off to a strong start with The Kind Man and Gold Cost Nocturne--retitled, for no good reason that I can see, Dead on the Level in paperback and, for somewhat better reason, Murder by Proxy in the UK-- both of which were strongly praised in both the US and the UK.

In the UK Rupert Croft-Cooke (the British mystery writer Leo Bruce) said of Nielsen, in his review of The Kind Man, "I consider her the most worth watching of all new arrivals in the world of detection."

She was also more recently praised by Marcia Muller in Muller's and Bill Pronzini's 1001 Midnights (1986) and, of course, is being currently promoted by Sara Weinman.

Since  John Norris at Pretty Sinister has already reviewed The Kind Man, I thought I would take a look at Nielsen's second crime novel, Gold Coast Nocturne (it's often erroneously listed as her first).

It was adapted into a 1954 British film, Murder by Proxy (Blackout in the US), directed by Terence Fisher and starring "regular Joe" American actor Dane Clark (I specifically recall him from Angela Lansbury's Murder She Wrote in the 1980s) and lovely blonde British actress Belinda Lee.


I noticed some of the reviews of Murder by Proxy/Blackout on imdb.com complain that the film is not true noir, but rather a detective story, and that the mystery plot is confusing. There is one point of character motivation that I feel was a bit skirted in the book, yet overall I thought Nielsen managed the complex plot wonderfully. I plan to watch the film to see how it matches the book (from clips it looks like a close match). Like the film adaptation, it seems, the book is not true noir, but rather a (medium) hard-boiled detective novel--and a very good one. 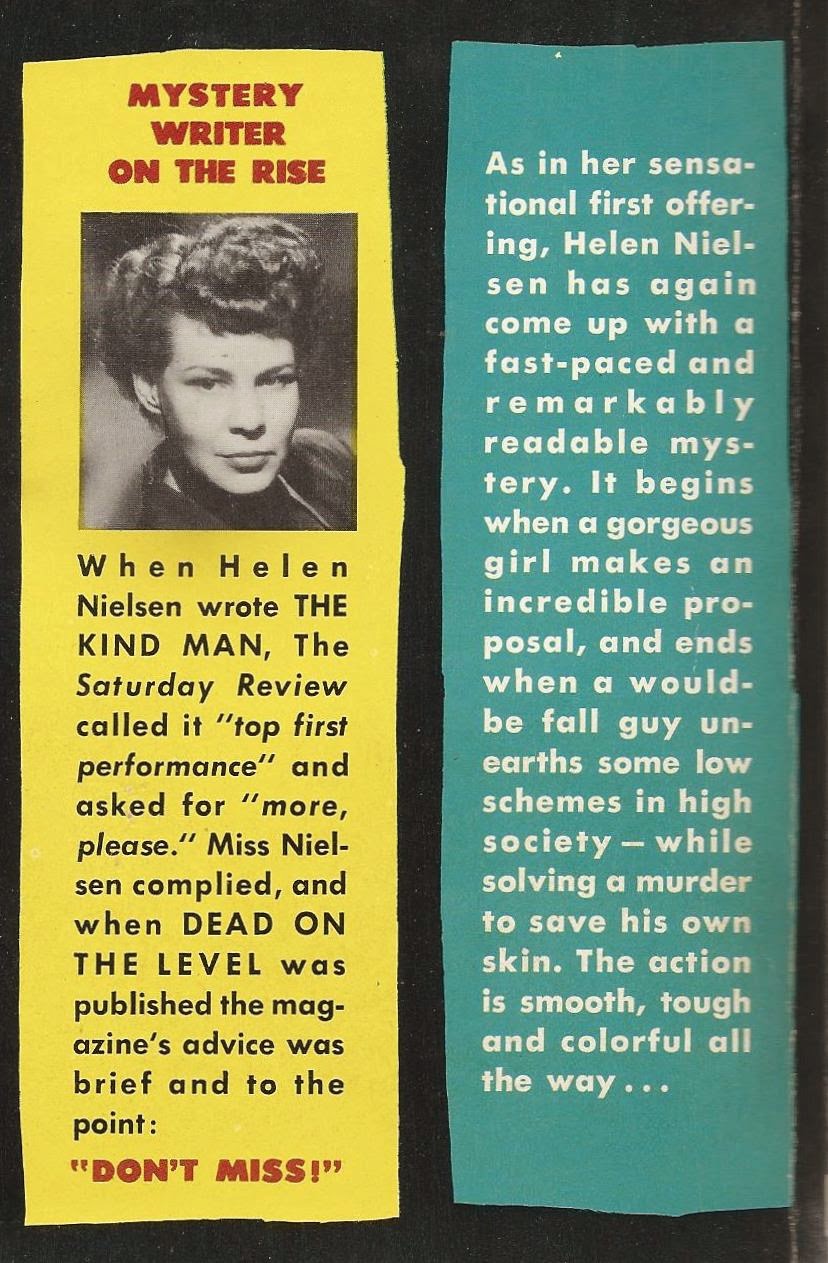 Like so many American mysteries of this era, Gold Coast Nocturne has as its protagonist a down-on-his-luck World War Two vet (Pacific theater, as so often seems to be the case in these books), Casey Morrow, aka Casimir Morokowski, who left his mother and stepfather to join up with the armed forces, then, after the war, went into business in California.

His business went belly up, however, and when the novel opens Casey is in a bar in Chicago, miserably drowning his sorrows with his very last dollars.

There he is approached by beautiful young blonde, expensively attired, who has a proposition for him--a business proposition.

The mystery blonde wants him to marry her, in exchange for $5000!  Casey is so drunk he's not exactly sure what he's agreeing to, but he goes off with her. He wakes up the next day in the apartment of another woman, plucky artist Maggie Doone, and discovers he was dumped here by last night's blonde, who turns out to be heiress Phyllis Brunner, whose rich Daddy just happened to get his head bashed in with a poker in his study the same night she was being squired by Casey.

Casey suspects he's been set up as a patsy for a murder.  In classic fashion, he decides he's going to have to try to solve the murder for himself, before he's hauled off to the hoosegow by the police.

This is an efficiently constructed mystery novel, with a plot that keeps one in suspense until near the very end. The author makes a sympathetic figure of Casey, who, while no Chandlerian wisecracker, is a good everyman character. There are as well interesting glimpses of Chicago, including not only the abodes of Gold Coast swells but Casey's old Polish immigrant neighborhood. While I would not rank Gold Coast Nocturne with the greatest masterpieces of the more hard-boiled detective novel, it is, I would say, a top-drawer example.  I will read more by Helen Nielsen.

Gold Coast Nocturne is available for Kindle on Amazon (under the title Dead on the Level), from Prologue Books. There is also that killer Dell paperback edition, a dreary British hardcover first by Gollancz and a scarce American hardcover first by Ives Washburn.
Posted by The Passing Tramp at 6:29 PM