Dane Clark (1912-1998) is one of those actors that you, if you are, like the Passing Tramp, in middle age, have almost assuredly seen on television earlier in your life, even if you don't match the name with the face. I recall him playing an FBI agent in Season One of Angela Lansbury's beloved mystery series, Murder She Wrote, the "Watson" in that episode to Lansbury's Jessica Fletcher. I don't know why I remember this character, but I suppose I have to chalk it up to Clark's acting skills, having seen some of his other genre film work of late.  He's good!

Dane Clark was known in the 1940s as the "B-list John Garfield," but I don't believe this appellation does him justice (it's a bit like when the great Ida Lupino is dismissed as the "poor man's Bette Davis"). Dane Clark was his own man. Both John Garfield (born Jacob Julius Garfinkle in 1913) and Dane Clark (born Bernard Zanville in 1912) were Jews from New York City, but Clark came of much more comfortable circumstances than Garfield, graduating from Cornell and getting a law degree before ending up in acting (after stints in boxing, baseball, construction, sales and sculptor's modeling--he had found lawyers weren't doing to well in the Depression either).

In 1941 Clark married the artist and sculptor Margot Yoder (a distant relative of my family) and the next year appeared in several films (uncredited): The Pride of the Yankees ("Fraternity Boy"); Wake Island ("Sparks"); and, most notably at The Passing Tramp's blog surely, Dashiell Hammett's The Glass Key ("Henry Sloss").

By the end of World War II Clark was getting bigger roles, including that of the Bohemian artist in the Bette Davis identical twins melodrama A Stolen Life (1946); the escaped convict who has a desperate romance with Ida Lupino in Deep Valley (1947); and, in the Oscar-nominated film Moonrise (1948), the tormented Danny Hawkins, who is in love with gorgeous Gail Russell and has, most inconveniently, killed her fiancee (played, very briefly, by Lloyd Brides). Today Moonrise pops up on lists of greatest noir films though regrettably it's not available on DVD (you can see on it Amazon instant video, however).

I've recently seen two of the above films, Without Honor and Blackout. 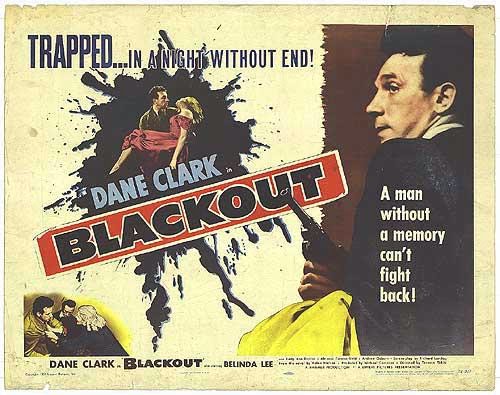 Blackout, as I have discussed in an earlier post, is an English adaptation of Helen Nielsen's Chicago-set hard-boiled crime novel, Gold Coast Nocturne (1951).  Although transferring the setting from Chicago to London is slightly awkward, to be sure, overall I was really rather impressed with this film. It is quite faithful to the novel, even using some of the dialogue.

As the beleaguered hero, Casey Morrow, out to solve a murder he is suspected of having committed, Dane Clark is excellent, as are the two lead women, Belinda Lee (sexy blonde heiress Phyllis Brunner) and Eleanor Summerfield (wisecracking artist Maggie Doone).  A couple crucial supporting performances could have been stronger, but overall I would quite recommend this film.

Without Honor was directed by Irving Pichel and written by James Poe, a distinguished writer for radio and film (though Poe wrote the screenplays for Cat on a Hot Tin Roof, Summer and Smoke, Lilies of the Field and They Shoot Horses, Don't They? he won his sole Oscar for Around the World in Eighty Days).

Without Honor followed the Alfred Hitchcock film Rope into theaters by one year, and the influence on the latter film on the former seems clear, with Without Honor playing as a feminized, suburbanized version of the classic Hitchcock film.

Laraine Day stars as Jane Bandle, a San Fernando valley housewife whose dalliance with businessman Dennis Williams (Franchot Tone) has been uncovered by a private detective employed by her rat fink brother-in-law, Bill Bandle (Dane Clark), who is still angry that she once spurned his advances and has been eyeing his chance to exact revenge.

Williams has come to the Bandle house to inform Jane that with a detective on their tails it's all over between them--he won't divorce his wife as he had promised. A distraught Jane, who when Williams dropped in to lower the boom had been preparing shish kabob for her husband's dinner (d'oh!), grabs a skewer and hysterically threatens to commit suicide on the spot. Williams grapples with her and ends up getting stabbed in the chest.

After Williams collapses in the laundry room, a panic-stricken Jane shuts the door on him but finds that the worst is yet to come: her snake-in-the-grass brother-in-law has invited Williams' wife, Katherine (Agnes Moorehead), to come over the Bandle bungalow to discuss a certain matter of marital infidelity. Oh, yes, and Jane's husband, Fred (Bruce Bennett, aka former thirties film Tarzan Herman Brix) should be along any minute now too....

This film has gotten its share of criticism over the years, but I enjoyed it.  The performances are quite good, in my view.  Tone is his customarily sophisticated self, but it's Dane Clark who dominates the film, as a highly memorable etching in sleazeball venom. A rather censorious New York Times, which didn't like the film, allowed nevertheless that "Mr. Clark does such a thoroughly good job in developing the revengeful brother into a full grown monster that one can almost forgive and commiserate with Laraine Day, despite her guilt of marital indiscretion."

Blackout is available on a good quality DVD that includes subtitles (it's also available on Amazon instant video).  Without Honor is available on DVD as well, though the quality is poorer, with the pounding Max Steiner score coming through more strongly than the dialogue.
Posted by The Passing Tramp at 2:31 AM