Headline Crimes of the Year (1952), edited by Edward D. Radin

For this month's #1952 book challenge, there are, in addition to the already discussed Black Widow, two more reviews I am adding today.

The book was published first in hardcover by Little, Brown, but its most memorable incarnation probably was in paperback, when it was reprinted that same year by Popular Library, in an edition thrillingly headlined The Inside Story of America's Most Shocking Crimes. Who wouldn't buy that for a quarter, Popular Library must have thought.

Just how Shocking are these true crimes, all of which were in the news around the late 1940s/ early 1950s? Well, by today's sad standards, not so much, but it's still interesting to see what mayhem was going on in the United States and other parts of the world during those ostensibly good old days. 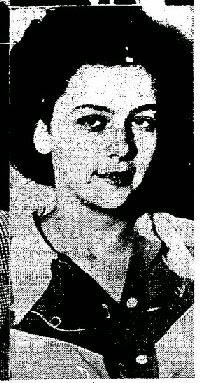 Only eight of the book's eleven crimes (all but one murders) actually took place in the US.  The one that made it on the cover involved a seventeen-year-old Texas hitchhiker con artist who at gunpoint robbed the men who picked her up; when one man resisted murder resulted.

It's not that interesting case from the standpoint of murder being a fine art, but Popular Library obviously liked the elements of sexual titillation. Also this case at the time inspired a lot of press editorializing about the menace of hitchhikers.

The real life culprit, "Sandra Peterson" (Sophie Anargeros from Massachusetts), was much younger looking than the artist's conception rendered for the cover (see pic at left).

We have pretty women murder victims in no less than four of the American cases, one a secretary at Pennsylvania's Franklin & Marshall College, one a high school student in the New Jersey factory town of Millville, one a wealthy Buffalo, New York housewife and one a high schooler--this one engaged to be married--from suburban Chicago.

The most interesting of these was the Millville murder, because the young man convicted was mentally impaired and may have been innocent, the author suggests. Certainly there would have been grave problems with his "confession" today.

The most classical of the American murders was a murder for gain perpetrated by another woman, this one a "wife from hell" from suburban Los Angeles.  The victim was shot down in his own house. Police soon focused on the wife from whom he had recently separated, but she seemed to have an alibi.

Like so many fictional slayers, she claimed at the time of the murder to have been seeing a movie. In this case the film was, appropriately enough, a little B crime movie, Decoy, starring Jean Gillie as one of the most fiendish femme fatales in cinema history.


In another American case, a war bride provided the motive for the murder, the shooting of Harold Mast, a Medina, Ohio veteran.  There's also a race track killing.

For the most classical murder Radin had to go to another country, Sweden, for a case involving poisoned chocolates. Who put the arsenic in the candies?  Could it have been the college student who had recently directed a performance of Arsenic and Old Lace?

Even with this chocolates murder, however, Headline Crimes of the Year inevitably will disappoint students of murder as a fine art.  There's nothing here to compare with the great cases of Edmund Pearson and William Roughead, and I call that shocking!
Posted by The Passing Tramp at 3:33 PM