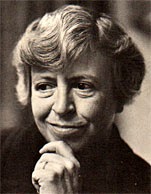 Crime fiction writer Dorothy Salisbury Davis passed away this week at the age of 98.  One of the most notable mid-twentieth-century American crime writers, she published an impressive opening trio of crime novels: The Judas Cat (1949), The Clay Hand (1950) and A Gentle Murderer (1951).  John Norris of Pretty Sinister Books has reviewed the first and third of these books, so I thought I would try my own hand at the middle one, The Clay Hand, which was reprinted in Collier Books' Mystery Classics Series in 1963, with an introduction by Anthony Boucher, who declared the novel a masterpiece of American mystery regionalism.

Sarah Weinman, who included a Davis short story in her recent anthology of short fiction by women suspense writers, Troubled Daughters, Twisted Wives, on her blog reprinted an interesting 1959 interview with Davis, in which the author opined about the differences between male and female mystery readers. Her views reflect the meteoric rise in popularity after the Second World War of hard-boiled fiction, to which Davis herself seems not much attracted:

Women find in what I call the "mystery of manners" what they once found in romantic novels--the kind of world that hardly exists anymore.  Someone I like once said to [mystery writer] Ruth Fenisong, "I like your stories because they have servants in them." That about sums it up....Men [mystery readers] seem to find excitement in a sequence of violent action. Whereas women like to read about gentlemen, which they don't find in paperback fiction and possibly not in real life either....Most literate mysteries are written by Englishmen or women.

While I don't know whether that's quite fair to the American hard-boiled school (weren't Raymond Chandler and Ross Macdonald, both active in the 1950s, writing "literate mysteries"?), Davis no doubt wrote her goodly share of crime tales that have the virtues of "mainstream" literature.  I will have my review of The Clay Hand up this weekend.
Posted by The Passing Tramp at 12:08 AM