The Missing Queen and Other Mysteries of Genre History: The Cambridge Companion to American Crime Fiction (2010)

The Cambridge Companion to American Crime Fiction is a book of fewer than 200 pages with fourteen essays, including an four-page introduction by editor Catherine Ross Nickerson.  The other essays, all ranging from 8 to 15 pages, that follow Nickerson's introduction are: 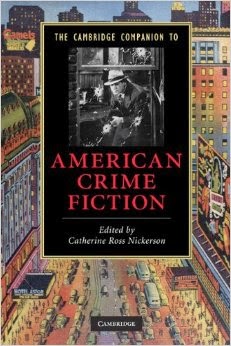 There is lots here about hard-boiled, noir, police procedural, gender and race, as one would expected from a modern academic survey of American crime fiction.

In the "American Crime Fiction Chronology" given at the beginning of the book, fifteen works, chosen to reflect the content of the essays, are listed as milestones for the period 1841 to 1939:

A clear pattern can be discerned in this material:

Going strictly by this outline one would conclude that American men after Poe gave little to the detective fiction genre, outside of hard-boiled and juvenile mystery. The only male authors of classical detective fiction listed for the near century between the appearances of "Rue Morgue" and The Big Sleep are the creators of Philo Vance and Charlie Chan.

When we look at the actual text of the essays themselves, even Van Dine and Biggers don't come out so well.

On page 29 he is again dismissed, as an imitator of Agatha Christie.

On page 43 he is called an imitator of Arthur Conan Doyle and used as the usual hard-boiled punching bag for not writing about "reality" (though interestingly he is deemed "the era's most popular writer").

On page 136 it is claimed that his novel The Benson Murder Case is "widely acknowledged as the first American clue-puzzle mystery."

Earl Derr Biggers gets one lone mention, on account of having created an ethnic detective (see "Race and American Crime Fiction").

Of course at least Van Dine and Biggers are mentioned.  The hugely popular and admired Rex Stout is another such fortunate fellow.

Though he missed out on the list of milestones, Stout nevertheless is mentioned in the text.

On page 47 he is noted for having cleverly merged hard-boiled and classical styles for commercial purposes.

On page 136 he is criticized, along with Van Dine, for having ignored race and gestured "more toward Europe than toward actual American cities," by writing about rich white bankers, stockbrokers and attorneys ("Race and American Crime Fiction").

On the other hand, if you are looking for anything on Melville Davisson Post, Arthur B. Reeve, Erle Stanley Gardner, John Dickson Carr--was he counted as British?--or Ellery Queen, you will search in vain (wait, Gardner is listed as the author of an article).

Meanwhile, Anna Katharine Green gets two pages, Mary Roberts Rinehart three and Mignon Eberhart, Leslie Ford and Mabel Seeley together as a trio another two (even Carolyn Wells gets a line).

The editor of the Companion, the aforementioned Catherine Ross Nickerson, is the author of The Web of Iniquity, an interesting book that is about--you may not be surprised to learn this--Metta Fuller Victor, Anna Katharine Green and Mary Roberts Rinehart.  She also authored the Companion essay "Women Writers before 1960."

In her introduction to the Companion she writes:

It is only fairly recently that the multiple genres of crime writing have been taken up as subjects of academic study; before that, they were entirely in the hands of connoisseurs and collectors, with their endless taxonomies, lists and value judgments.  What Chandler opened up was a new way of looking at crime narratives, or rather looking through them, as lenses on the culture and history of the United States.

All well and good--though Nickerson sure seemed to be making a "value judgment" about Futrelle--and anyone familiar (alas! too few!) with my Masters of the Humdrum Mystery, Clues and Corpses or various blog articles knows that I too am very interested in mining detective fiction for what it may tell us about cultural history.  But it seems to me that the book Nickerson edited too often looks not through American crime fiction, but past it--past it, that is, when the crime fiction does not fit preconceived and circular notions of what American crime fiction is.

According to Nickerson there were two indigenous creative strains in American mystery: the female domestic novel/female Gothic (the English Bronte sisters and Mary Elizabeth Braddon are admitted as influences here, but not Wilkie Collins or Sheridan Le Fanu) and the male hard-boiled/noir.

So the result is Leslie Ford, for example, but no Ellery Queen.  Ellery Queen is the American detective story, Anthony Boucher once wrote--but then I suppose Boucher was just one of those mere connoisseurs and collectors.  What did he know?

Note: This piece is a revision of an article originally written for Steve Lewis' Mystery*File. Looking back at it now, I see that I should have noted that the Companion overlooks Phoebe Atwood Taylor, Craig Rice, Elizabeth Daly, Helen McCloy, Helen Reilly, Cornell Woolrich and most mid-century American women suspense writers as well. I have a feeling that the latter omission won't be happening again in any future edition of the Companion (these women suspense writers are coming soon to the Library of America).

For more of my genre literature encounters with Catherine Ross Nickerson, connoisseurs and collectors, see my Mabel Seeley's Murders in Minnesota, Part One and Part Two.

Also you can use the search box to check out the numerous past posts I have made on Leslie Ford, Mignon Eberhart, Mary Roberts Rinehart, Carolyn Wells, Phoebe Atwood Taylor, Craig Rice, Elizabeth Daly, Helen McCloy, Helen Reilly and, yes, even Ellery Queen.  Check out the posts on Rufus King, Patrick Quentin, Cornell Woolrich, Hugh Austin, George Bellairs and Todd Downing too.  Those guys were no slouches either.
Posted by The Passing Tramp at 1:41 AM