Found Drowned? The Man from the River (1928), by GDH and Margaret Cole (mostly GDH)

Below is pictured the dust jacket of The Man from the River, the 1928 detective novel by the mystery-writing English couple GDH and Margaret Cole--one of the finest dust jackets for a Golden Age mystery in my view.  How is the novel itself? 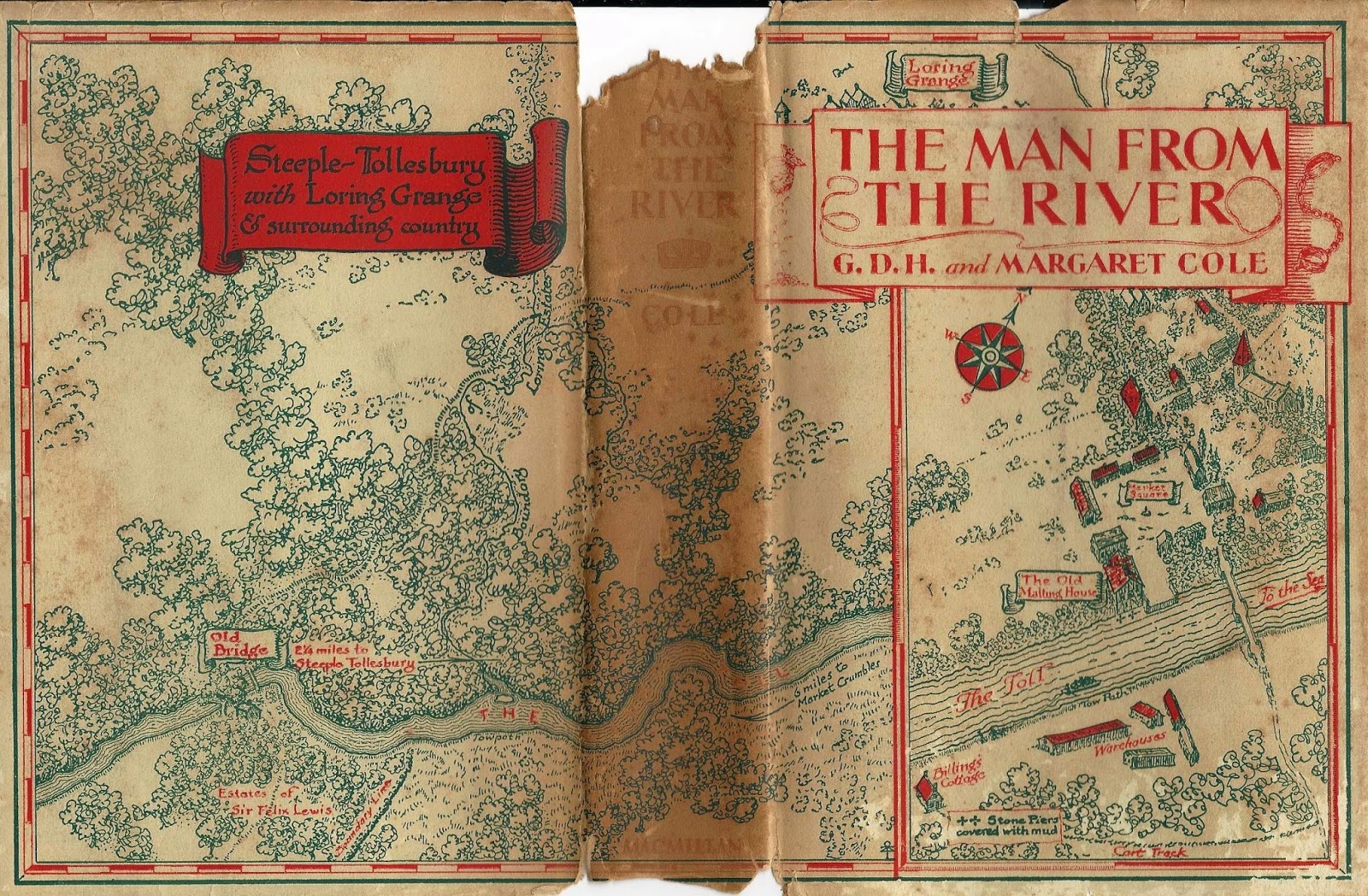 In The Man from the River Dr. Michael Prendergast is on vacation in the quaintly decayed Essex village of Steeple Tollesbury, outside Colchester, awaiting the arrival of his clever policeman friend, Superintendent Henry Wilson of Scotland Yard (Mrs. Wilson is nowhere in evidence in this one). Two later Coles novels also pair Wilson with his sometime Watson, Dr. Prendergast, as do some Coles short stories.

Before Wilson's arrival to join Prendergast at The Old Malting House, a corpse is fished out of the River Toll.  Foul play is suspected--but just how was the corpse done to death?  The dead man is William Meston, a partner in a Colchester brokerage firm.  It turns out that there are quite a few people who might have wanted Weston dead, for motives both financial (there seem to have business shenanigans going on in the brokerage firm) and amorous (Weston's beautiful wife, Sylvia, had recently left her husband to stay with relations at nearby Loring Grange--see map--where she had a great many male admirers).

Local law enforcement being a bunch of nitwits, they are soon relying heavily on the informal aid of the vacationing Wilson, who in turn informally allows his minion Prendergast to do some investigative leg work for him and to sit in on all his interviews with witnesses and suspects. Golden Age crime writers tended to be rather casual about this sort of thing in the 1920s, don't you know.


Critics Jacques Barzun and Wendell Hertig Taylor liked the plot of The Man from the River, but thought the approach too whimsical and discursive. There is a somewhat facetious tone to the proceedings that detracts from the book, in my view, although this ultimately is a matter of personal taste.  But the plot is a rich and complex, with the authors (primarily, with this one, GDH Cole) impressively juggling some two dozen characters.*

*(a list of the characters to go with the wonderful endpaper map would have been nice, especially since some of the names are similar: William Meston, Mark Warden, Wallace Burden).

The last third of the book, when the investigation begins really to focus, is quite good and the solution clever and surprising. The Man from the River is, all in all, a fine example of a twenties English village mystery: a bit flippant, perhaps, but oh! so clever.  Sadly, it is out-of-print, like the other Coles detective novels.

GDH and Margaret Cole were prominent twentieth-century English intellectuals and socialists who over a period of some twenty years in the 1920s, 1930s and 1940s published close to three dozen detective novels and novellas/novelettes, as well as nearly three dozen mystery short stories.  GDH, or Douglas, Cole probably wrote eighteen of the twenty-eight novels, and Margaret ten.

The majority of these works concern the exploits of their character Superintendent Henry Wilson, who, like Freeman Wills Crofts' Inspector French, was one of the most prominent Golden Age fictional police detectives.  For more on the Coles' detective fiction see my forthcoming book The Spectrum of English Murder.

Posted by The Passing Tramp at 4:45 AM