A Sticky Wicket in Scotland: Double, Double, Oil and Trouble (1978), by Emma Lathen 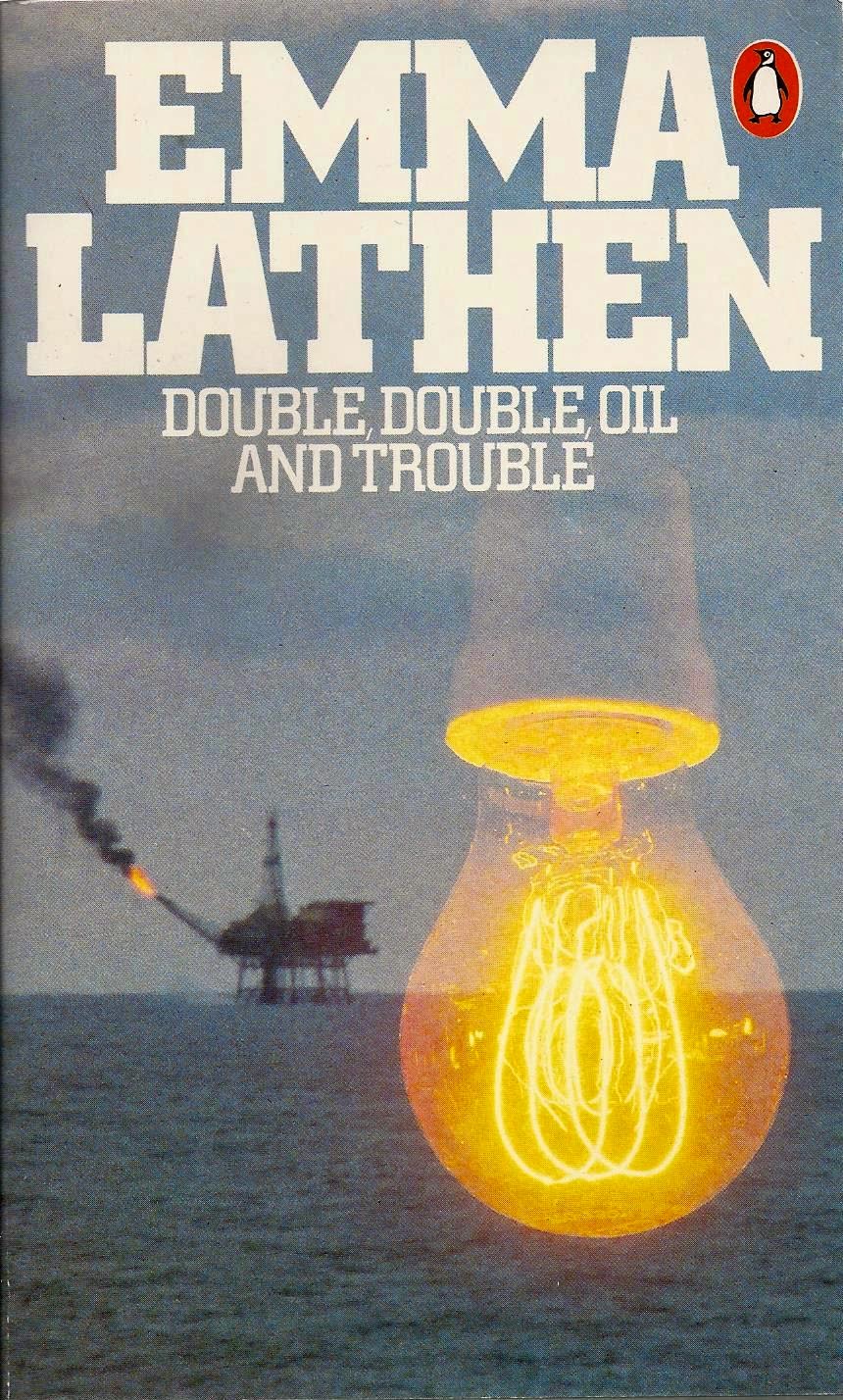 Nineteen Thatcher detective novels appeared between 1961 and 1982, then, after a fallow interval of a half-dozen years, five more between 1988 and 1997, the year of Latsis' death (Henissart then discontinued the series, even though an additional Thatcher novel reportedly had been 80% completed at the time).

The Thatcher mysteries surely constitute one of the most notable series of twentieth-century American detective novels, although they are out-of-print today (Latsis and Henissart also had another, more short-lived, mystery series, with an American congressman as sleuth; the two women produced seven of these mysteries, written under the name R. B. Dominic, between 1968 and 1983).

The Lathen Thatcher detective novels I have read all have been crisply and delightfully written, with considerable dry wit about business life exhibited. Typically in each Thatcher novel Lathen tackles a specific business with which the senior Sloan Vice President, in his capacity as head of Sloan's trust department, is currently involved.  During the course of cutthroat financial transactions, someone invariably gets bumped off and it takes the keen-eyed Thatcher to spot the culprit. The plots in the Lathens I have read have been uniformly excellent.  The mysteries are fairly clued, cogent and credible and the books include much fascinating business detail.

In some ways, Lathen reminds me of Golden Age British "Humdrum" mystery writers, particularly John Street, who also was involved with, and interested in, business, though Lathen is much more sophisticated and detailed in her presentation of business institutions and Lathen's dry humor is exceptional within the mystery genre (indeed, on account of the latter quality admirers have compared Emma Lathen to Jane Austen; interestingly, she was long enthusiastically championed by the notable British publisher Gollancz).

Lathen's seventeenth Thatcher novel, Double, Double, Oil and Trouble (1978), is a good example of the author's talents, though it is more of a globetrotting tale than many of her books.  Events are driven by competition between two construction firms, Macklin of Houston, Texas and Norddeutsche Werke GmbH (NWG) of Hamburg, Germany, for a contract to build "a billion facility in north Scotland," at Noss Head, involving "tanker berths, onshore pumping stations, and pipelines to outrun the imagination of man."  Other firms from around the world are involved too, but these two are the favorites.


During the height of the competition Davidson Wyle, Macklin's European manager, is grabbed by armed men in Istanbul, purportedly by a terrorist group ironically named Black Tuesday.  A 1.5 million ransom drop is demanded, and Thatcher is one of the people involved in this transaction.

Wylie is not returned when he was supposed to be after the ransom was made, and there are fears for his life; but happily after several weeks he does reappear, alive.  He is whisked back to Houston by Macklin, but there, as Interpol descends to interview him about the kidnapping, about which there are still unsettled questions, he is killed when his car explodes.

The car explosion was no accident.  So who killed Wylie?  Terrorists who thought he might give them away?  Or could he have faked the kidnapping to get the ransom and then been eliminated by confederates in the plot?  What does his beautiful Italian wife, Francesca--whom he was in the process of divorcing--know about all this?


Eventually Thatcher solves the case, but not before more travel mileage is chalked up--there are trips to London and the construction site at Noss Head--and another death occurs.  The solution is fairly clued, quite interesting and all-too-plausible.  Along the way, the reader can also savor Lathen's sardonic writing, full of keen observation on the situation of the world in 1978.

Some of my favorite passages had to do with the indomitably conscientious do-gooder Roberta Ore Simpson, descended from Quakers and fired with zeal to stamp out corporate wickedness:

Some women in public life are invariably known by three names.  Occasionally this designation provides continuity for a career begun under a maiden name and continued after marriage.  More often it serves as a warning to the uinitiated that the lady's claim to fame rests on the grandeur of her own family rather than on her consort.  But sometimes the polysyllabic mouthful signals the inadequacy of the English language.  Under certain circumstances "Mrs." and "Miss" can be grotesquely inappropriate while "Professor" and "Doctor" are irrelevant.

The Lathen novels invariably offer fascinating historical and cultural snapshots of their times.  One such, as indicated above, is the role of women in business and public life (still a way to go in this novel, though changes are taking place). Another concerns, naturally enough, the oil business:

OPEC, Thatcher suspected, wanted to illustrate the distinction between promise and achievement. Just as every oil well, before it is drilled, is going to be the biggest gusher ever seen, so North Sea oil might become the bonanza of bonanzas.  Yields might outstrip those of the Persian Gulf, Europe might dispense with the Emirates, and world energy prices might plummet.

But, in the meantime, OPEC was doing very well, and they had decided to prove it.

Then there's this pithy observation on the influence of television news anchors: "He might accuse his wife of overdramatizing, but Walter Cronkite?"


And then this exchange between two policemen in Houston, discussing where the dynamite that destroyed Wyle's car might have been obtained by the terrorist group Black Tuesday:

"All that construction.  There's probably dynamite lying around on every [street] corner....Unless terrorists always carry their own brand with them."

"They would have had to come through Customs and Immigration at the airport....

"Ha! We've got over four million illegal Mexican immigrants.  Do you think they would have noticed a couple of Arabs?"

I strongly recommend the Emma Lathen detective novels to you if you have never read them.  Every time I read one I find a pleasing mystery and I feel I'm learning about an interesting place and time in world history.  I only wish Emma Lathen had been able to continue writing mysteries for another dozen years or so, up to the rise of the Occupy movement.  Death Is Occupied would have made a great Emma Lathen mystery title!
Posted by The Passing Tramp at 2:21 PM