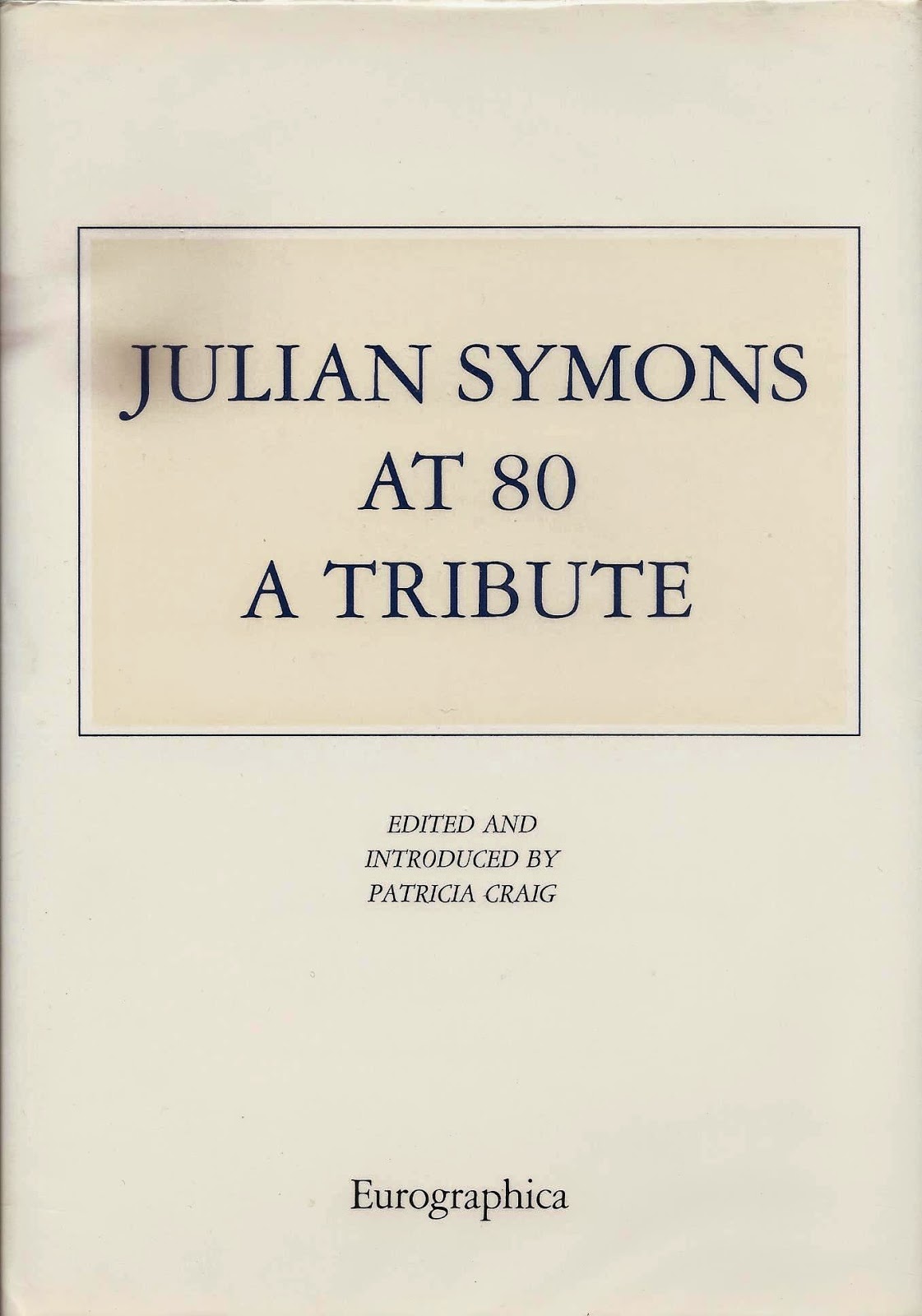 In 1992 Patricia Craig edited Julian Symons at Eighty: A Tribute, a collection of pieces in honor of the eightieth birthday of the great British crime writer and critic Julian Symons. There are original stories by Reginald Hill, Edward D. Hoch, Thomas Narcejac, Elizabeth Ferrars, poems by others (Symons was no mean poet) and also some essays, ranging from the incidental--a 200-word piece by Patricia Highsmith that reads like it was dashed off thirty minutes before deadline--to substantive: pieces by HRF Keating, a good friend of Symons, and Nicolas Freeling (1927-2003). Keating's piece, on Symons' critical writing, is characteristically charming, while Freeling's, "Gaudy Night in 1935," is surprisingly (or is it characteristic too?) caustic.

Julian Symons of course could be a tough critic himself, but he often found much of worth in Golden Age detective fiction.  Freeling, a crime writer very much of the modern school (indeed, his Guardian obituary, linked above, questions whether he was really a crime writer at all), found nothing of worth in the Golden Age, except some of the works of Dorothy L. Sayers, especially Gaudy Night, which he praised, with some qualifications, at length, referring to it in passing, incidentally, as a "locked-room mystery" (ironically, Symons himself did not like Gaudy Night, much to the future horror, as we know, of the book-stamping Lucy Worsley).


Of the Golden Age and Gaudy Night Freeling writes:

In these years the writers of detective-stories proliferated.  They sold enormously, were thought intellectually respectable, and thought a great deal of themselves.  They are all unreadable; the great thing was to devise a new exotic method of killing people and without the killer being at once guessed. Sixty years have passed and point to a paradox: two survivors of this time, constantly reprinted, are Agatha Christie and Dorothy Sayers. If the first is the darling of Hungarian students learning English, the second is reread and loved.  This phenomenon is often ascribed to snobbery, Lord Peter Wimsey being a pleasantly Woosterish figure (does anyone under sixty read Wodehouse?), but the explanation does not satisfy me.  Gaudy Night is arguably, to myself evidently, Sayers's best book. Wimsey appears only in the second half.  Indeed it is not a "detective story" and makes only a superficial pretence of being so....

Instead, it is a serious book, seriously written.....never a common combination, arguably unique in the crime-writing of the twenties and thirties in English-speaking countries....

Freeling also likes The Nine Tailors ("a sunny, happy work of immense charm"), is dismissive of Strong Poison ("undistinguished" except for its introduction of Harriet Vane, "a character full of vigor, struggling for life") and The Documents in the Case ("awkward" and "slight") and hates The Five Red Herrings and Have His Carcase ("alarmingly dull, conventional stodge, full of fingerprints and timetables"). 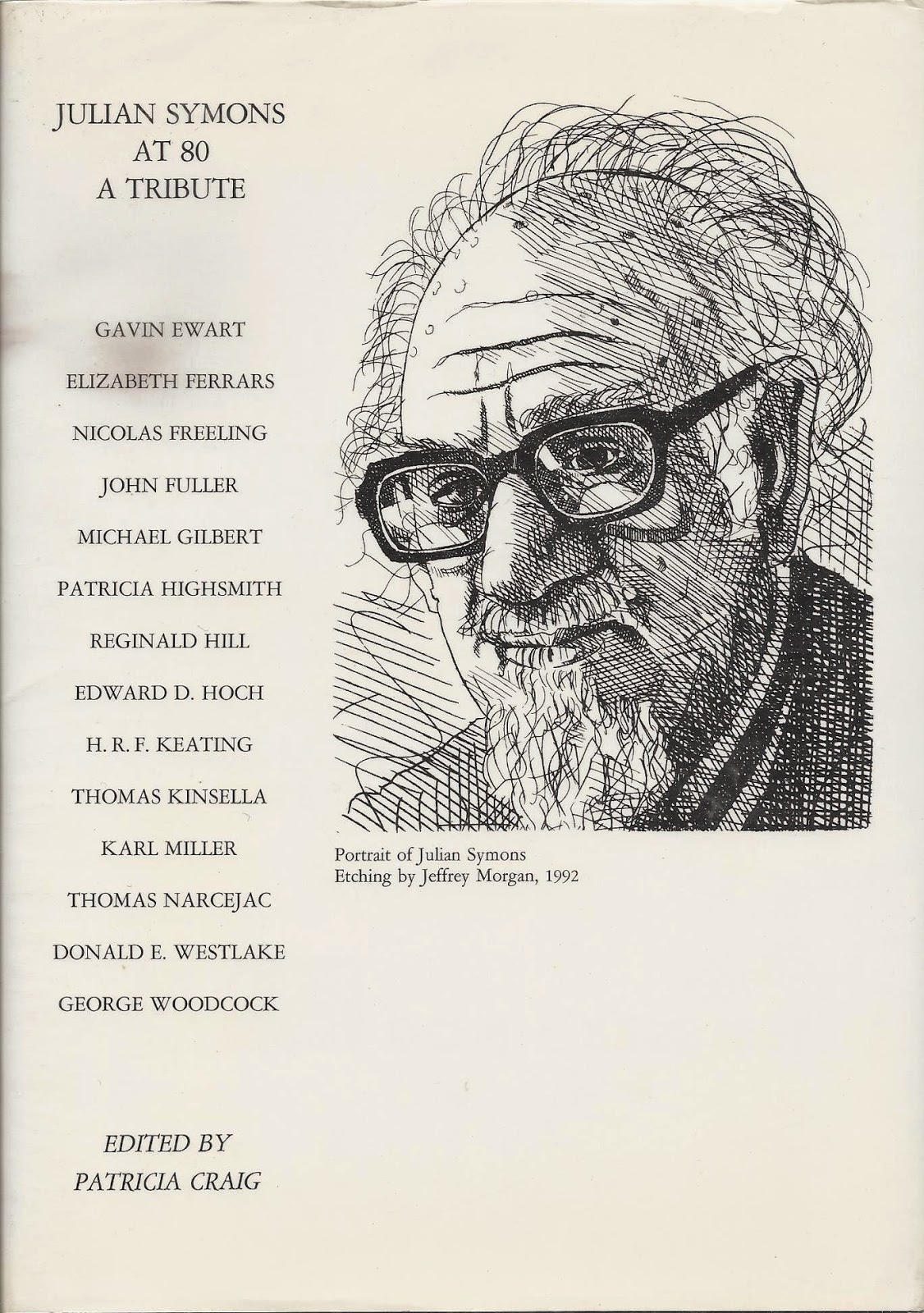 Freeling also contrasts Gaudy Night with The Tiger in the Smoke by Margery Allingham, "a writer then highly thought of." I think both Tiger and Allingham were still pretty well thought of in 1992, but never mind, Freeling does not like the book or its author:

The Tiger in the Smoke was successfully published as late as 1952, so unwilling was the lending-library public to abandon Edwardian notions of bourgeois comfort. It is deplorable trash, notable for perfect fidelity to the Sayers pattern of thirty years before. There is an aristocrat-detective, Wimsey-and-pee, and a comic manservant far worse than Bunter, called Magersfontein Lugg. There's a kindly old vicar, and a redhaired beauty called Amanda from a Good Family. To sound Holmesian there's a lot about fog; street musicians talking fake cockney; a Scotland Yard man, very tough but properly subservient to the upper classes; and a preposterous theatrical villain. Everything is Rather-Frightening, and the result is flim-flam.

On the other hand, there is grit in a Sayers composition....


Freeling cites as one example of Sayers' rare "grit" "the lesbian nurse in Whose Body?" I think he means Unnatural Death, but that's hardly the only point with which I find occasion to disagree in this essay.  What about you?

I wonder what Julian Symons thought of "Gaudy Night in 1935"?  Symons himself liked The Tiger in the Smoke, calling it the best of Allingham's books, "a thriller of the highest quality about a hunted man and his hunters." And Gaudy Night he thought a dull novel "full of the most tedious pseudo-serious chat between the characters that goes on for page after page."

Had Freeling ever actually read Symons' crime criticism opus, Bloody Murder?  If he had, he certainly did not let the book constrain in his tribute essay his own critical judgments, which were rather different in particulars from those originally made by Symons two decades earlier.
Posted by The Passing Tramp at 3:55 PM