Today is the seventieth birthday of Douglas G. Greene, the great American crime fiction scholar who, among his many other accomplishments, published the seminal John Dickson Carr biography, John Dickson Carr: The Man Who Explained Miracles (1995) and founded the mystery short fiction publishing house Crippen & Landru.

Over 2013 and 2014 I happily was able to shepherd into print Mysteries Unlocked: Essays in Honor of Douglas G. Greene, a collection of two dozen essays on detective fiction, in honor of Doug and his important work, published by McFarland Press. 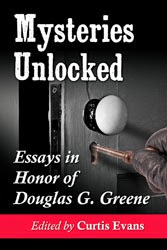 Doug's work over the decades has illustrated the richness of crime fiction from the gaslight era to the present time.

Although often today twentieth-century crime fiction is simplified as a dichotomous conflict between masculine American hard-boiled/noir and feminine British cozy/clue puzzle (and there are frequently unjustly dismissive attitudes toward the latter), Doug's ventures in both genre history and publishing have illustrated otherwise, that our mystery past in fact was so much more complex and rich.  I think the essays in Mysteries Unlocked do the same.

I wish you a most happy birthday, Doug, and I thank you for all you have given us!

Coming up for Friday is a review of the latest publication of Crippen & Landru, Night Call, a new collection of short fiction by the great crime writer Charlotte Armstrong (1905-1969).

For more on Mysteries Unlocked, see here and here.
Posted by The Passing Tramp at 1:21 AM