She raised her eyes.
"That is how men love me....Suddenly--like a gale." 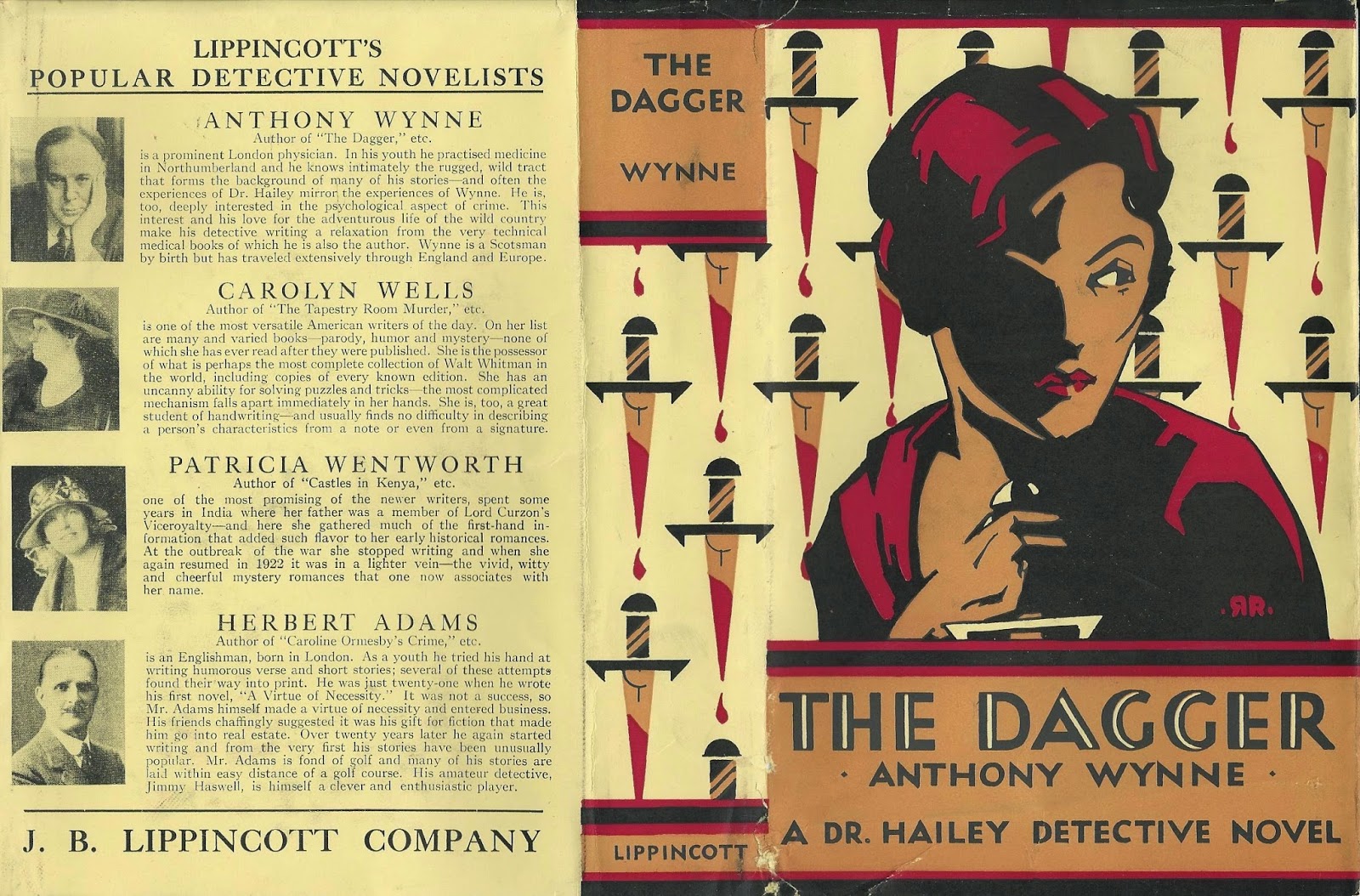 Having been thinking a good bit about "pulp fiction" this week, I was struck by how in its more circumspect British way Anthony Wynne's detective novel The Dagger (1928) resembles what people usually think of as "pulp."

In the novel there's a striking character at the center of events, a disturbed Apache dancer named Muriel Deans, "in whose own breast," the dust jacket blurb of the American edition dramatically tells us, "lay a dagger more deadly than any weapon of steel...."

I love the stylized jacket of the American edition of The Dagger, which depicts a sinister and sexy Deans with this deadly weapon in her hand; but I couldn't help thinking how well this design could have been updated to the mean streets realism of post-war paperback "pulp" art, when classic sleaze cover illustrations enjoyed their heyday--though perhaps the title would have been changed to something like The Derringer.

Anthony Wynne in fact was published in the pulps in the 1920s (both short stories and serialized novels), along with other British mystery writers not normally seen as "pulp" fare today, such as Agatha Christie and J. S. Fletcher--though by the 1930s Christie had moved on to more lucrative slicks. However in the United States Wynne was never warmly embraced by paperback publishers. (I'm only aware of one American paperback edition of a Wynne novel, from 1942, and it was not a major edition.)

Indeed, while all of Wynne's first two dozen books of crime fiction--23 novels and a short story collection, Sinners Go Secretly--were published in the United States between 1925 and 1939 by Lippincott, who also published the redoubtable traditionalist mystery writers Patricia Wentworth and Carolyn Wells, I believe only one of Wynne's last four novels, which appeared between 1940 and 1950, was taken up by an American publisher, and this publisher a relatively minor one.

So Wynne was abandoned in the United States just at the time paperback fiction was ascending. (In the mid-1930s, Wynne's political views began to intrude into his novels, slowing down the narratives--see my review of his Death of a Banker--and this missionary zeal on the author's part may have reduced his popularity in the United States.)

Although Wynne was never really able to participate in the paperback revolution, many of his mysteries, with their considerable melodramatic content, would have been well-suited to lurid paperback cover art of the 1940s and 1950s.  Certainly this is true of The Dagger, which tells of the plague of murders that afflicts the Dangerfields, a family of ancient Northumbrian gentry stock, when Muriel Deans, scion John Dangerfield's first wife--believed for a year to have been been drowned off the coast of southern England--resurfaces, most unpleasantly alive. John's father, Sir Magnus, promptly disappears, and the disfigured body of an elderly man, both his hands severed, is found in the neighborhood--but is it or is it not Sir Magnus?

Soon additional mutilated corpses are cropping up, with alarming frequency.  Could Muriel Deans be the culprit?  But her interest seems to be blackmail, not murder. (John Dangerfield inadvertently committed bigamy by marrying again.) Muriel, however, has quite a seamy past, what with her vocation as an Apache dancer and her association with some rather violent and unsavory characters....


Admittedly, Anthony Wynne's prose is rather stodgy, but The Dagger reads like a Victorian sensation novel updated to the Jazz Age. (I think it could film wonderfully.) Moreover Wynne and his sleuth, Dr. Hailey, are clearly interested not just in the puzzle (which, though lacking one of Wynne's customary locked room problems, is interesting), but in psychology as well. Of the main characters in The Dagger only Muriel Deans really draws the breath of real life, but she has a vivid enough presence to brighten the cardboard figures around her.

One censorious contemporary English reviewer of the novel primly avowed "we like our detective fiction to be of rather less gory a type than is here presented in a narrative of not one but a number of violent crimes:"; but I would say that The Dagger left its mark on me.
Posted by The Passing Tramp at 2:35 AM