Other people die of mumps,
Or general decay,
Of fever, chills or others ills
But Wilders walk away. 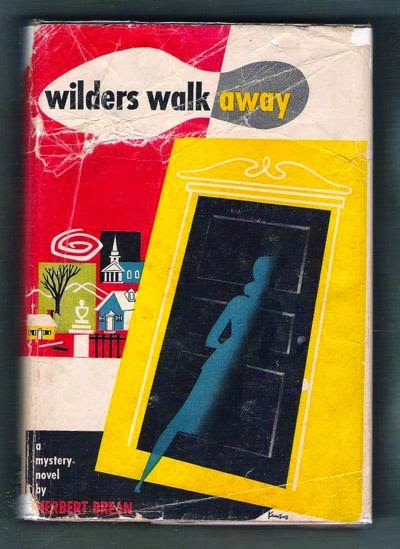 Herbert Brean's first crime novel, Wilders Walk Away (1948), was tremendously praised by the mystery fiction critic Anthony Boucher, and it's not hard to see why: it reads like a fusion of Ellery Queen and John Dickson Carr, probably Boucher's two favorite mystery authors.

Wilders must have seemed to Boucher like a blessed return to the great days of the Golden Age. Probably in no small part due to the hugely influential Boucher's praise, Wilders almost walked away with an Edgar, for the best first mystery novel of 1948.*

*(it lost to Mildred Davis' The Room Upstairs)

Though it falls short of the great masterpieces of classic miracle crime fiction, Wilders is a good mystery tale, blending the small town New England atmosphere of Ellery Queen's Wrightsville novels with the antiquarianism and miracle problems with which John Dickson Carr is so strongly associated (scattered throughout Wilders there are even footnotes, reminiscent of earlier Carr novels like The Crooked Hinge and The Reader Is Warned).

The story opens with freelance journalist Reynold Frame arriving in Wilders Lane, Vermont, one of those perfectly-preserved New England towns where most of the structures date back to the eighteenth century. He's planning a photo story on the town for a big national magazine (one assumes something like Life, for which Brean himself did many articles).  Once there, however, Reynold soon finds himself embroiled in a mystery--or, to be precise, a whole host of mysteries!

It seems the town's most prominent family--the Wilders, naturally--has a history of highly mysterious vanishings.  So prominent has this history been that a Lizzie Borden-like jingle to describe the phenomenon has arisen (see above).  One Wilder even was among the ten people who vanished in 1872 from the infamous real life ship the Mary Celeste--which is really going something extra!

Reynold Frame just happens to be a paying guest at the home of Constance Wilder, whose father vanished from the town a year earlier. On the very day Reynold arrives, Constance's sister vanishes as well. Other vanishings follow, and eventually dead bodies start appearing. Reynold keeps quite busy working on the story he came there for in the first place, as well as solving mysteries past and present and perhaps even winning the heart of the rather imperious Constance (she won't call him by his first name until over the half the book is over).

The appeal of this novel to any fan of John Dickson Carr and Ellery Queen is obvious, though ultimately it doesn't quite live up to the best works of the masters, in my view.

Basic plotting imperatives early on suggest to readers the identity of the fiendish culprit of the present crimes, even before they have the chance the deduce the solution from the clues that are (quite fairly) provided. Reynold Frame solves three miracle problems from the past--all Wilder vanishings--but the solutions are not up to complexity of the Carr brand (indeed, one of them seemingly invokes not Carr but rather Carolyn Wells).

The solution of the modern-day crimes stretches plausibility in the manner of Golden Age Baroque style, but if you're a fan of this kind of mystery I doubt you will complain much. Unlike PD James, say, you will admire the ingenuity of a mystery more than the strict credibility of its explanation.

For me the best elements of Wilders Walk Away are the New England local color and the enticing way in which Brean weaves the Wilder legend into the story.  It really does feel like some bizarre regional folklore (in the book Brean indicates that he was quite familiar with Charles Fort, the great expert in what has been termed "anomalous phenomena").

Brean is more interested in regional antiquarianism than the supernatural per se (his footnotes deal with such things as New England antiques and recipes), so at times one is more reminded of a non-zany Phoebe Atwood Taylor than John Dickson Carr; but fortunately I like Taylor too!  I will read more by Herbert Brean (1907-1973), who published three additional Reynold Frame mysteries in the 1950s, as well as, after he halted the Reynold Frame series, three non-series crime novels, the last of which appeared in 1966.

By the way, although Reynold Frame solves some half-dozen or more mysteries during the course of the events in Wilders Walk Away, regrettably he leaves unsolved the Mary Celeste affair.  Darn.

I wish American readers a Happy Thanksgiving and I assure everyone that I will be back with a new blog review for Friday, no matter how lethargic I may feel by then!
Posted by The Passing Tramp at 2:53 PM