With striking coincidence the crime writers PD James and Ruth Rendell passed away within less than six months of each other, the more politically right James on Thanksgiving Day, 2014, and the more politically left Rendell within a few hours of May Day, just a couple of days ago. (Rendell was hit with her stroke on January 7, less than six weeks after James's death.)

Since the 1970s, James and Rendell routinely have been dubbed England's Queens of Crime, the successors to the Golden Age monarchs Agatha Christie and Dorothy L. Sayers (and, in most accounts, Margery Allingham and Ngaio Marsh).  You will know the phrase, "the Queen is dead, long live the Queen"--but do James and Rendell actually have successors into today's British crime fiction world?  Are there two UK women detective fiction writers who tower over their contemporaries the way these past Crime Queens are seen as having done? 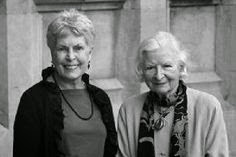 To be sure, there were pretenders to the thrones of the Golden Age Crime Queens. The Golden Age of Detective Fiction, the period traditionally defined as around 1920-1939--though some have urged extending it though the Second World World War or even into the early 1950s--in England came to be dominated, in memory if not necessarily in absolute fact, by four "Crime Queens": you know the drill--Agatha Christie, Dorothy L. Sayers, Margery Allingham and Ngaio Marsh.  In a play on the schoolhouse vowel mnemonic A-E-I-O-U, and sometimes Y, I like to call this C-S-A-M, and sometimes Tey.

Although Josephine Tey these days arguably is the most critically-praised of these women writers, it is hard for me to accept Tey as a true Golden Age Crime Queen, in part because she only published two detective novels during the period, as traditionally defined, one under  the pseudonym Gordon Daviot, the name under which she published her mainstream novels and plays, including her great stage success Richard of Bordeaux.  No one back in 1939 would have included "Josephine Tey" as a "Queen of Crime," although Tey's mystery novel A Shilling for Candles (1936) intriguingly was adapted--or, more accurately, almost entirely reimagined--by Alfred Hitchcock and his screenwriters as the film Young and Innocent.

Georgette Heyer and Gladys Mitchell are sometimes advanced as Golden Age Crime Queens, but they have never quite made it into this queenly company. (Heyer's mysteries were, with one exception, plotted by her husband, while the distinctly eccentric Mitchell, whom I personally greatly enjoy, has always been something of an acquired taste, even among Golden Age English mystery fans.)  The name of Patricia Wentworth also comes to mind, but her Golden Age output consisted primarily of mysteries that are more thrillers than classic detection. (Additionally her Miss Silver detective novels, for which she is best-known today, some dismiss as "cozies" that don't rise to the level of the other works of the Crime Queens.) 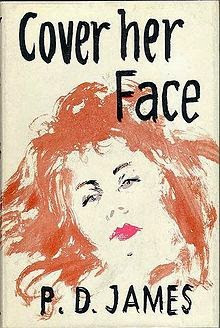 If we extend the Golden Age from 1920 to, say, 1945, followed by a sort of Silver Age of Detective Fiction, let's say 1946 to 1985, where detection-focused mysteries increasingly had to compete with other modes of mystery fiction, we see James and Rendell emerging on the scene in the middle of that period, with the classical debut detective novels Cover Her Face (1962) and From Doon with Death (1964), and definitely moving away from the strict puzzle form in the later 1970s and the 1980s.

James exiled her most famous series detective, Commander Adam Dalgliesh, for nine years, after Death of an Expert Witness (1977), producing only two crime novels in the interim, Innocent Blood (1980), a bestselling non-series suspense thriller that made James' name in the US, and The Skull Beneath the Skin (1982), a sort of modern Gothic pastiche with James's second-string "girl sleuth," Cordelia Grey (abandoned after this book). In 1986 appeared James' A Taste for Death, a sprawling Dalgliesh detective novel that set the pattern for all her later mysteries, which evinced more interest on the part of the author in heavy narrative detail about characters and setting than in fleet-footed plotting ingenuity.

During this period it seems to me that James's commitment to the "classic," puzzle-focused Golden Age detective novel became more a matter of trappings than substance. We have the the elements people often associate with Golden Age mystery--closed settings, elite suspects, detailed investigations and great deference paid to the Queen's English--but of the nine James mysteries published between 1986 and 2011, is there one with a really memorable puzzle plot? 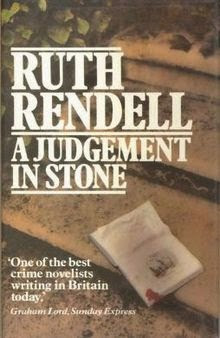 For her part, Ruth Rendell, with the publication of A Demon in My View (1976) and A Judgment in Stone (1977), began increasingly shifting away from classical detection to the psychological crime novel (what I am now seeing termed "domestic noir").  1986 also was a hugely important, transformative year for Rendell's work, in that Rendell that year launched her "Barbara Vine" mysteries, dense and rich works that recall Victorian sensation novels.

Rendell's Wexford novels got squeezed not only by these massive Vines, but by the "psychological" Rendells. Additionally, in the Wexfords themselves the puzzle plots were pushed aside to some extent by Rendell's increasing preoccupation with social issues (many of the later Wexfords explore at length such societal problems as racism, poverty, environmentalism and the abuse of women).

Probably no pair of English crime writers reflects the changes occurring in the world of British crime fiction from the 1960s to the 1980s better than James and Rendell.  Other writers could be added, of course, such as Margaret Yorke (1924-2012), who in the 1970s abandoned fair play detective fiction for the psychological suspense novel, and Reginald Hill (1936-2012), whose detective novels beginning in the late 1980s came more and more to resemble mainstream novels (though Hill in his later period still managed some ingenious plots as well).

The mentioning of Yorke and Hill reminds me of other great Silver Age crime writers who have recently passed, including HRF Keating (1926-2011) and Robert Barnard (1936-2013). Happily Catherine Aird and Peter Lovesey are still writing new mysteries, but it does feel like an era is passing. In the 1990s commentators increasingly spoke of the classical detective novel with a sort of affectionate contempt, portraying it as hopelessly obsolete in an era when not only its traditional practitioners, like James and Rendell, were moving away from it, but popular younger crime writers were increasingly devoting themselves to spinning gritty, violent tales of urban noir.


When I wrote Masters of the "Humdrum" Mystery (2012), I felt very much on the defensive in arguing that we needed to take a closer look at the world of Golden Age of detective fiction and challenge the dismissive myths and legends that had risen round it. It seems now that the publishing world is more receptive to this argument, however. I hope that, as another era of crime fiction history passes, the success of publishing ventures like the British Library's classic crime collection may signal a broader re-engagment with classical detective fiction, beyond the work of the Crime Queens. I've always believed there was an audience for it, would publishers but try.  Perhaps this new interest in turn will inspire more younger crime writers to try their hands at true detection and puzzle plotting in their own work.
Posted by The Passing Tramp at 1:40 PM