Perhaps more than any British Golden Age mystery author outside those belonging to the select company of the "Crime Queens" themselves (particularly Dorothy L. Sayers), Michael Innes (1906-1994)--one of the key figures in the development of the erudite, "donnish" detective novel--epitomizes what so many people for so many decades have come to associate with Golden Age British mystery: country houses, dry wit, and lashings and lashings of learned literary allusions.

To be sure, Innes did have a tremendous fantastical streak that set him apart from most other mystery writers, especially in the earlier phases of his crime writing career.  In Inspector John Appleby mysteries like Stop Press (1939), Appleby at Ararat (1941), The Daffodil Affair and Appleby's End (1945)--which Innes' English publisher Gollancz rather insistently called detective stories--chimerical elements abound. However, at some point in Innes' career--say perhaps after the publication of Operation Pax (1951), the fantastification in Innes' crime fiction diminished, to be replaced by a more sedate sense of genteel British whimsy.

The last 15 of the 32 Appleby mysteries, published between 1962 and 1986, are for the most part genial country house affairs investigated by the now-knighted Sir John Appleby (who has retired from his lofty post as Commissioner of the Metropolitan Police), usually with his gentry wife, Judith (Raven) Appleby along for the fun.  Among this later group novels, it's probably fair to say, there are no masterpieces on par with some of Innes' preceding crime books, but as a group they afforded (and still do) a safe harbor to traditionalist mystery readers buffeted by the sheer beastliness, as many of them saw it, of modern crime fiction.

Carsons' Conspiracy (1984) is Innes' penultimate crime novel, as well as his penultimate Appleby detective novel. (It would be followed by Appleby and the Ospreys in 1986.)  Gladys Mitchell, whose last mystery, The Crozier Pharoahs, was published posthumously in 1984, was, I believe, the last Detection Club member from the 1930s to have a new book make it into print; however, had Michael Innes been living in Britain at the time--he resided in Australia between 1936 and 1946--he likely would have become a member of the Detection Club, I would imagine, in the late 1930s. (He did become a member in 1949.)  So Carson's Conspiracy, along with Appleby and the Ospreys, essentially can be seen as the final flowering of the Golden Age British detective novel, as represented by the elite group who belonged to the Detection Club in the Thirties.

Although Carson's Conspiracy was published when Innes was nearly eighty years old, it reflects none of the slackening narrative and plotting grip that is so sadly obvious in Agatha Christie's eightieth-year novel, Passenger to Frankfurt (1970)--ironically a work that in the strangeness of its subject matter, if not the competence of its composition, approaches some of the more bizarre earlier Innes novels. (It was subtitled, at her publisher's insistence, An Extravaganza.) Indeed, Carson's Conspiracy is written with the same aplomb and smooth style that characterizes Innes' earlier books.

Carson's Conspiracy concerns the dubious activities of nouveau riche businessman Carl Carson, a country house neighbor of the Applebys.  Here is a snippet of Appleby conversation concerning Carson, clearly reflecting a certain amount of distaste on their part for arriviste businessmen (to be distinguished, of course, from long-ago gentry ancestors, who naturally were pure of heart in their--gasp!--business dealings).

"He belongs, in fact, to the great entrepreneurial class."

Ouch! Interestingly both this novel and E. R. Punshon's The Dusky Hour (1937), previously reviewed here, involve questionable activities by investment advisers and the like.

Carson in fact is finding himself in increasingly hot financial water, though he manages to keep up appearances locally. He decides to take advantage of his mentally unbalanced wife, who, he is all too well aware, tells fanciful stories of a fictitious son, Robin, who, the stories go, lives in the United States.  In order to collect as much money as rapidly as possible for a flight from the country to South America, Carson decides to concoct a fake kidnapping of this nonexistent son, who supposedly is returning to England for a visit with his parents.

Thus goes the first half of the tale.  The second half deals with Sir John's amateur investigations of these goings-on and his increasing suspicions that something is not quite right here. Will the amiable able Appleby catch out the canny Carson? And just precisely what is there for Carson to be caught out having done?

I found this short novel (about 60,000 words) quite enjoyable, graced with an interesting plot and Innes' good writing.  More an inverted (or partially-inverted) mystery, it reminds me of some earlier novels by Freeman Wills Crofts and R. Austin Freeman--or, even more so, Henry Wade, an accomplished writer like Innes who possessed a powerful sense of irony.

At this late stage in his crime novels, both Innes' plots and his sentences were less complex, to be sure, but for readers desirous of a more streamlined, immediately comprehensible, Innes, this could well be an advantage. Certainly Innes' writing is still as pithy as ever:

Carson...also liked Pluckworthy because of his old school tie.  Not that the lad wore the thing; it was just that you knew at once that he had it in a drawer.

She was the sort of wife whom, in more sensible times, one had kept locked up in an attic....A woman subject to that degree of delusion simply wasn't safe.  She oughtn't to be trusted with a  carving-knife, a knitting-needle, or even a hair-pin. [Innes here reflecting Carson's rather unsentimental state of mind about his "loopy" spouse.]

....Victorian assertions of the unflawed propriety of female nudity when done in something sufficiently impenetrable and chilly white [Innes on the life-size marble statues at the Carsons' country home]. 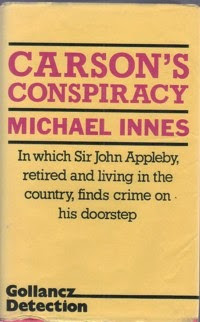 There are moments of career retrospection on Appleby's part in Carson's Conspiracy, including amusing references to Appleby's End, the novel that one might call the Ur-text of Innes' Appleby mystery fiction. (You should get this if you have read it.)  Appleby also references Dorothy L. Sayers once and Sherlock Holmes several times, as on this occasion, when he speculates to the Chief Constable on his future in detection:

Remember Mycroft Holmes, Tommy? He's Sherlock Holmes' lethargic brother. He sits at home and thinks things out, while young Sherlock scurries round in hansom cabs, or crawls about on carpets, brandishing a magnifying glass. In old age I'm going to be Mycroft. I've only just thought of it. But the decision is irrevocable.

Yet the end of the novel suggests that Appleby has thought better of this resolution.  Had Innes contemplated Carson's Conspiracy as the completion of the Appleby saga?  If so, he changed his mind and produced one more Appleby novel two years later in 1986, a half-century after the appearance of the first Appleby mystery.  It's a winning tale too, as I recollect.  Something about bats....
Posted by The Passing Tramp at 3:05 PM