What turned out to be the final novel in Ruth Rendell's near half-century Inspector Wexford saga appeared in 2013, under the title No Man's Nightingale, which is drawn from the poem "Jordan," by George Herbert (1593-1633):

Who says that fictions only and false hair
Become a verse?  Is there no truth in beauty?
Is all good structure in a winding stair?
May no lines pass, except they do their duty
Not to a true, but painted chair?

Is it no verse, except enchanted groves?
And sudden arbours shadow coarse-spun lines?
Must purling streams refresh a lover's loves?
Must all be veil'd, while he that reads, divines,
Catching the sense at two removes?

Shepherds are honest people; let them sing;
Riddle who list, for me, and pull for prime;
I envy no man's nightingale or spring;
Nor let them punish me with loss of rhyme,
Who plainly say, my God, my King. 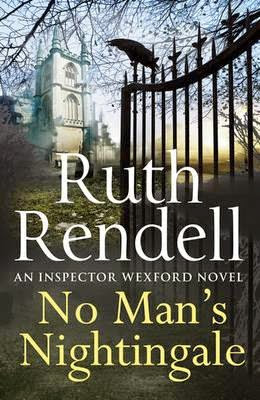 Ruth Rendell denied that she intended No Man's Nightingale as an homage to Agatha Christie's The Murder at the Vicarage (1930), but surely it's hard for fans not to think immediately of Christie, when we read in the opening pages of this final Wexford novel that there has been, well, a murder at the vicarage.  (Of course a title drawn from lines by a metaphysical poet inevitably recalls Dorothy L. Sayers as well.)

Done to death has been Kingsmarkham vicar Sarah Hussain, a theologically liberal, half-Indian, single mother whose installation was upsetting to a number of local conservatives, some of whom objected to her skin color, some to her sex, some to her theological liberalism and some to all of the above.

Are all these still such hot-button issues in England these days?  (Rendell explicitly set the novel in late 2012-early 2013.)  As usual when reading a newer Rendell novel, I tend to feel the author had not really moved on much since the 1990s.  Adding to this feeling is the way Rendell through her spokesman, the now-retired Inspector Wexford, continues to view with dubiety desktop computers (not to mention newer devices), along with modern slang, television, music and dress.

I have always enjoyed Rendell's wry social observations--up to a point.  She was aware too that she did tend to go on a bit, having Wexford asking his replacement, longtime subordinate--for 45 years of novels!-- Mike Burden, whether he, Wexford, is becoming an old curmudgeon.  Burden replies simply, "yes."

Was someone moved to murder the vicar on political grounds, or did the motive arise out of something in her past?  Just who was the father of her beautiful teenage daughter, Clarissa? Improbably, Burden allows the retired Wexford to help with the investigation, including, on occasion, by interviewing people connected to the case.  It's not very plausible, to be sure, but then we accept the fiction of the amateur detective in Golden Age mysteries, so why not here?  Truth be told, while he is not an incompetent nincompoop like Sophie Hannah's deplorable Inspector Catchpool, Burden always can use help. 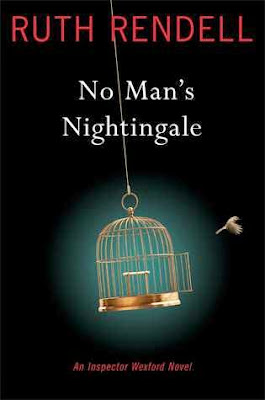 Wexford is reading Edward Gibbon's Decline and Fall of the Roman Empire, and I enjoyed his meditations on this work, especially concerning Gibbon's views of religion.  Some reviewers have decried this material as filler, but religion is the central theme of the novel. Although Wexford's wife, Dora, is a believer, "Reg" himself is not; yet Reg seems to be thinking about religion a lot.  I think at heart the novel is a call for greater tolerance of differing forms of religious belief--not a bad message for the world.

True, Wexford complains about the frequent replacement, in religious services, of the Book of Common Prayer with the Alternative Service Book, but this is on literary grounds, not theistic ones:

"....one generation after another of possible church attenders was growing up without the least knowledge of that beautiful work, probably without knowing it even existed."

At heart, the plot of No Man's Nightingale is, like the Book of Common Prayer, highly traditional. Rendell deigned to provide some genuine clues (including a word clue), though these are to the second murder rather than the first. (The first murder is solved through the solution of the second murder.) There is a lengthy subplot as well, but it is better integrated into the main plot than some of the subplots in previous Wexfords have been.  On the whole I quite enjoyed this final Wexford novel.

At the end of the tale, Rendell made clear there was to be at least one more Wexford novel. (I'm guessing it would have been written this year, had death not intervened.) Yet she also quoted Omar Khayyam, with words suggesting she was aware not only of Wexford's mortality, but, poignantly, her own:

"Ah, make the most of what we may yet spend
Before we into the dust descend."

I'm glad Ruth Rendell wrote No Man's Nightingale, a worthy addition to the Wexford canon.
Posted by The Passing Tramp at 11:27 PM